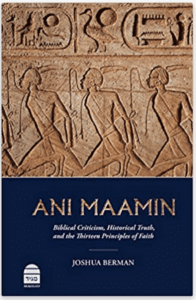 During a recent trip to Atlanta, my wife and I connected two of our Latter-day Saint friends with dear Jewish friends there. Among the many topics of the evening, we discussed a book by an Orthodox Jewish rabbi and scholar, Joshua Berman, a professor of Tanakh at Bar-Ilan University in Israel. I have been touched and inspired by his recent book, Ani Maamin: Biblical Criticism, Historical Truth, and the Thirteen Principles of Faith (Jerusalem: Maggid Books, 2020), and brought an extra copy on my trip as a gift for those Jewish friends. They understand well the challenges of maintaining one’s faith in God and belief in the scriptures in a world where biblical scholarship is increasingly secular and where the scriptures are increasingly viewed as fiction and fantasy. As a scholar and a man of faith, Professor Berman has been able to help many of his fellow Jews cope with the crises of faith they encounter when their secular education seems to undermine the teachings of their religion. His journey in developing answers and providing help to those with crises of faith is directly relevant to some of the challenges Christians in general and especially Latter-day Saints face. I believe the perspectives and answers he provides in Ani Maamin can directly strengthen many of us.

Topics addressed by Berman include historicity of the Bible, with detailed information on the Exodus, the Flood, the numerous inconsistencies in the text, and the related challenges from the Documentary Hypothesis and other theories on the origins of the biblical text. Berman also provides a framework for understanding scriptures through recognizing the goals and methods of ancient writing, noting that our modern expectations can lead us to errant conclusions that can easily be toppled — not because the scriptures are false, but because we often use the wrong lens and apply misguided expectations.

Ani Maamin is Hebrew for “I believe” and is the title of a major work on the principles of Jewish belief by Maimonides, the Sephardic Jewish rabbi and scholar in the Middle Ages also known as Rambam. Berman turns to historical and modern debates about the meaning of Rambam’s work many times. While many portions of the discussion involve issues outside the Latter-day Saint community,  the approach and framework Berman uses should be of keen interest.

Berman notes that conflicts between academic scholarship and Jewish faith once only seemed to trouble the scholars and were not widely discussed, but now the community has reached a “tipping point” where the conflicts have become a more common part of the discourse and have had an increasingly adverse effect throughout the community. Previously, such intellectual challenges were addressed quietly, such as in one-on-one counseling when needed, but now there is a need to be more open about the problems being faced:

What once vexed only scattered individuals now troubles a small but growing part of the community. The cost of not publicly addressing the issue begins to outweigh the cost of confronting the issue in the open. In this situation, the smart money says that bold leaders will emerge winners by taking the lead on the issue, and “owning it,” as it were, controlling the communal agenda and helping to offer guidance. (xvi)

Berman and others have experienced the direct benefits that come with openness as educators recognize the attacks on their faith from secular scholars and attempt to address the issues:

Educators often fear that raising anything associated with academic biblical studies in the classroom will cause more harm than good. My experience and that of many other educators suggests otherwise. I smile when a student in a gap year program says to me, “Oh, I’m not bothered by biblical criticism; my rebbe talked to us about that in high school.” Did her teacher raise let alone solve the entire gamut of challenges that academic biblical studies raises? I doubt it. But young men and women who express this sentiment remind us of something very important: when a young mind is first introduced to anything relating to academic biblical studies by a beloved and trusted educator, it sends the message that we need not be afraid. Ninety percent of the battle is already won, and the chances that that student will experience a crisis of faith later on are diminished. We sabotage our best educational efforts when we pretend critical approaches to the Bible do not exist, and therefore need not even be acknowledged. When our more thoughtful students discover these alternative approaches often after they have left Orthodox educational environments they arrive at a reasonable conclusion: if my teachers never acknowledged any of this, it must be because the tradition has nothing to say in its defense. Worse, they feel hoodwinked, wondering why the wool was pulled over their eyes. With courage and resources, educators can make a huge difference by demonstrating even slight familiarity with some of the methods and claims of the academy. (xvi-xvii)

Berman feels that the Orthodox response to the challenges from secular scholars is more robust now than ever, yet he is frustrated by the attitudes within the Jewish community as too many show blind acceptance of the proclamations of the academy, uncritically embracing “the findings of biblical criticism” when there is no such uncritical acceptance of those theories among biblical scholars themselves. He is also frustrated at the lack of a well developed response to the secular arguments of biblical criticism among  Orthodoxy, with prior responses typically being in the form of short blog posts or brief essays. I agree with him that there is a need for a full-length book to address these challenges, and that Ani Maamin fills an important void:

This book is the first effort by a single author to address these issues in a full-length monograph. The comprehensive analysis afforded by a lengthy treatment is crucial, because so many of the issues in this inquiry are interconnected. Consider the question of the historical accuracy of the Torah’s account of the Exodus. One can indeed pen a single essay that summarizes the evidence for and against. But that will hardly do the issue justice, because to understand how the Torah reports the event of the Exodus, we need to understand how the cultures of the ancient world reported historical events generally. This in turn begs the question of whether it is appropriate to view the Torah ostensibly a timeless document in ancient context. And so a discussion of the Exodus account’s historical accuracy really requires three interrelated discussions. Only a full-length volume allows treatment of the issues and their interdependence with a consistent and coherent voice. (xix)

It is the Berman’s “consistent and coherent voice” in this volume that makes it so valuable, and not just for the Jewish community of faith.

I first encountered Joshua Berman several years when seeking to deal with criticism of Nephi’s account of the journey through the Arabian Peninsula. In article for Interpreter, “Joseph and the Amazing Technicolor Dream Map” (see Part 1 and especially Part 2, where Berman is mentioned), I discussed arguments from an anonymous Latter-day Saint bible scholar who claimed that Nephi’s writings could not be not authentic since Nephi’s account employs numerous themes drawn from the Hebrew Exodus out of Egypt, but Bible scholars now “know” that the Exodus never happened. That account in the Torah is said to have been concocted after the Exile to add stature to the history of the Jews, and thus would be unknown to Nephi in 600 B.C. Berman provided an excellent response to such claims in his essay, “Was There an Exodus?,” Mosaic Magazine, March 2, 2015. A somewhat expanded version of that article is now Chapter 3 in Ani Maamin and is definitely worth reading to provide intelligent answers to challenges from modern scholarship against the Bible as well as the Book of Mormon.

The chapters of Ani Maamin are:

Professor Berman seeks to be a servant of God in showing faithful Jews that there is no need to fear the work of the academy, but there are times when one needs to intelligently push back and recognize the errant assumptions or poor logic that may be behind attacks on one’s faith based on modern scholarship. Some of the issues he explores, such as the reality of the Exodus or the flaws in some claims from source criticism, may be of direct help to Latter-day Saints. Reading this book reminded me of the kinship that Latter-day Saints have with the Jews and the fact that we face some similar challenges in the secular world. I hope that we can continue learning from each other.