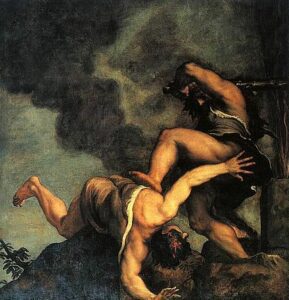 While Noel Reynolds and I felt like we had pretty well mined all the relevant connections between the Book of Moses and the Book of Mormon when we published our list of nearly 100 connections, there’s an important one that we missed. Missing the connection may have been easy to do since the related Book of Mormon verse uses different wording that succinctly summarizes a longer Book of Moses passage, and at first glance appears to just be referring to a familiar story from Genesis. This connection involves Satan’s influencing Cain to slay Abel in Helaman 6:27 and Moses 5:25. Here is the Book of Mormon passage in context from Helaman 6:

25  Now behold, it is these secret oaths and covenants which Alma commanded his son should not go forth unto the world, lest they should be a means of bringing down the people unto destruction.

26  Now behold, those secret oaths and covenants did not come forth unto Gadianton from the records which were delivered unto Helaman; but behold, they were put into the heart of Gadianton by that same being who did entice our first parents to partake of the forbidden fruit —

Vs. 27 tersely shares information not found in Genesis. We learn that: (1) Cain had followers, (2) the murder of Abel involved a covenant with Satan intended to protect Cain from being discovered,  (3) Satan also plotted with Cain and his followers, and (4) that this secret work or secret combination persisted for an apparently long time “from that time forth.”  The biblical account in Genesis 4 tells us that he built a city and had a son, so “followers” might be implied, but not followers among his brethren that join him in a secret covenant or persist in such evil.

Here are some key verses from Moses 5:

28 And it came to pass that Cain took one of his brothers’ daughters to wife, and they loved Satan more than God.

29 And Satan said unto Cain: aSwear unto me by thy throat, and if thou tell it thou shalt die; and swear thy brethren by their heads, and by the living God, that they tell it not; for if they tell it, they shall surely die; and this that thy father may not know it; and this day I will deliver thy brother Abel into thine hands.

30 And Satan sware unto Cain that he would do according to his commands. And all these things were done in secret.

31 And Cain said: Truly I am Mahan, the master of this great secret, that I may murder and get gain. Wherefore Cain was called Master Mahan, and he gloried in his wickedness….

41 And Cain was shut out from the presence of the Lord, and with his wife and many of his brethren dwelt in the land of Nod, on the east of Eden.

42 And Cain knew his wife, and she conceived and bare Enoch, and he also begat many sons and daughters. And he builded a city, and he called the name of the city after the name of his son, Enoch.

So Cain did in fact “plot” with Satan and influenced his brethren to join him. Of course, Cain could have just killed Abel on his own, but I think part of Satan’s deception was leading Cain to believe that he needed protection that could be obtained by bringing others into his murderous plot, thus spreading a terrible spiritual infection. His followers included his brethren, but as the founder of a city with many children, there would also be posterity. Later in Moses 5 we learn that the secret works Cain began persisted as Lamech, a descendant of Cain, also becomes “Master Mahan.” We also learn that those secret works spread among all the “sons of men”:

49 For Lamech having entered into a covenant with Satan, after the manner of Cain, wherein he became Master Mahan, master of that great secret which was administered unto Cain by Satan; and Irad, the son of Enoch, having known their secret, began to reveal it unto the sons of Adam;

50 Wherefore Lamech, being angry, slew him, not like unto Cain, his brother Abel, for the sake of getting gain, but he slew him for the oath’s sake.

51 For, from the days of Cain, there was a secret combination, and their works were in the dark, and they knew every man his brother.

52 Wherefore the Lord cursed Lamech, and his house, and all them that had covenanted with Satan; for they kept not the commandments of God, and it displeased God, and he ministered not unto them, and their works were abominations, and began to spread among all the sons of men. And it was among the sons of men.

There is a detailed story in the Book of Moses about Cain’s covenant with Satan and plot to kill his brother, including details about involving his brethren in a Satanic covenant that obviously persisted and spread among his many brethren and his and their descendants. Multiple verses of Book of Moses material is alluded to in one terse Book of Mormon statement: “Yea, that same being [Satan] who did plot with Cain, that if he would murder his brother Abel it should not be known unto the world. And he did plot with Cain and his followers from that time forth.” This looks very much like an allusion to a more complete source, and chapter 5 of the Book of Moses appears to serve that role perfectly. To me, this looks like one of those “one-way” connections in which the Book of Mormon appears to be depending on an external source such as a text from the brass plates that may have had much in common with the revealed Book of Moses.