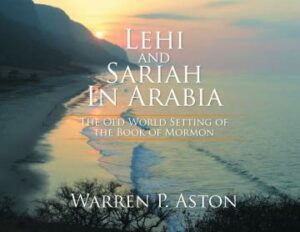 A thorough and valuable book on Lehi’s Trail and the Arabian Peninsula evidence for the Book of Mormon is now available free online, thanks to the generosity of the author, Warren Aston. Aston is an adventurer, scholar, and explorer who has done much to reveal the reality of Lehi’s Trail and to protect the delicate ecosystem at a remarkable candidate for Bountiful, detailed in his 2015 book, Lehi and Sariah in Arabia: The Old World Setting of the Book of Mormon. Book of Mormon Central is now providing the PDF files for each chapter of the book. This a book worth studying. I still prefer my Kindle edition for the ability to search the entire book, but in any format this book is one of the best ways to understand some vital aspects of the Book of Mormon in a new and granular way.

The chapters of the book are:

Part 1: Lehi and Sariah’s World, pp. 10–34
Part 2: “Into the Wilderness”, pp. 35–58
Part 3: “The Place Which Was Called Nahom”, pp. 59–93
Part 4: “Travel Nearly Eastward From That Time Forth”, pp. 94–100
Part 5: “We Called the Place Bountiful”, pp. 101–155
Part 6: “Out of Obscurity”, pp. 156–186
Part 7: New World Memories of “Bountiful”, pp. 187–196
Part 8: “Towards the Promised Land”, pp. 197–220
Appendix 1: Yemen, the Land of the Queen of Sheba by Yusuf M. Abdullah, pp. 221
Appendix 2: Some Notes on the Tribal Origins of NHM, pp. 222–227
In this book, you will learn about some of the peoples of the Arabian Peninsula through the eyes of Warren Aston, who has studied Arabic and invested much time in exploring Oman as well as visiting parts of Yemen and Arabia. You will learn about the challenges of travel, about the terrain, the water sources, other resources, modern and ancient communities, and the bounty of evidence associated with major points along Lehi’s Trail from the beginning to the end. We are greatly blessed to have this kind of resource with so much carefully acquired data and scholarship adding depth and understanding to the masterpiece that we have in the Book of Mormon.