A delightful trend in modern Book of Mormon criticism today is to scour books, articles, and maps for information that hypothetically could have aided Joseph Smith in fabricating many of the interesting details of the Book of Mormon. Whether it’s Nahom and Bountiful in the Arabian Peninsula and the many other Arabian evidences for the plausibility of Lehi’s trail, the ancient practice of writing on metal plates, the many correspondences between the Book of Mormon setting and ancient Mesoamerica including the existence of ancient written records, temples, roadways, and buildings of cement, or textual issues like chiasmus and Hebraisms, there is a concerted effort, now aided with advanced computer searching across tens of thousands of documents, to find bits and pieces of numerous scattered “smoking guns” to create the case that the book is simply a product of Joseph’s environment. I find this delightful and perhaps a little ironic because many of the apparent Book of Mormon strengths for which related modern sources are being sought began as Book of Mormon weaknesses. This is readily evident for language issues such as the silliness of Alma as a man’s name, now verified as an ancient Jewish man’s name, or the horrific blunder (now known to be a perfectly appropriate Hebraic expression) of Moroni waving the rent of his garment (repaired later to be the rent part of his garment). But many other early weaknesses are now strengths to be undermined.

Recently we have discussed some of the interesting broad archeological issues noted by Dr. John E. Clark, which raised the issue of whether knowledge of ancient advanced civilizations in the America was actually common knowledge or not. Evidence that it was not common knowledge, in my opinion, is the great surprise caused by the 1841 publication of John L. Stephens, Incidents of Travel in Central America, Chiapas and Yucatan, 2 vols. (New York: Harper and Brothers, 1841). It was a surprise to many educated people but especially to the Mormons, who now had evidence at last to confront some of the arguments being levied against the Book of Mormon. In the discussion of the value and originality of Stephens’ work, the critics often view the significance of his work for Mormons as merely establishing that there were ancient civilizations in the Americas — something that a number of other people had written about without creating widespread interest and awareness among citizens of the United States. But in fact, Stephens’ work did far more than that. Understanding the correspondences between Stephens’ report and the claims of the Book of Mormon helps remind us that the evidence from the Americas pertaining to the Book of Mormon is much more than just “yes, there was an ancient civilization.” It reminds us that if Joseph Smith was the source of the Book of Mormon, his luck or his success in research about the Americas went far beyond just being right about the existence of ancient civilization.

First of all is the issue of geography. The Book of Mormon describes ancient civilizations with written records that were in a relatively small area (no, a hemispheric model advocated by some early Mormons simply does not fit the travel distances given in the text) with a narrow neck of land surrounded by oceans. Using the internal geographical references in the Book of Mormon, one can construct a highly self-consistent map (this alone is quite surprising if the book is Joseph’s crude fabrication dictated from a hat). With that internal map,  we can then ask the question: can this map possibly fit anywhere in the New World? Latter-day Saint scholars familiar with the geographical issues have a fairly broad consensus that Mesoamerica, right around the region explored by Stephens, is the only potentially plausible location for the internal map of the Book of Mormon to have any hope of overlaying real geography. It is a place with a narrow neck of land, oceans, at least one excellent candidate for the River Sidon that flows north for at least part of its run, a place where battles fought in winter are not fought waist-deep in snow but in a climate where warriors can still be weary in “the heat of the day,” etc. What is amazing is that the only place where the geography might line up with reality is also the only place where ancient peoples kept written records. It is a place unlike Joseph’s environment where ancient temples and roads were built. It is the only place where the geology also lines up, with active volcanoes and earthquake faults in the time frame required for the apparent volcanic and seismic activity we encounter in 3 Nephi. Those details aren’t found in Stephens or other sources Joseph could have seen. Nor is one other important correspondence between Mesoamerica and the Book of Mormon: the rise and dating of two major civilizations or clusters of civilizations. Below is a figure from Dr. Clark’s “Archaeological Trends and Book of Mormon Origins,” BYU Studies, vol. 44, no. 4 (2005) which compares the cities of the Jaredites and the Nephites with the general time frame of the Olmecs and Mayans in Mesoamerica. He is not arguing that the Nephites or Lamanites were Mayan, but that the rise and fall of major civilizations in Mesoamerica (which included many sister groups) provides an environment and time frame which could accommodate the major groups of the Book of Mormon. 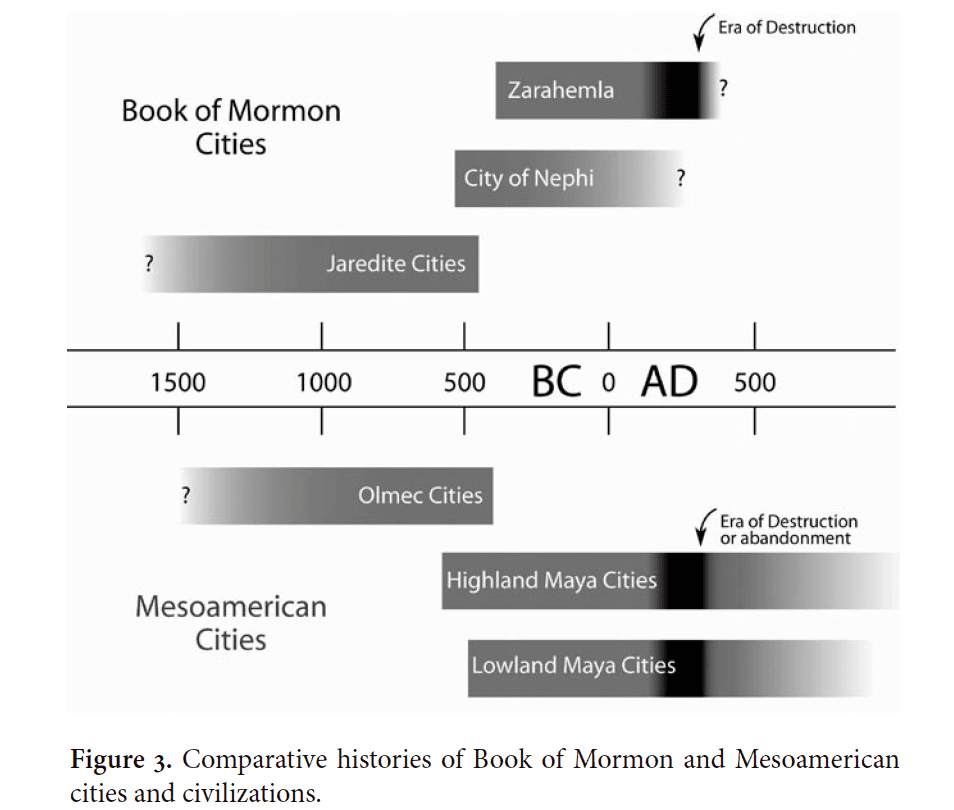 The rise and fall of two civilizations is an important issue which I don’t think Joseph could have snatched from sources in his day. In this, the Book of Mormon merits credit for a further correspondence with Mesoamerica, even to the point of implicit carryover from the first civilization to the second, as occurred in Mesoamerica and as is found in shared names between Jaredites and Nephites, especially Nephite dissenters or rebels. It appears that the total destruction Ether saw was the total destruction of two armies, while some Jaredites escaped and were around to influence later cultures after the Nephites moved in.

Back to Stephens’ work, Joseph Smith had a shift in his thinking about Book of Mormon geography when he encountered it. He said that we would do well to compare the cities of the Book of Mormon to those explored and discussed by Stephens. He then saw Mesoamerica as the likely place for Book of Mormon happenings in the New World, as is carefully explained by Matthew Roper in “John Bernhisel’s Gift to a Prophet: Incidents of Travel in Central America and the Book of Mormon” (Interpreter, 2016). Roper then discusses further contributions of Stephens to the issue of Book of Mormon evidence of plausibility. Roper shows how Stephens’ publication also gave Mormons evidence related to Book of Mormon plausibility on the following topics, though not all of the following issues were discussed as being of interest in that era:

As previously noted, the idea that ancient Native Americans had written records was still hard to accept for many. Many viewed the glyphs as symbols related to astronomy rather than a versatile written language. It would take decades for the nature of ancient Mesoamerican writing to become widely known. Meanwhile, in spite of Stephens’ immensely helpful publication, critics would continue to attack the Book of Mormon unnecessarily on issues such as the existence of ancient writing systems.

Roper notes that one critic in 1839 wrote, “According to Mormon, these native Americans could read, and write, … but when that country first became known to Europeans, the inhabitants knew no more about letters than a four-legged animal knows the rules of logic; and not a scrap of writing was to be found.” An 1840 critical publication claimed that there was not “even so much as a shadow or proof, that the sciences of reading and writing [and other evidences of advanced culture mentioned in the Book of Mormon] were ever known here.”

Some of the items listed above are mentioned in some much less well known sources that may not have been known to LDS people before Stephens created so much interest in this area. Some such as nakedness or the use of specific weapons and armor could happen in a variety of places, But the abundance of correspondences in Mesoamerica, not just from geography alone, makes the impact of Stephens’ work much more interesting than merely showing/confirming that ancient civilizations once were here. There are many surprising details — especially if you dig into the 800 or so correspondences compiled by John L. Sorenson in his remarkable Mormon’s Codex, some of which are interesting examples of Book of Mormon weaknesses that are becoming interesting strengths, though yes, puzzles and problems remain. Just not as many as we faced in the 1830s. Some things that were laughable then are much less ridiculous today.

105 thoughts on “Evidence At Last: The Many Aspects of John Lloyd Stephens’ Work That Strengthened Mormons in the 1840s”