My previous post, “Don’t Google ‘Spectacles,’ Google ‘Goggles’: The Nephite ‘Interpreters’ as a Book of Mormon Anachronism” (hereafter Part 1), raised the possibility that ancient Mesoamerican “goggles,” sometimes depicted as gear for both deities and humans, might have some relationship to the Nephite/Jaredite concept of mystic stones for revelatory purposes. The Nephite “interpreters” that were buried with the gold plates of the Book of Mormon were said to comprise two stones set in a silver frame that looked like “spectacles.” But perhaps “goggles” may be the right word to Google when determining whether the interpreters are anachronistic or not.

Adding to the images shown in Part 1, here’s a relic found in Veracruz State in Mexico, as shown at Mesoweb.com, an “enormous terracotta brazier [that] depicts a deity with the characteristic round goggles and protruding mouthpiece that appear so frequently in Teotihuacan and later became associated with Tláloc, a widespread Rain/War god in Post-Classic Mesoamerica.” Goggles seem to be most typically associated with the Aztec storm god, Tlaloc, also called the god of rain and a god of war. 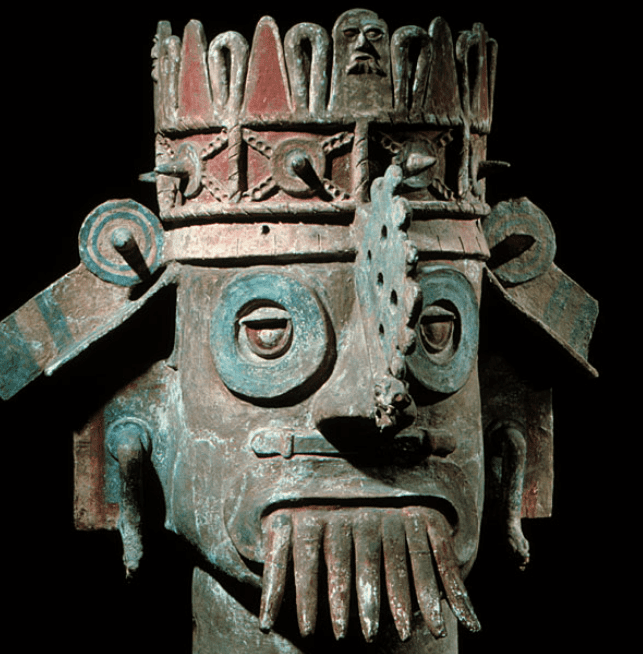 Here’s a detailed view of Tlaloc, which seems to have goggles on the forehead above the eyes: 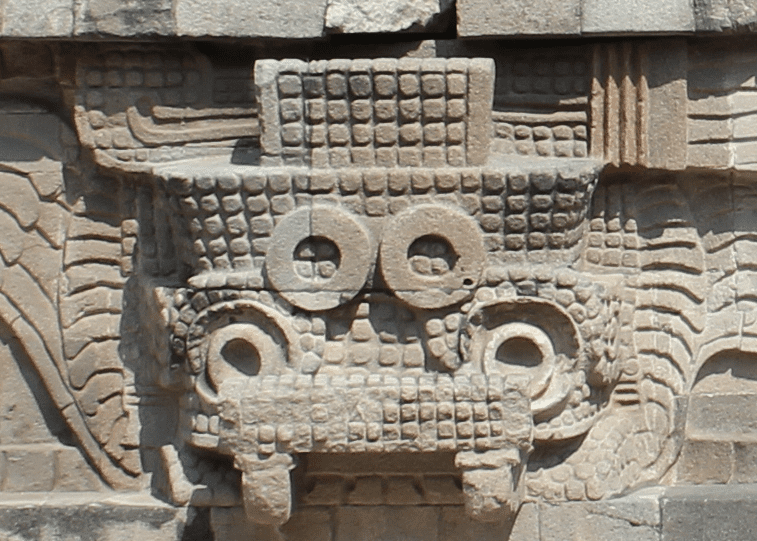 Page 28 of the Aztecan Codex Borgia, housed at the Vatican Library, has several similar images of Tlaloc. Here is a detail, as labeled by Dr. Helen Burgos Ellis for the Khan Academy, showing the characteristic “goggle-eyes” of the god: 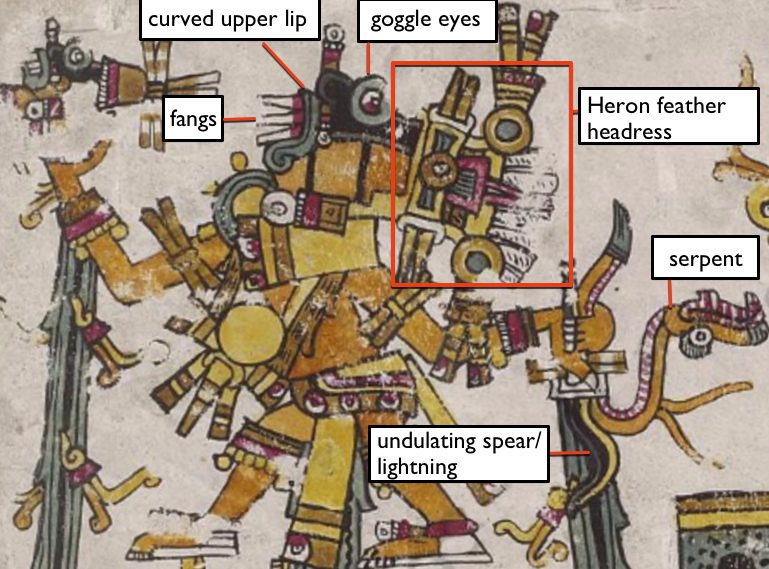 Humans are also depicted wearing goggles in Mesoamerican artifacts, with the goggles sometimes shown on the forehead (perhaps to more clearly show that there are sacred or mystic goggles present and not just big round eyes). Here’s one example, also from Mesoweb.com, dated to 300 to 550 A.D.: 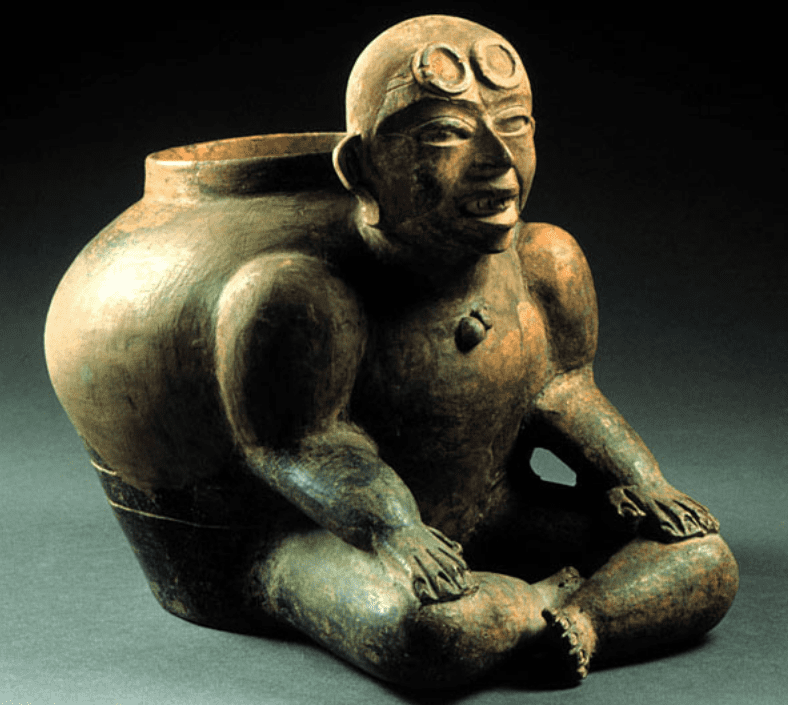 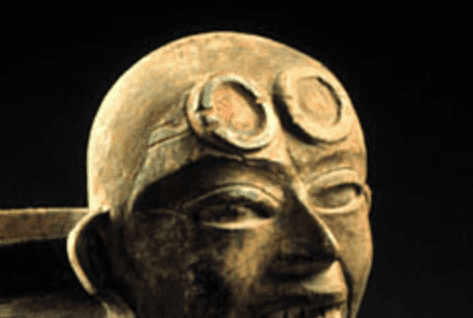 Looking more closely at the goggles, it looks like they aren’t just circles stuck on the head, but have a supporting structure that disappears under the hair. If it were a cloth band, it would go over the hair. Could this be part of a solid frame, like those of modern spectacles, that can slide under the hair of the head? Looking closely, that might be the case. Color me speculative, but these could fool some of us modern viewers into thinking it looks somewhat like “spectacles” with a rigid frame.

Let’s turn again to the excellent 2018 article, “Goggles,” from the Hammocks and Ruins blog. Regarding the origins of Mesoamerican goggles, the roots go back to the Olmecs, whose chronology can fit with the Jaredite culture of the Book of Mormon:

Most images of a goggled sculpture refer to the Rain God Tláloc. His goggled mask stemmed initially from the Olmec sources, the first Mesoamerican civilisation, and moved simultaneously into the Teotihuacán, Maya and Zapotec. The mask from Veracruz is principally understood as a Jaguar being (worshipped first by the Olmecs); however there are also the overriding implications of the ‘Midnight Owl’. The Teotihuacános are thought to have derived the infamous feathered-serpent from the image of an owl fetching a serpent from a cave (with the ability to traverse its darkness). Mexican art historian, Miguel Covarrubias, demonstrated that later images of Quetzalcóatl, feathered serpents, and rain gods like the god Tláloc were all derived from the Olmec were-jaguar (half jaguar and half human being), who served also as a rain deity for the Olmecs, and was associated with sacrifice and the underworld (the Olmec rain deity did not wear goggles; that was added later by other Mesoamerican cultures).

So the concept of goggles in Mesoamerica goes back to the Olmecs, but became prominent among later Mesoamerican cultures, just as the “interpreters” began with the Jaredites, and became important among the leaders of the Nephite faith. They are connected to Quetzlcoatl and other Mesoamerican gods, but can be used by humans, and are related to the concept of an owl traversing the darkness and seeing through darkness. That seems consistent with Alma’s statement about the interpreters when they are passed to his son Helaman’s charge in Alma 37:

22 For behold, the Lord saw that his people began to work in darkness, yea, work secret murders and abominations; therefore the Lord said, if they did not repent they should be destroyed from off the face of the earth.

But it’s earlier in Mosiah 28 where we get a description of these ancient interpreters:

10 Now king Mosiah had no one to confer the kingdom upon, for there was not any of his sons who would accept of the kingdom.

12 And this he did because of the great anxiety of his people; for they were desirous beyond measure to know concerning those people who had been destroyed.

13 And now he translated them by the means of those two stones which were fastened into the two rims of a bow.

14 Now these things were prepared from the beginning, and were handed down from generation to generation, for the purpose of interpreting languages;

15 And they have been kept and preserved by the hand of the Lord, that he should discover to every creature who should possess the land the iniquities and abominations of his people;

16 And whosoever has these things is called seer, after the manner of old times.

Two stones fastened between the rims of a bow: that sounds like a rigid bow, or a frame of some kind. Could it fit on the head as shown in the image above of the human with goggles on his forehead?

The Hammock and Ruins article also gives an example of a Mixtec mask with goggle-eyes that could have been worn in rituals by a priest. They also observe the close relationship between Tlaloc and Quetzalcoatl, in which Tláloc in at leat one case “acts as Quetzalcóatl’s avatar, the feathered serpent…. Scholar Cecelia Klein has suggested that the ringed eyes of Tláloc refer to a mirror, which represents fire or water, which are other attributes associated with the Feathered Serpent.”

Reviewing the symbolism of the googles covered in the article, the author states:

So the symbolism identified so far is the social status, star (deity), water (symbol of the underworld), owl (ability to see in the dark underworld). Our ball player example fits the bill in that sense as well. The ancient ball game (invented by the Olmecs and adopted by the whole of Mesoamerica) was seen as a struggle between day and night, and a battle between life and death. Ball game courts were considered portals to the underworld. Through the game, the players (including the kings) confronted the forces of the underworld to obtain rebirth and fertility. By playing the game, they symbolically entered the underworld to match themselves against its leaders, to defeat death and recreate life. (I deal with this topic in more detail in my post Ball Players.) In the underworld, they would have needed the owl’s ability to traverse through darkness, hence the use of the goggles. So it seems all the symbolisms are connected with each other.

Some of these concepts may relate to the Book of Mormon teachings on the interpreters (see above), which explain that the interpreters not only help bring revelation/light out of darkness, but help in overcoming and defeating the works of darkness pursued by the Adversary and his followers.

The role of goggles in Mesoamerican lore covers multiple cultures and many centuries, so there’s not one simple idea to capture it all. But there are some potential overlaps with the Book of Mormon, enough to wonder if either Mesoamerican goggle themes might have influenced some Jaredite prophet to fashion a goggle-like device to hold the sacred revelatory stones he used, or if the use of such a tool by Jaredite and Nephite seers might have inspired related practices and themes among Mesoamerican neighbors. Your thoughts?

If nothing else, the next time someone says that Joseph’s “spectacles” from ancient American were a ridiculous anachronism, you can admit that they are absolutely right — based on what scholars understood in Joseph’s day. But in terms of what we are learning today about ancient Mesoamerica, we can at least say that sacred “goggles” worn by priests and gods were known in ancient Mesoamerica, and theoretically could have some relationship with the Nephite and Jaredite interpreters. That’s still speculative, but does suggest that Nephite “interpreters”/”spectacles” might not be as ridiculous as once thought.

37 thoughts on “Ancient American Goggles and the Nephite/Jaredite “Interpreters,” Part 2”