When Joseph Smith received the gold plates of the Book of Mormon, he also apparently obtained the Nephite/Jaredite “interpreters,” said to be like “spectacles,” that could be used to assist the prophetic work of translating the plates. Spectacles? From ancient America? Isn’t that just a bit anachronistic, given that spectacles or eyeglasses are a relatively modern European invention?

First, when I hear statements about well-known modern European inventions, you know, things like the world’s first mass-produced book, movable type, the blast furnace, paper money, and smallpox vaccination, it’s often good to check if these things may have actually been invented in China, as was the case for all these items, as we’ve learned from decades of research by Cambridge scholar Joseph Needham and his successors. No, the Gutenberg Bible, wonderful as it was, came over a century after the world’s first mass-produced book printed with movable type, the Nong Shu (or the Book of Farming) by Wang Zhen in 1313, an amazing story that was recently recognized and honored by the Paper Industry Hall of Fame in my town of Appleton, Wisconsin.

Eyeglasses can trace their origins to Italy, but China deserves some credit for sunglasses, as do the Inuit Indians of North America. The Inuits used ivory from walruses carved with small slits that could be placed over the eyes to reduce the intensity of light reflected from the snow and help them prevent sun blindness (see “Who Invented Eyeglasses?“). But surely that Native American innovation had nothing to do with the “interpreters” of the Book of Mormon, right? Right, as far as I know.

The story of the coming forth of the Book of Mormon gave the world several apparent anachronisms before a single word of our Book of Mormon ever made it into ink. Some of these earliest Book of Mormon problems are are arguably no longer relevant in light of growing evidence for their plausibility, including the existence of ancient writing on metal and the use of stone boxes to bury sacred treasure in the ancient Americas. But one of these initial issues remains that I’ve seen used by critics several times recently, including in comments on this blog, to question the plausibility of the Book of Mormon. It’s the argument that the Nephite “interpreters” (sometimes called a Urim and Thummim) that were included with the gold plates, are anachronistic based on their description as being like “spectacles.” Actual spectacles or eyeglasses, after all, are a fairly recent modern invention that were not in use anywhere on earth, as far as we know, in 400 A.D. or earlier.

Are we sure the “interpreters” looked like spectacles? Several descriptions are shared in the Book of Mormon Central article, “Is There Evidence That Joseph Smith Possessed a Urim and Thummim and Breastplate?,” Feb. 18, 2018:

Joseph Smith described the Nephite interpreters (which, over time, came to be known as the Urim and Thummim) as “two transparent stones set in the rim of a bow fastened to a breastplate.” Martin Harris said they “were about two inches in diameter, perfectly round, and about five-eighths of an inch thick at the center; but not so thick at the edges where they came into the bow.” He added that they were “white, like polished marble, with a few gray streaks.” John Whitmer called them “two crystals or glasses.” Lucy Mack Smith said they resembled “two large bright diamonds.”

David Whitmer reported that they were “white stones, each of them cased in as spectacles are, in a kind of silver casing, but the bow between the stones was more heavy, and longer apart between the stones, than we usually find it in spectacles.” William Smith further explained that a “silver bow ran over one stone, under the other, around over that one and under the first in the shape of a horizontal figure 8 much like a pair of spectacles.” [footnotes omitted]

The word “spectacles” is used a couple of times, and the word “glasses” is also mentioned. That also seems consistent with the brief description of the ancient Jaredite interpreters that the Nephites had apparently received (a topic for discussion later, but see Don Bradley’s excellent book on the 116 lost pages of the Book of Mormon), said to comprise “two stones which were fastened into the two rims of a bow” (Mosiah 28:13).  Based on the published history of spectacles or eyeglasses, those terms certainly seem out of place in Jaredite and Nephite times. The website AntiqueSpectacles.com offers a timeline for the development of spectacles or eyeglasses, dating the origin to Pisa, Italy in 1286 AD. The site also exposes several artistic blunders in which paintings erred by showing spectacles in use during the time of Christ.  See “Two Unique Anachronisms Showing Eyeglasses.”

Unfortunately, it thus seems that anyone Googling “ancient spectacles” will quickly find evidence that it was unlikely for ancient Americans, Mesoamerican or otherwise, to have known about spectacles. Were there optometrists among the ancient Americans providing the Nephites with eyeglasses or spectacles? Of course not. So is there any hope for plausibility for the Nephite and Jaredite “interpreters,” one of the first issues that may arise in considering the plausibility of the Book of Mormon account? Trying to turn Inuit “sunglasses” into “spectacles” doesn’t seem helpful: they were just slits in ivory, not glasses, and I don’t believe we have evidence that they were in use well before 400 A.D.

However, this problem, as happens in many debates, may be influenced if not largely determined by the assumptions we make, which then affect how we search and what evidence we look for and find. The interpreters, though looking like spectacles or eyeglasses to some modern witnesses, were not spectacles that help correct vision in daily life. They were stones held in a frame, perhaps translucent, but certainly not simple corrective optics designed for any individual’s poor eyesight. They were not ordinary tools for anyone to use, but were mystic, revelatory tools to help a prophet bring forth light out of darkness, to reveal information such as translating ancient scripture, in some kind of sacred experience involving vision. They were tools for a prophetic seer, not for ordinary seeing in ordinary light.

Maybe we need to consider something other than “spectacles” or “eyeglasses” when we explore the potential ancient parallels to the ancient “interpreters” Joseph had.

I’ll offer one suggestion that didn’t occur to me until I opened up a newly purchased used book on Mesoamerica and almost immediately saw this while looking for something else: 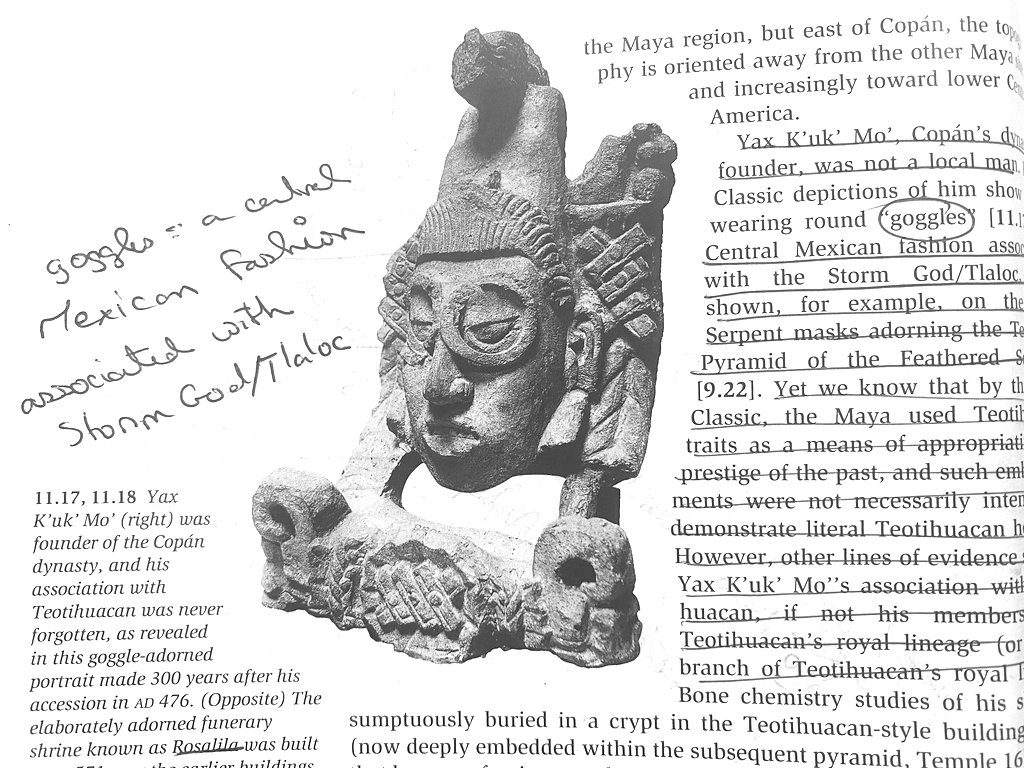 The book is Susan Toby Evans, Ancient Mexico & Central America: Archaeology and Culture History, 2nd ed. (New York: Thames and Hudson, 2008, first published 2004), and the image is from p. 306. This “goggle-adorned portrait” depicts the founder of the Copán dynasty. Here the goggles may be used to link the subject to the Storm God known as Tlaloc or to highlight his association with Teotihuacan, where goggle imagery abounded.

Goggles! Interesting. So here’s one speculative suggestion for new perspectives on “spectacles”: rather than Googling “spectacles,” what would happen if we Googled “goggles” or, more specifically, “Mesoamerican goggles”? When I tried that, there was quite a surprise. The first hit for my search was a remarkable article showing and discussing numerous examples of figures from ancient Mesoamerica wearing goggles. The article is “Goggles,” dated Dec. 18, 2018, from the outstanding website Hammocks and Ruins by a couple of Mayan enthusiasts and adventurers. Here are a couple images from the article and a few I’ve found at other sources: 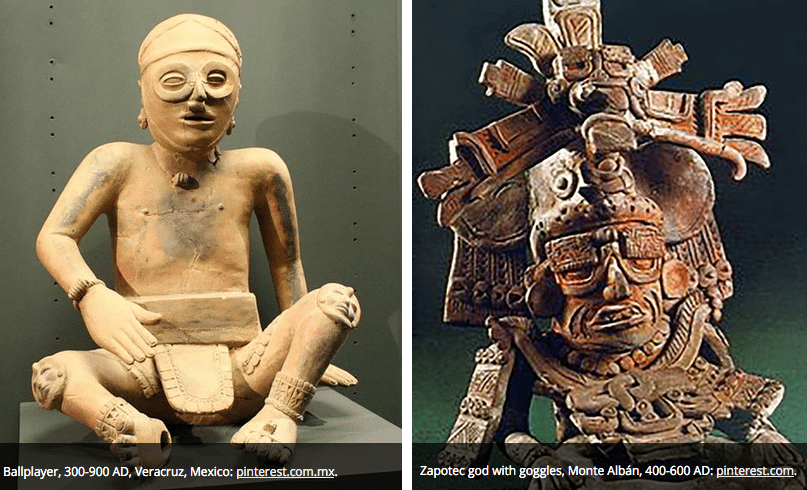 Here is a Totonac culture figurine from El Zapotal in Veracruz at the Xalapa Museum of Anthropology (though the photo is of a replica in the National Museum of Archaeology in Mexico City) . See “‘Spaceman’” at the Mexicolore website. This appears to be a human ball player. Are the goggles meant to be personal protective equipment or do they play a mystical role? 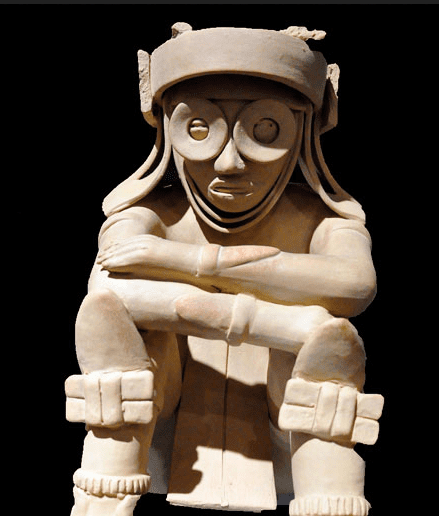 And here’s a Mayan figurine also depicting the founder of the Copán dynasty, shown at Mesoweb.com: 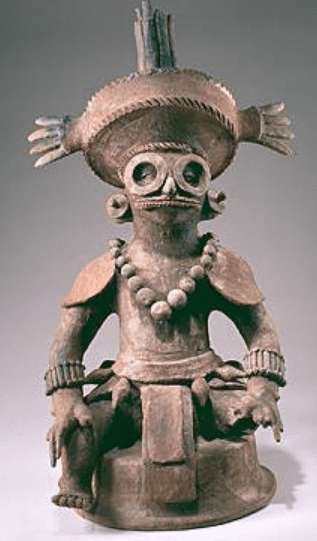 Here’s an image of the Storm God Tlaloc from Wikipedia: 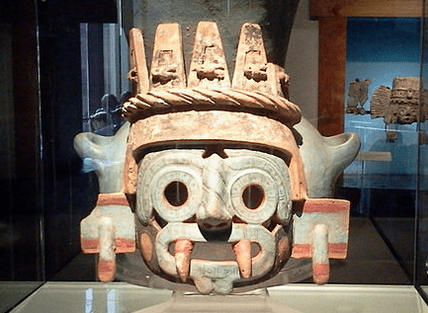 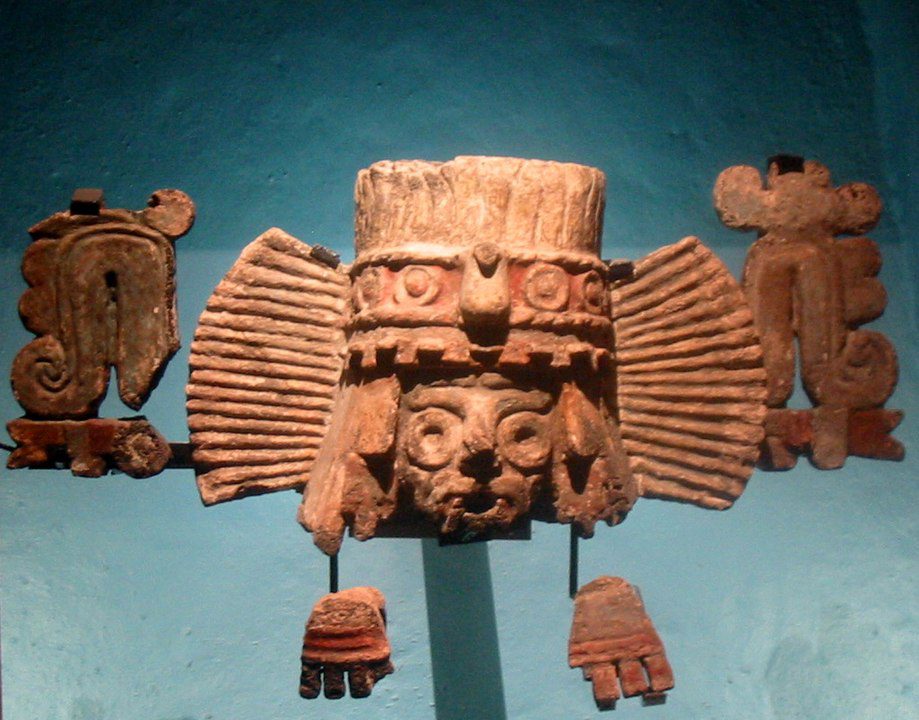 Based on their survey of the literature, the authors at Hammocks and Ruins say this about the meaning of goggles in Mesoameria:

The images above show that goggles were worn by gods, rulers, ballplayers and warriors. So what did they represent? Here is a summary of the various symbolic meanings of the goggles that I have found so far:

Could it be that legends of a mystical means for gaining divine vision spread from either the Jaredites or  Nephites and became associated with a mystical adornment associated with powerful gods, with seeing in darkness, and elite priestly status? Or could the transfer have gone the other way, with a Mesoamerica google-theme influencing the way humans framed the mystical stones used in the interpreters? In either case, perhaps it’s worth further exploration.

Yes, highly speculative, but I hope you find it to be an interesting possibility.

More thoughts and information on this issue to follow in Part 2.

8 thoughts on “Don’t Google “Spectacles,” Google “Goggles”: The Nephite “Interpreters” as a Book of Mormon Anachronism”