Important new evidence for the plausibility of Lehi’s Trail in the Book of Mormon has just been published based on 2019 fieldwork in the Arabian Peninsula by Warren Aston. See Warren P. Aston, “Nephi’s ‘Shazer’: The Fourth Arabian Pillar of the Book of Mormon,” Interpreter: A Journal of Latter-day Saint Faith and Scholarship 39 (2020): 53-72. It just came out today, Aug. 21, 2020. I’m amazed at what he has found. In my opinion, he has turned what used to be a minor question mark into one of the major “pillars” of evidence for the Book of Mormon’s account on Lehi’s Trail, bringing Shazer into the limelight with the River Laman in the Valley of Lemuel, the place Nahom, and the miraculous and still largely uninhabited leading candidate for the place Bountiful, Khor Kharfot with Wadi Sayq.

One of the most interesting finds reported in this article was just how accurate and plausible Nephi’s words may have been regarding the trip to Shazer:

Many of us have long assumed that after Lehi and his family were done camping in the Valley of Lemuel, they had to backtrack toward the east to get back on the main trails that could take them further south. Once Wadi Tayyib al Ism was discovered by George Potter and became widely accepted as a plausible candidate for the improbable river and its valley, those looking at satellite maps also made that assumption. But there’s something we’ve long overlooked until now.

Aston notes that the most likely site for a safe, comfortable, long-term encampment in the valley would probably be the oasis in the center of the satellite image below. The winding red line going from the east to the Red Sea on the west corresponds to the Valley of Lemuel and shows the likely route Lehi followed. One amazing aspect from Aston’s latest report is that there is a route south from the Valley of Lemuel, actually one one route within the valley, and that route can lead easily to the most probable candidate for Shazer. That route begins almost immediately across the river from the campsite, so Nephi’s terse description of packing up the tents, crossing the river (probably still small enough anciently to just walk across under normal, non-flooding conditions), and moving south-southeast toward Shazer fits the landscape with remarkable precision. Nephi’s description implies that the campsite was on the north of the river, and that the river and the valley ran from east to west, at least at this point, which is what we see in the region with the campsite candidate. Significantly, no backtracking would have been required to go from the most likely encampment to the most likely site for Shazer. 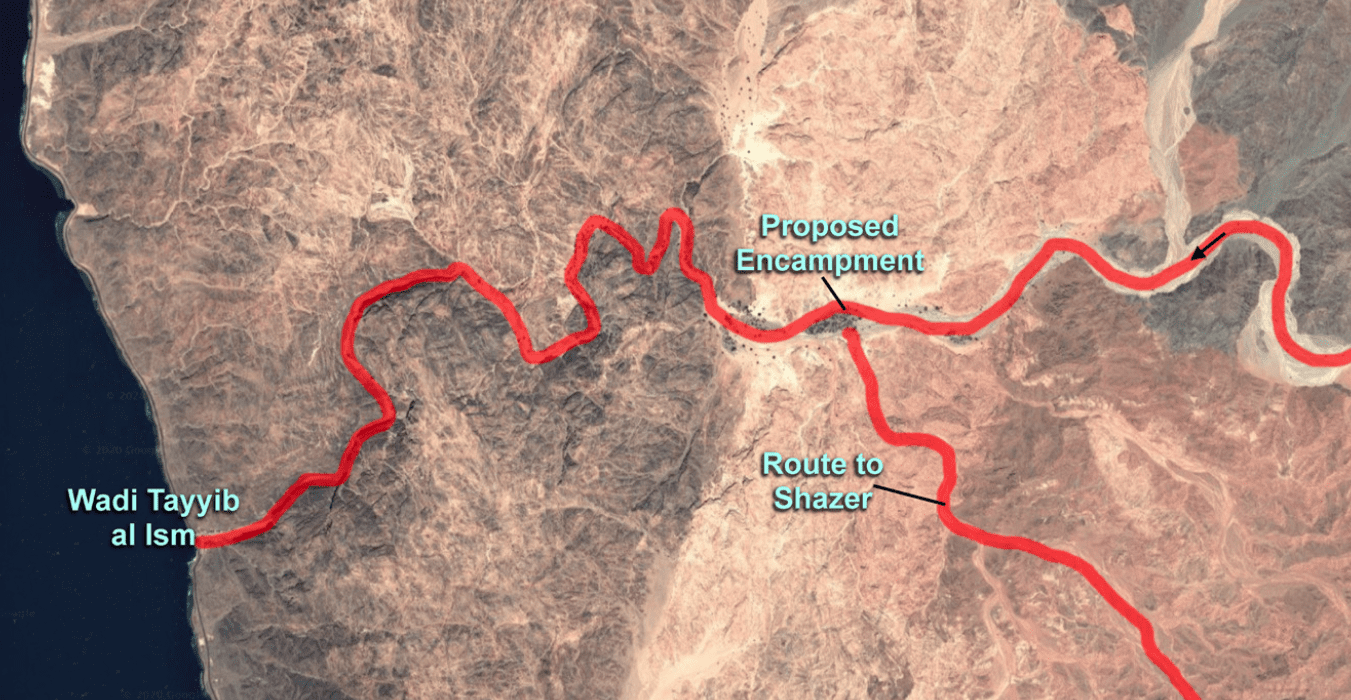 Interesting finds continue as Aston explores several candidates that have been proposed for Shazer. Based on the possible etymology of the name, Aston explains why Nibley’s proposed link to a word referring to trees is most likely, and suggests that the place Shazer might stand out for its trees. Nephi’s text also requires that it be near wilderness where they could hunt animals, and that it must be reachable within a journey of 4 days from their encampment in the Valley of Lemuel. Remarkably, Wadi esh Sharma near Sharma on the coast of the Red Sea appears to be the most probably candidate for Shazer. It is a region where ibex still can be hunted in the mountains and where there are abundant trees and two oases. The route from the Valley Lemuel accurately fits Nephi’s description, lying roughly south-southeast from the campsite and being with a distance reachable via camel in four days. A route that Lehi may have traveled to the oases is marked in red below. 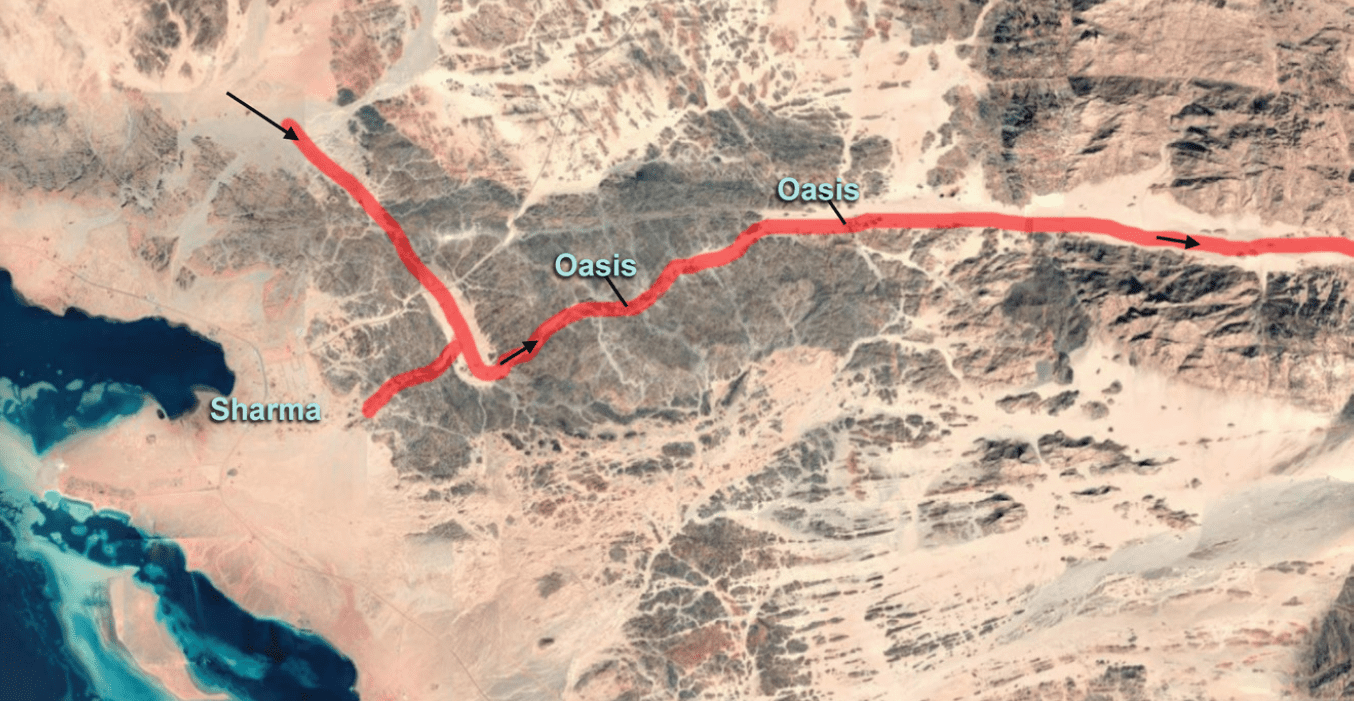 His final image, shown below, is a reminder of the big picture and the significant details in Nephi’s description, with plausibility that goes far beyond what Joseph Smith could have managed based on what was known in his environment, especially given that highly educated people to this day have dismissed many elements of Lehi’s Trail as impossible or ridiculous. It used to seem that way, I’ll admit, but in my opinion, the Book of Mormon seems to be aging well. 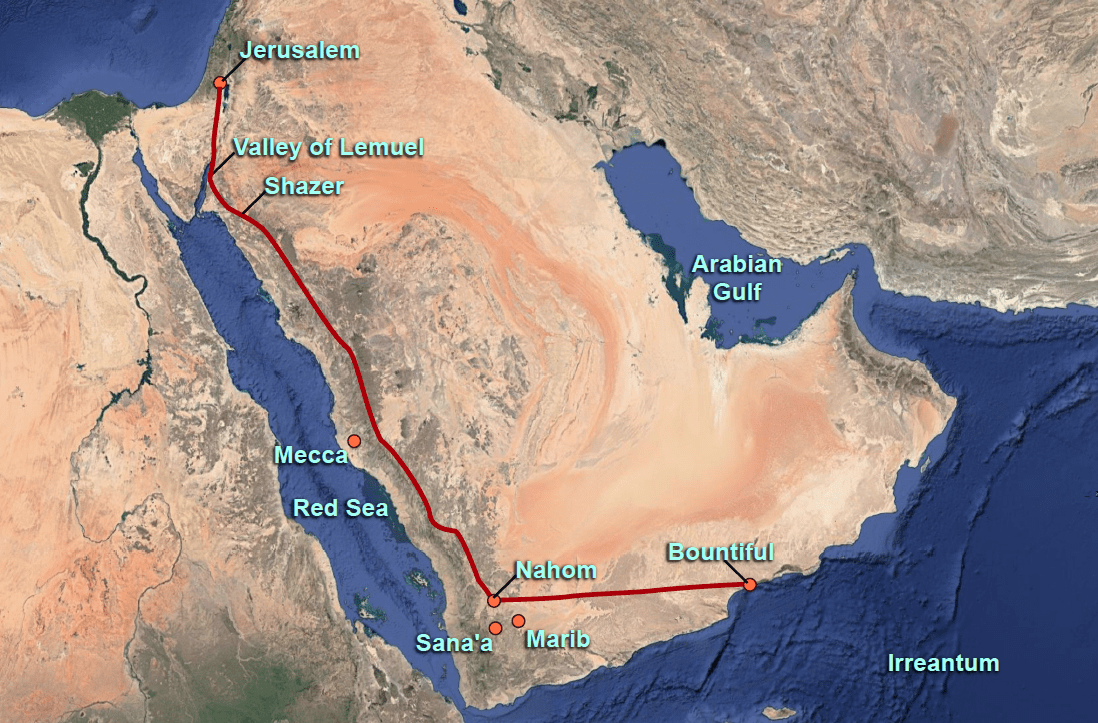 By the way, if you haven’t read anything by Warren Aston before, this is a good time to start. Lehi’s Trail cannot be understood without understanding what he has published, including his extensive information on the multiple candidates for Bountiful and the place Nahom with key archaeological finds there. I don’t know how Warren keeps coming up with such amazing finds — I think it has taken a lifetime of preparation and endless sacrifice of time and funds to be able to not only learn his way around Arabic speaking nations, but to also go to the right places after taking the right steps to critically assess textual and geographical data. To understand some of what he has contributed to our knowledge of Lehi’s Trail, please read his brilliant work, Lehi and Sariah in Arabia: The Old World Setting of the Book of Mormon (Bloomington, IN: Xlibris Publishing, 2015). His older book, In the Footsteps of Lehi, is also a beauty worth owning.

Warren’s fieldwork began by returning to Wadi Tayyib al Ism, a stunning candidate for the Valley Lemuel and the River Lemuel that can be reached following the directions in the Book of Mormon. According to a plausible and preferred reading of the Book of Mormon, this seemingly impossible (but actually still flowing) small “river” should be in a valley that is a 3-days’ journey south of the northern tip of the Red Sea in the Gulf of Aqaba. By the way, some have suggested that Nephi’s words also could be taken to mean a 3-day journey from Jerusalem itself, but I explain why I think that is not the proper reading of the text in another post, “Three Days to the Valley of Lemuel — But From Where?,” Jan. 26, 2020. But even if there are two divergent ways to read the text, the fact that one leads to amazingly accurate correspondences with the real geography of the area suggest that the more interesting reading is on track.

For a book that is often assumed to be nonsense spewed out by an ignoramus, the Book of Mormon, as I mentioned, seems to be aging well as it approaches its second century. The account in the opening chapters of an audacious journey through the Arabian Peninsula is a case in point. So much of it could be dismissed out of hand as soon as it was published, with arguments that have been repeated right up to the present era, for “everyone knows” that Arabia is rich in sand but generally lacks things like the river flowing into the Red Sea called the “River Laman” in the “Valley of Lemuel” supposedly on the Gulf of Aqaba, and certainly could not have a seemingly uninhabited rich fertile place like Bountiful due east from the place Nahom. Strangely, these blunders have become strengths of the Book of Mormon, as surprisingly strong candidates for each of these places have been found in places that fit the text and with some intricate details that strengthen the case for their plausibility — even hard archaeological finds showing that a Nahom-like name (NHM) was present in 700 B.C. in the general region that makes the most sense for Nahom. It boggles the mind to think that Joseph Smith was just a fantastic guesser, so theories have cropped up to suggest he must have had access to a handful of rare European maps that did include the placename Nehhem/Nehm, but even having such a map before him could not have told him about the River Laman, Shazer, the eastward route that can be taken at Nahom, and then the many miracles of Bountiful.

These evidences do not prove that Joseph saw an angel, had ancient gold plates that he translated, or was called of God as a prophet. They do not prove that Jesus Christ is the Messiah and visited people in the ancient Americas after His resurrection. But they do make it just a little harder to dismiss the Book of Mormon as something Joseph could fabricate from the common knowledge of his day, especially when the common knowledge of our day has held Lehi’s Trail as ridiculous. Perhaps it’s time to give the Book of Mormon a little more respect and read it more carefully.

Some questions remain, such as how much bigger and longer the river was in Lehi’s day than today. I am not sure if it now starts as far upstream as the oasis — need to check.

Update, Aug. 26, 2020: I understand now that the water flow begins upstream of the oasis and was visible there in 2019.  The above surface water today starts further down the wadi and isn’t currently visible at the oasis, but the water underground should be there and It flows perennially above ground into the Red Sea or into the “fountain of the Red Sea” as the Book of Mormon says.

Ponder the significance of the candidate for a campsite at the oasis in Wadi Tayyib al Ism. It’s at a location that is three days south of the beginning of the Red Sea and four days from a great candidate for Shazer if one travels in the general direction stated by Nephi. From that campsite, one can walk across the river (not a deep river, obviously) and walk into the only place in the valley that allows a southward departure and then reach a probably candidate for Shazer. These are places that shouldn’t even exist if Joseph were a fraud, and to have them plausibly in just the right locations reachable with directions given in the Book of Mormon is really spectacular. Was this just the result of great fortune from a young man making stuff up on the fly with virtually no knowledge of Arabia?

13 thoughts on “Warren Aston’s Search for Shazer: Another Breakthrough for the Arabian Peninsula Evidence for the Book of Mormon”