Science and religion are two independent witnesses of God’s Creation, according to a beautiful video interview of LDS scientist Dr. John Lewis, formerly of the University of Arizona and MIT, which is prominently provided at LDS.org. Lewis makes a very pro-science statement in his interview, though the emphasis is on expressing his faith and his witness of the divine Creation.

For those dealing with some of the tensions between science and religion, it’s helpful to understand that the Church does not take an official view on the details of the Creation process for the earth and does not require the earth to be young, nor does it deny the possibility of evolutionary forces being an important tool in the creation of life.

There have been conflicting statements over the years, and even some confusion about the nature and content of some statements. Some LDS publications, for example, have cited an open-minded 1910 statement as a “First Presidency Statement” (one example). In my recent post on day two of the 2017 FairMormon Conference, I mentioned that one presenter referred to a 1910 First Presidency Statement, but I wasn’t sure if that reference was accurate. The presenter, Ugo Perego, who had taken the quote from a secondary reference that described it as a “First Presidency Statement,” kindly followed up and found the source of the original text. It comes from an unsigned editorial in the 1910 Improvement Era (the official Church magazine of that day), vol. 13, p. 185. At this time, the editors listed were Joseph F. Smith, President of the Church and Edward H. Anderson. Brother Anderson was not a General Authority; at the time, based on his Wikipedia entry, I believe he was in the Weber Stake High Council, which is not quite the same. President Smith might have helped in writing it and most likely approved it, but that doesn’t make it an official First Presidency Statement. But I like it. 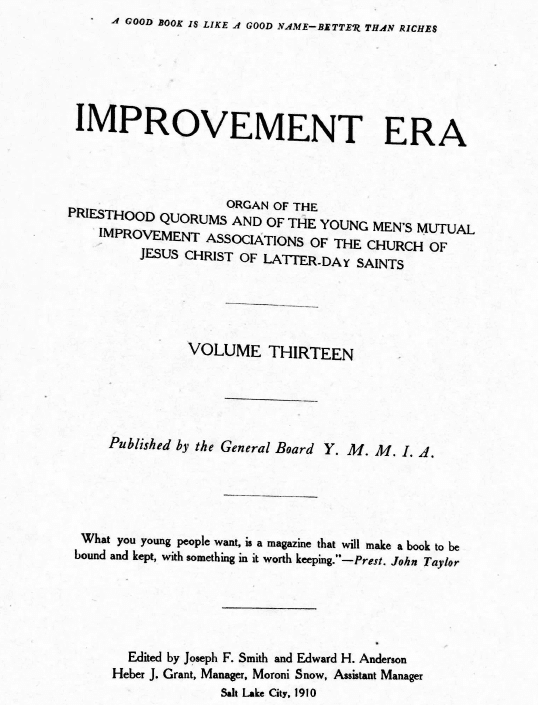 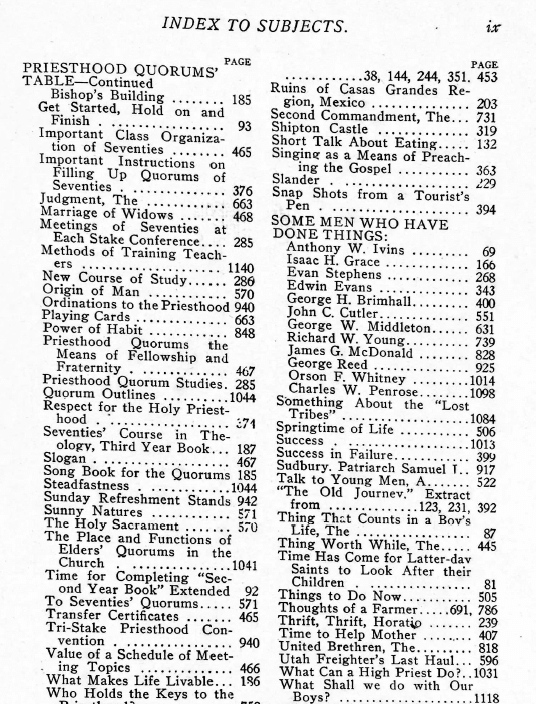 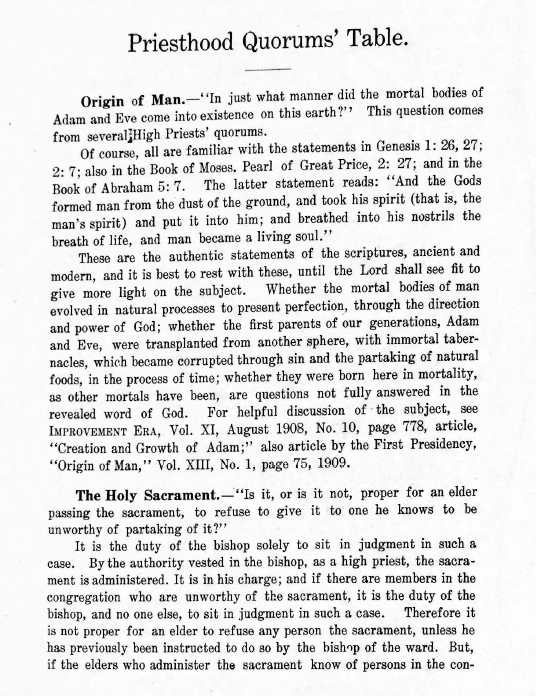 The text is available at FairMormon.org:

Origin of Man.– “In just what manner did the mortal bodies of Adam and Eve come into existence on this earth?” This question comes from several High Priests’ quorums.

Of course, all are familiar with the statements in Genesis 1: 26-27; 2: 7; also in the Book of Moses, Pearl of Great Price, 2: 27; and in the Book of Abraham 5: 7. The latter statement reads: “And the Gods formed man from the dust of the ground, and took his spirit (that is, the man’s spirit) and put it into him; and breathed into his nostrils the breath of life, and man became a living soul.”

These are the authentic statements of the scriptures, ancient and modern, and it is best to rest with these, until the Lord shall see fit to give more light on the subject. Whether the mortal bodies of man evolved in natural processes to present perfection, through the direction and power of God; whether the first parents of our generations, Adam and Eve, were transplanted from another sphere, with immortal tabernacles, which became corrupted through sin and the partaking of natural foods, in the process of time; whether they were born here in mortality, as other mortals have been, are questions not fully answered in the revealed word of God. For helpful discussion of the subject, see Improvement Era, Vol. XI, August 1908, No. 10, page 778, article, “Creation and Growth of Adam;” also article by the First Presidency, “Origin of Man,” Vol. XIII, No. 1, page 75, 1909.

This leaves open the possibility that evolution played a role in developing the human bodies of Adam and Eve and all of us. It’s a noteworthy moment in the history of LDS teachings relative to evolution. For more details, see David H. Bailey, “History of the LDS Church’s view on the age of the earth and evolution,” Jan. 1, 2017, at ScienceMeetsReligion.org. David H. Bailey is a scientist from Lawrence Berkeley Laboratory (recently retired) and the University of California, Davis. Also see his collection of 14 LDS-related pages on science and religion.

Disclosure: In fairness, I have to admit that I love science and my religion, and am invested in both.

5 thoughts on “Science and Mormonism: An Insight from LDS.org and an Update on the So-Called 1910 “First Presidency Statement””