“An Ancient Prejudice Has Been Removed!” and now women can can take off the chains that kept them captive. Liberated at last, now women, too, can enjoy the many benefits of, uh, smoking, proclaims the cigarette add in this classic and instructive Lucky Strike ad from 1929, preserved at TobaccoDocuments.org. 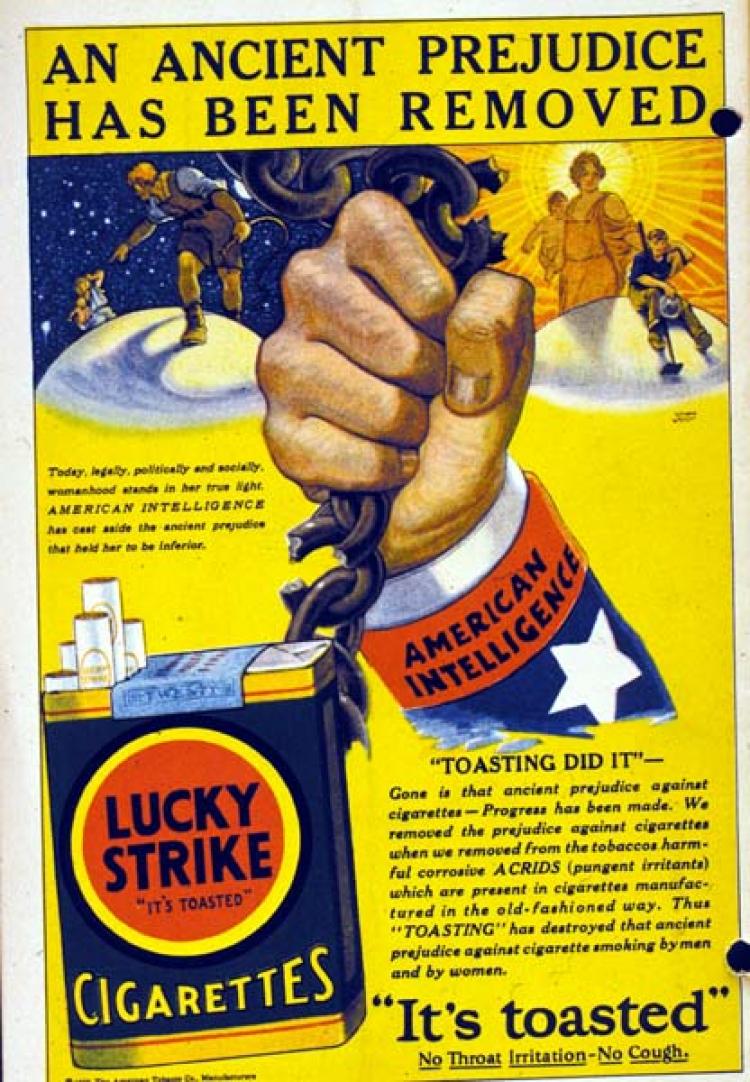 The full text of the ad:

A related version of the ad is displayed in a must-read BBC article by William Kremer, “James Buchanan Duke: Father of the Modern Cigarette,” (BBC News Magazine, Nov. 12, 2012), which I encountered in the course of looking at case studies of innovators and entrepreneurs. James Buchanan’s success story in business is a dark story of exploiting human weakness and spreading suffering to millions. This brings two passages of scripture to my mind. First, consider 2 Peter 2:18-19, where we learn that the liberty offered by the world and its glib marketers is not always liberty at all, but often servitude:

18 For when they speak great swelling words of vanity, they allure through the lusts of the flesh, through much wantonness, those that were clean escaped from them who live in error.

19 While they promise them liberty, they themselves are the servants of corruption: for of whom a man is overcome, of the same is he brought in bondage.

Then look at the 1833 revelation known as the “Word of Wisdom” recorded in Doctrine & Covenants 89, where we learn, prophetically, that tobacco is not for man and should be avoided as a key part of the Lord’s health guidance for mankind.

4 Behold, verily, thus saith the Lord unto you: In consequence of evils and designs which do and will exist in the hearts of conspiring men in the last days, I have warned you, and forewarn you, by giving unto you this word of wisdom by revelation–

Conspiring men in the last days just here apparently includes the clever marketers of tobacco, alcohol, and other harmful drugs. Liberation through a smoking addiction? But powerfully marketed, it has sold and continues to sell and destroy the lives of those who become “liberated.” I’m especially sensitive to this issue in China, where 1 out of 3 of the world’s cigarettes are smoked by Chinese men, with a little help from some excessively liberated Chinese women. The sound of hacking and snorting on the streets of China from smokers (mostly) is one of the few truly unpleasant things I have to deal with in this beautiful country. The fruits of smoking are ugly, stinky, debilitating and deadly, yet so much money continues to be spent to market this pestilence.

Here are a few excerpts from Kremer’s outstanding article on James Buchanan Duke (often called Buck Duke), the master entrepreneur whose innovations have brought death across the globe (with the help of many other soiled hands):

Jordan Goodman, the author of Tobacco in History, says that as a historian he is careful about pointing the finger at individuals, “but in the history of tobacco I feel much more confident saying that James Buchanan Duke – otherwise known as Buck Duke – was responsible for the 20th Century phenomenon known as the cigarette.”

Not only did Duke help create the modern cigarette, he also pioneered the marketing and distribution systems that have led to its success on every continent….

“The problem was he produced more cigarettes than he could sell,” says Goodman. “He had to work out how to capture this market.”

The answer was to be found in advertising and marketing. Duke sponsored races, gave his cigarettes out for free at beauty contests and placed ads in the new “glossies” – the first magazines. He also recognised that the inclusion of collectable cigarette cards was as important as getting the product right. In 1889 alone, he spent $800,000 on marketing (about $25m in today’s money).

We now know that cigarettes are far more addictive than cigars. The fact that the smoke is inhaled – which it is not traditional for cigars – also makes them more dangerous. But a correlation with lung cancer was not made until the 1930s and the causal link was not established until 1957 in the UK and 1964 in the US.

Cigarettes were in fact promoted as beneficial for health. They were listed in pharmaceutical encyclopaedias until 1906 and prescribed by doctors for coughs, colds and tuberculosis (a disease which the World Health Organization now links with tobacco).

There was an anti-cigarette movement in the early 1900s, but it was more concerned with morality than health. A rise in smoking among women and children fed into a wider concern about the moral decline of society. Cigarettes were prohibited in 16 different US states between 1890 and 1927.

Duke’s gaze shifted overseas. In 1902 he formed British American Tobacco with his transatlantic rival, Imperial Tobacco. The packaging and marketing would be tweaked for different consumers but the cigarettes would remain largely the same. More than a decade before the creation of the Model T Ford, Duke had a universal product.

“To him every cigarette was the same,” says Goodman. “All of the globalisation that we are now familiar with through McDonald’s and Starbucks – all of that was preceded by Duke and the cigarette.”

The global reach of cigarettes is still extending today. Although smoking in wealthy parts of the world is in decline, cigarette demand in developing countries is increasing by 3.4% a year, leading to an overall growth in cigarette consumption.

Kremer also reports that “Buck Duke is said to have marched up to a map of the world and planted a finger on China, saying: ‘This is where we’re going to build our empire!'” And so Big Tobacco has indeed. Tragic.

Turning again to women, a sidebar on the BBC article has a version of the Lucky Strike ad with this information:

The industry had a problem. You can’t advertise your way into convincing women to smoke – you have to change cultural expectations.

A woman smoking on a street corner was a signature of prostitution. A polite woman would never be caught smoking in public.

Edward Bernays – who was actually Sigmund Freud’s family member – was engaged by the American Tobacco Company to work out a public relations strategy to enable women to smoke.

So in the late 1920s, for example, they hired a bunch of young women to march down Fifth Avenue in the Easter Parade, holding their “torches of freedom” – their cigarettes. And this then became a symbol of women’s emancipation.

How liberated are your lungs now? Or are they, perhaps, as the Lucky Strike ad says, toasted?

The bogus liberty promised to women and men by clever marketers and conspiring men is not limited to tobacco products. I will leave it as an exercise for the reader to find and share instructive parallels.

9 thoughts on “Liberated? As in, Liberated Lungs?”