The following post is kindly provided by Jamie Huston, author of the blog Gently Hew Stone, where it was previously published. The points he makes are straightforward and valuable, and set the stage for some upcoming discussions of the important work of Brian Stubbs, particularly his new book, Changes in Languages from Nephi to Now (Blanding, UT: Four Corners Digital Design, 2016) and his 2016 FAIRMormon Conference presentation, “Changes in Languages from Nephi to Now.”

Internal Book of Mormon Evidence: The Lesson of Proto-Indo-European

As someone whose interests are primarily linguistic, and as someone
who loves and believes in the Book of Mormon, I find this intellectually
and spiritually disingenuous.  Frankly, ignoring the importance of
linguistic evidence in a study is unscientific.

Consider the study of the Indo-European language family, and its
prehistoric origins among groups of people who spoke a language that we
call Proto-Indo-European.

For those not familiar with this, here’s
an introduction: European languages often have obvious cognates with
each other.  For example, English and Spanish share many word roots that
point to common influences; the Spanish word “pensar” means “to think,”
and the English word “pensive” means “in a thoughtful mood.”

Going back through history, we see that many languages ranging from Western Europe even to India have such roots in common.  Here’s a
fairly simple “family tree” of the Indo-European languages from Rutgers
University, showing the relationships between tongues as
seemingly-unrelated as Italian and Polish, Welsh and Sanskrit; you can
see English evolving out of German.  Bet you didn’t know we had so many
cousins!

(Old English, the language of Beowulf, sounds more like
German than English to our ears.  Spanish cognates come from Latin’s
later influence on English, mostly starting with the French invasion of
England in 1066.  These two heavy influences are one reason why English
has so many synonyms, such as the Germanic “handbook” and the Latinate
“manual.”)

Analyzing enough languages far enough back in history, we find some
very diverse early languages with common material.  This suggests that
there were related tribes of early peoples who spoke a parent language
that gave us many of the modern world’s languages.

Here’s what this has to do with Book of Mormon evidence:
it’s by linguistic analysis that we learn about Proto-Indo-Europeans.
For instance, we can tell that they were familiar with cold climates,
because multiple ancient languages in this family have common root words
that mean “snow.”

But there’s very little archaeological evidence for their existence.
In fact, the earliest evidence for Proto-Indo-Europeans, and the bulk
of what we know today, comes from the language material they left us
in later languages.  It’s only been since the 1950’s that the scant, new
physical evidence from proposed sites for these peoples has been able
to bear on the study at all.

We don’t have a lot of artifacts or positive identification for sites
where Proto-Indo-Europeans lived.  They didn’t even have writing, so
our knowledge of their language is only based on reconstruction from
second hand material.  Yet their existence is universally acknowledged,
and has been for centuries, and that consensus is on the strength of
linguistic evidence.

Someone wanting to discount the veracity of the Book of Mormon
because most of what we know about its origin is textual rather than
archaeological should reconsider their critical criteria.

Here is an updated version of the language tree from Jack Lynch of Rutgers that Jamie links to (click to enlarge): 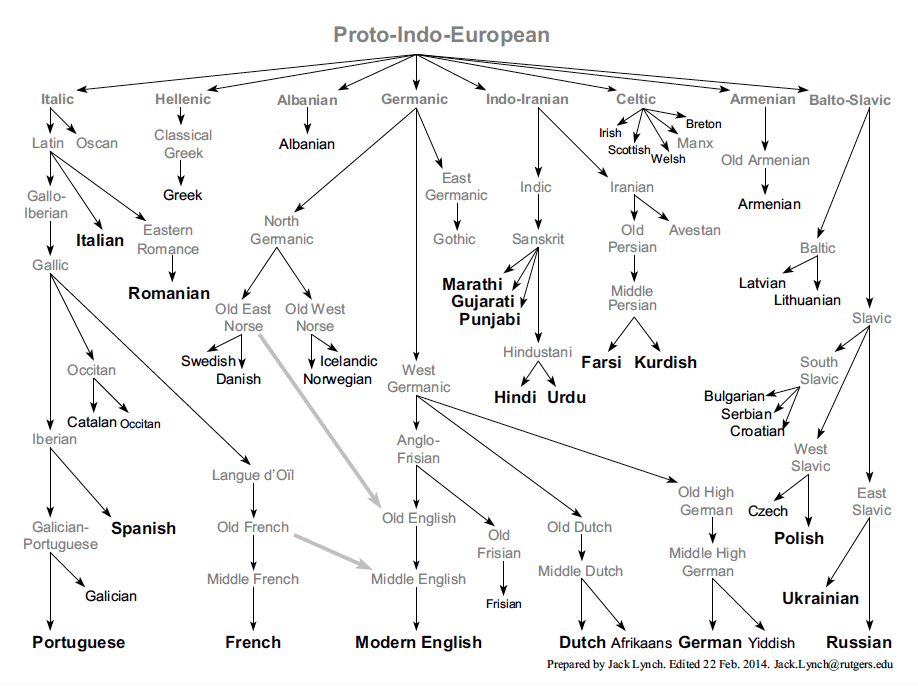 18 thoughts on “Internal Book of Mormon Evidence: The Lesson of Proto-Indo-European (Guest Post from Jamie Huston of Gently Hew Stone)”