In a small but highly valuable and colorful book on the Book of Abraham, John Gee’s A Guide to the Joseph Smith Papyri (Provo, Utah: Foundation for Ancient Research and Mormon Studies,
2000), Gee argues that the Kirtland Egyptian Papers (KEP), whatever they were, cannot be viewed as a window into Joseph Smith’s production of his translation of the Book of Abraham. With the publication of the KEP as part of volume 4 of the Joseph Smith Papers, we now have a better chance to examine the documents and evaluate Gee’s arguments.

There are three documents from the Kirtland Egyptian Papers that have a portion of the English translation (ranging from Abraham 1:4 to 2:18), each with a few Egyptian symbols or portions of symbols to the left. Some have argued that this shows Joseph’s translation process at work, revealing his foolish belief that mystic Egyptian writing contained intricate details magically condensed into a few strokes. First, it’s hard for me to believe that Joseph could have believed such a thing were possible, especially when the “Reformed Egyptian” script on at least much of the gold plates gave no hint of such miraculously compact text. Had it been that way, a single gold leaf might have held the entire Book of Mormon or more, but it was a fairly thick book based on witness accounts, and while 2/3 of it was sealed, that still gives a plausible amount of surface area for engraving the text of the Book of Mormon in small Hebrew characters, and certainly enough for a slightly more compact script. See my LDSFAQ answer to the question, “How could the whole Book of Mormon fit on the small number of unsealed gold plates?” But ignoring for now the clear disconnect between Joseph’s prior translation work with Reformed Egyptian and the KEP translation theory, let’s consider Gee’s arguments and the KEP manuscripts. In Chapter 3 of his book, pages 21-23, he writes:

Advocates of the Kirtland Egyptian Papers theory also assume that
Joseph Smith first compiled a grammar from which he then produced the
translation. But when a text in an unknown language is initially
translated, a decipherer usually cracks the language without the use of
grammars. Grammarians then go through the translation, establish the
grammatical usage, and compile a grammar. Later, individuals learn the
grammar and then produce translations. As a decipherer and one who had
never formally studied any grammar at the time he produced the
translation, Joseph Smith would have done the translation first.

He shows six examples of color images from the KEP that are said to demonstrate the use of different inks, characters that don’t line up with the text they are supposedly generating, and characters that overrun the vertical line separating the characters from the English text. The images unfortunately are somewhat small and not in high resolution, and the online version of the book only has the text, not images.

I should also note that Gee and others elsewhere have also observed that other clues such as scribal errors in the English translation further suggest that in these manuscripts, an already existing English translation was copied down, not generated. Thanks to the Joseph Smith Papers, we can now look at the KEP documents up close and better evaluate such arguments ourselves. Below are some of the features that I suggest should be considered.

Turning to the Table of Contents for Volume 4 of the Joseph Smith Papers, we can see that there are links to the three key documents in question. These are:

The links will take you to the online, high-resolution images.

One more clue to consider up front is that these documents clearly cover only a small portion of the Book of Abraham, not the entire text. The most coverage is found in Document C which has English text from Abraham 1:1 to 2:18, representing less than 2 of the 5 chapters of the text. But let’s now look at the images. 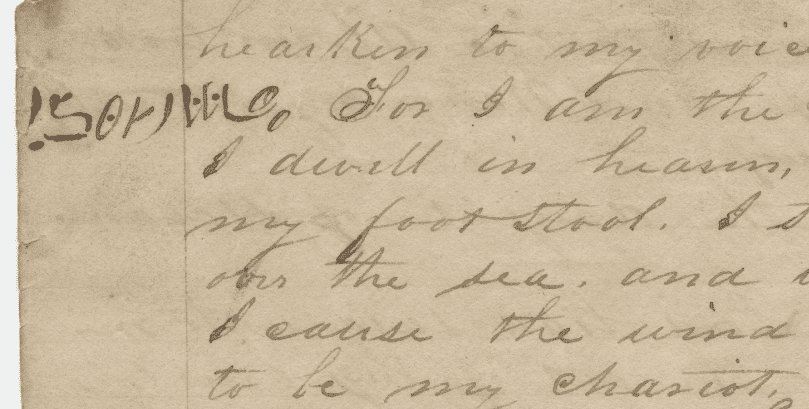 An example not mentioned by Gee is readily noted on page 1 of Document A, where Egyptian again overruns the vertical dividing line, as if a dividing line were drawn for the English text on the page first, and then Egyptian was filled in, not always with enough space. Here the word “utterly” to the right appears slightly indented, but no more than the text two lines later. Indeed, most of the lines on that sheet are indented about the same amount as “utterly.” 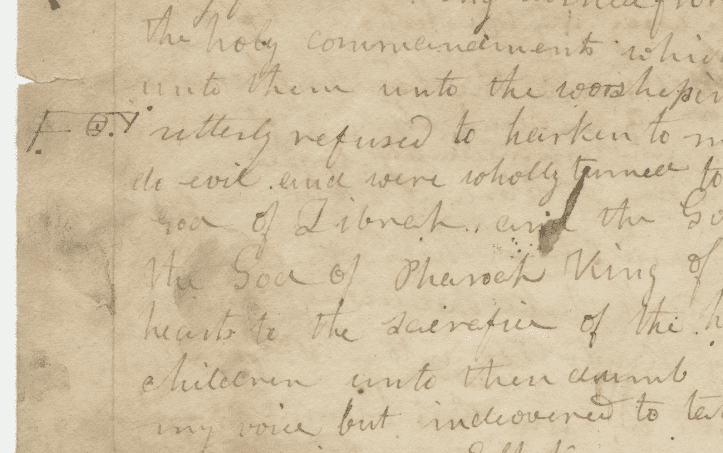 The top of this sheet, shown below, shows some of the corrections made in copying this text. Interestingly, both Documents A and B have a correction made in Abraham 1:4, with “I sought for the appointment whereunto the priesthood” changed to “I sought for mine appointment unto the priesthood,” the wording used in Document C. Document C has the broadest expanse of text and thus if one of these were the original source for the Book of Abraham, Document C might be the most logical candidate.

Another example from Gee comes from page 2 of Document A, which is Sample 4 in Gee.  This is cited as an example of different ink being used in the Egyptian than in the English, of text that runs over the margin line, and of text that does not line up with the English. Here I cannot be sure that the ink is different, for it may simply be that it has been more heavily applied in the heavy drawing on the left. Anyone up for some non-destructive chemical analysis? I’d love to have something more specific on the inks used.  As for going over the margin, the degree of overrun is minor. On this page, though, two of the three Egyptian characters slightly overrun the margin line. If the margin line were drawn after the first couple of characters had been put down, one might expect it to be drawn to the right of the characters (ditto for page 1, discussed above). In general, though, it does seem reasonable that the margin line was drawn following the addition of the English text, and then came the Egyptian. There is misalignment with the beginning of Abraham 1:20 (“Behold, Potiphar’s Hill was in …”), but the Egyptian is only slightly elevated, so it’s not serious misalignment. 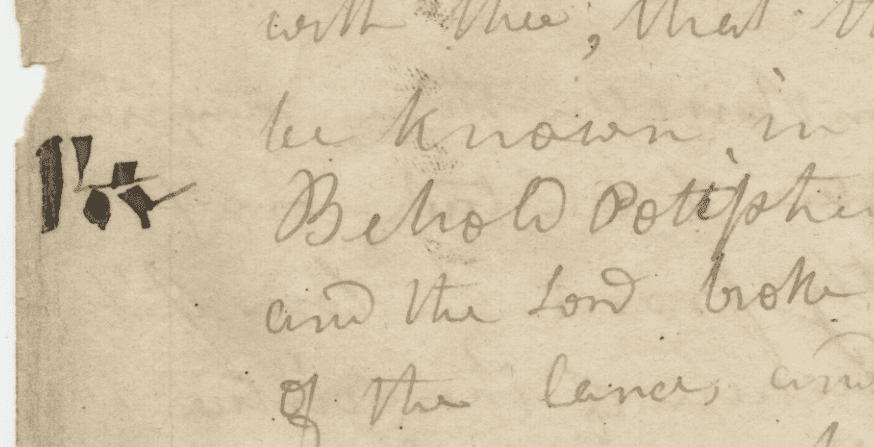 The next example from page 3 of Document A shows slight overlap of Egyptian with the margin. But it also shows that a single ink (so I presume) used for the Egyptian can create the appearance of darker ink by applying the ink more heavily, as I believe has happened here. This is not one of the examples shown by Gee, though.

The image below is taken from page 5 of Document B, corresponding to Sample 2 of Gee, which is said to show different ink and margin overrun in the Egyptian. The overrun is clear, but I’m not sure about the ink. 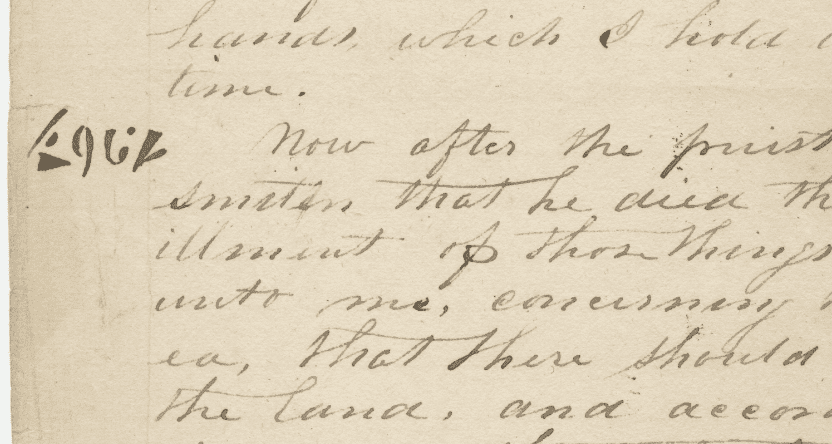 Next is an image from page 3 of Document C, corresponding to Sample 3 of Gee, said to show the use of different ink and also said to demonstrate Egyptian that does not line up with the English text. Again, I’m not sure on the ink, though it may be different. As for the alignment, I tend to agree. If the Egyptian had been written first followed by the production of an English translation, the indented beginning of a verse would presumably be directly to the right of the Egyptian. It makes sense that the Egyptian was added later in Document C, which is clearly the best candidate (however inadequate) of the three documents for the source of the Book of Abraham for those advocating the KEP theory for how the translation might have been done.

The following image is from page 4 of Document C, corresponding to Sample 6 of Gee, said to show different ink and misalignment of Egyptian with the English. The ink does appear different but I’m not sure The alignment is much worse than the same text from page 2 of Document A discussed above, making this a clear example of the misalignment problem mentioned by Gee.

Here is an example of a possible change in ink or at least a change in scribe during the copying of text, from page 8 of Document C. 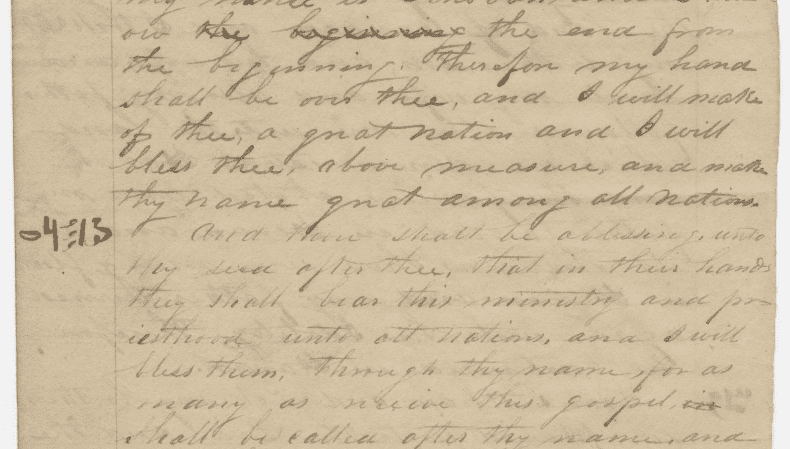 Here is an example of the scribal errors made and corrected in the copying process from page 10 of Document C.

Scribal errors are also visible on page 9 of Document C.

Here is another example of poorly aligned text from page one of Document A.

Document A at page 4 ends with a strange duplicate section where Abraham 2:3 to 2:5 is repeated, and the text begins going all the way to the left side of the page. 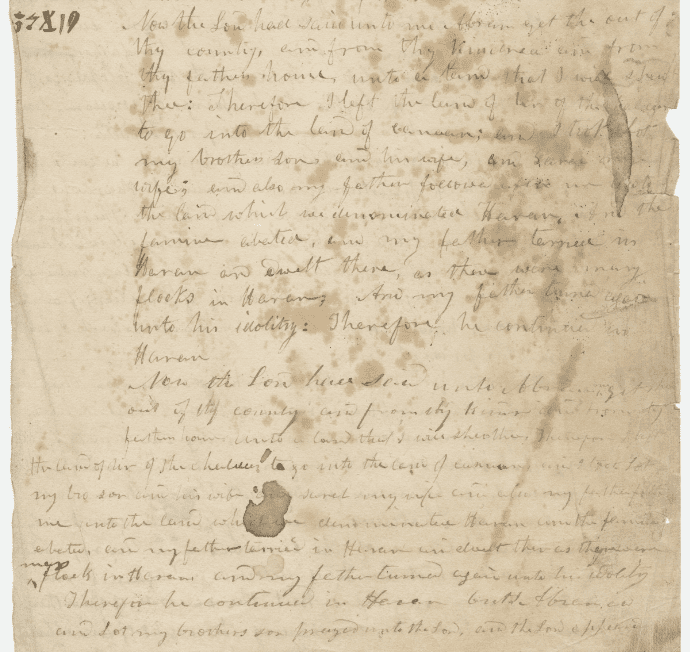 Document B at page 6 suddenly ends with an “untranslated” character.

In
general, I find Gee’s arguments are plausible, though it’s possible the
same ink was used throughout with different pens or scribes and/or with
different techniques such that the Egyptian had higher ink density
rather than different compositions. I would love to see some physical or
chemical testing done — there are nondestructive texts that can help
identify things like the atomic species present. But considering the physical details of these documents, their incompleteness, and their lack of relationship to anything that even an unschooled farm boy could mistake as a translation (in light of his work, whether real or fictitious, with translation from a large set of plates with “reformed Egyptian” text), it seems implausible that these are giving us a window into the actual work of translation of the Book of Abraham. Yes, the characters could have been catalysts to produce the text, but we are not looking at a work in progress here, but more likely the copying of perhaps just a part of an already completed text.

So why the Egyptian characters on these documents at all? Were they there for decoration? Was someone trying to find some mystic relationship between the Sensen text and the Book of Abraham text that came from a missing part of the same scroll? Was W.W. Phelps looking for clues to the pure Adamic language? Much to speculate on, but I don’t think it’s fair to describe these documents as some kind of window into how Joseph Smith created the English text of the Book of Abraham.

Note: Also see my later post of April 15, “The Smoking Gun for Joseph’s Translation of the Book of Abraham, or Copied Manuscripts from an Existing Translation?”

This post is part of a recent series on the Book of Abraham, inspired
by a frustrating presentation from the Maxwell Institute. Here are the
related posts:

22 thoughts on “Do the Kirtland Egyptian Papers Prove the Book of Abraham Was Translated from a Handful of Characters? See for Yourself!”