After evaluating evidence for the plausibility and authenticity of the mysterious golden plates, I must report that the Book of Mormon gets a “D” for being in an interesting bind, or shall I say binder? I cite the “D” not as a grade, but as one more subtle bit of evidence that merits attention. The “D” I refer to is the D-shape of the rings holding together the golden plates, a minor detail mentioned by only a few of the roughly twenty witnesses of the gold plates. Warren P. Aston has provided information on this topic in the article, “The Rings That Bound the Gold Plates Together” in the latest issue of Insights, a newsletter of FARMS and the Neal A. Maxwell Institute for Religious Scholarship at BYU (Insights Update No. 178, Vol. 26, 2006). It’s not yet available online, so I’ll share some details from the printed version.

There appear to be three references to the D-shape of the rings from eye-witnesses. In 1831, William E. McLellin said that Hyrum had told him that “The plates were . . . connected with rings in the shape of the letter D, which facilitated the opening and shutting of the book.” (Reported in the Huron Reflector of Norwalk, Ohio, Oct. 31, 1831.) John Whitmer in an 1878 interview stated that the plates were held together with “three rings, each one in the shape of a D with the straight line towards the center.” (Interview with P. Wilhelm Poulson, Deseret News, Aug. 6, 1878.) A third possible confirmation of this comes through David Whitmer, who in 1877, while 72 years old, discussed a remarkable vision of his mother, Mary Musselman Whitmer, who said a she had also seen the plates shown to her by an apparently angelic visitor. In discussing this, he said that she observed that the plates were “fastened with rings thus” followed by a drawing of a D-shaped ring. (David Whitmer interview by Edward Stevenson, Dec. 22-23, 1877, Family and Church History Department Archives, The Church of Jesus Christ of Latter-day Saints.) Since David had seen and handled the plates, if his mother’s description had been wrong, he presumably would have corrected it.

These comments have not been widely noticed in the LDS community, and some have naturally assumed that “rings” were circular (although others have depicted them as being essentially rectangular with a rounded upper end, as shown in the replica displayed on a BBC page and in art by Arnold Friberg and others. However, a ring with a straight side is more efficient for holding stacked plated or sheets than a purely circular ring. In retrospect, it makes sense that experienced users of metal plates would use an efficient binder system. Warren Aston reports that the D-shaped ring “offers a full 50 percent more storage capacity than a circular ring” and “20 to 25% percent more storage capacity than a slanted semicircular shape,” though details of the calculations are not given (but it sounds reasonable).

The article got really interesting to me when it mentioned patents – my field of focus professionally (I augmented my approach to R&D by becoming a US patent agent ten years ago, and now work as Corporate Patent Strategist in a fascinating large company where I have loads of fun working with intellectual property, especially as a tool for dealing with disruptive innovations, an area of recent focus). Here is how the Insights article invokes patents:

The same principle [efficient ring shape for storage efficiency] governs the loose-leaf binders used today. Their history is instructive. The first loose-leaf binder patent was not filed until 1854, with the first two-ring binders advertised for sale in 1899. The two improvements to the basic design followed. Within a few decades the use of three rings rather than two proved to be a more stable design and became standard. These early designs, however, used circular or oval-shaped rings. Only in the last few decades has the improved capacity of D-shaped rings been recognized and made available for loose-leaf binders.

Joseph Smith displayed plates that were securely bound by three rings (not two or four) constructed in what we now know is the most efficient shape. He could not have known either of these facts in 1829 from the materials in his environment of from people who may have had greater familiarity with libraries or materials storage. Nor could he have been informed by the finds of other ancient records, as none were then known to be bound by rings. Perhaps it is not coincidence that the only other ancient record bound by rings so far known also has D-shaped rings and dates to about 600 B.C.

The D-shape of the rings is a minor and subtle detail that may have been overlooked by most people. After all, it was the gold plates themselves that were of real interest. But like so many other details in and involving the Book of Mormon, there is a whisper of authenticity in this matter. Like the very existence of ancient writing on gold plates, there was nothing in Joseph’s environment or background that would have guided him or alleged co-conspirators in fabricating this detail. In fact, there is no evidence that Joseph ever mentioned the shape of the rings. This came from eye-witnesses – eye-witnesses, mind you, who remained true to their testimony of the plates throughout their lives. D-shaped rings are known to be more efficient than circular rings, but were not a common part of anyone’s experience in 1830, as far as we can tell. The shape of the rings and their observation by eye-witnesses can best be explained by the hypothesis that there were actual gold plates made by actual experts in plate-based writing systems that were seen by actual witnesses.

I do have a couple of minor corrections and additions to the information given by Brother Aston, largely based on information obtained from the US Patent and Trademark Office (USPTO) from their online patent searching service. According to The Early Office Museum’s page on Small Antique Files and Filing Devices, the earliest binder patent is US Patent No. 23,506, awarded to Henry T. Sisson in 1854. Brother Aston has corresponded with the Early Office Museum and this is where he obtained the 1854 date. However, the patent was actually issued April 5, 1859, but the handwritten date on the front page of the patent has the “9” in 1859 looking like a “4”. But as one can see on the second page in the USPTO’s entry for this patent, it’s 1859 (to view the images of the patents, you may need to do a quick and painless installation of the small and efficient AlternaTiff image viewer). First, Sisson actually does describe a binder that has two “or more” rings, and his 1859 patent (not 1854) shows an example with three rings: 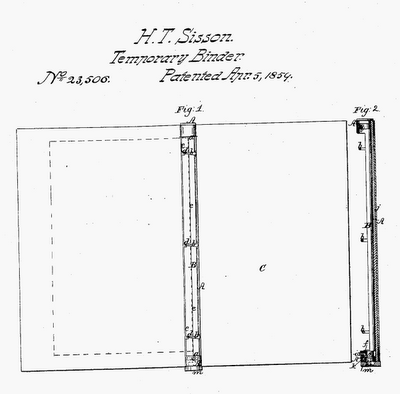 However, early marketed versions of ring binders do show two rings and perhaps that was the dominant or only commercialized form, as suggested to Warren Aston by M. Frankena. See, for example, the ad from the late 1800s for Russell’s Common Sense Binder, which is based on US Patent No. 192,791, issued July 3, 1877 to W.H. Russell. While the figures show two rings, his text refers to “two or more fastening points,” so three rings were also contemplated.

An 1899 advertisement for a two-ring binder with circular rings is shown at OfficeMuseum.org. This was based on US Patent No. 267,890, “Letter File,” issued to M. Herzberg, November 21, 1882. An image from this patent is shown below: 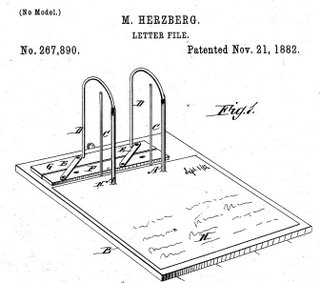 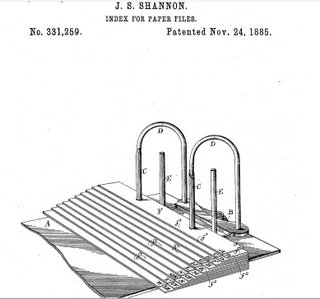 A wide variety of early binder systems can be found by looking through US patents for the following classification codes: 402/17 and 402/25, though there are other classifications one could consider.

The earliest binder-related US patent that I have found, one of the first three patents in the general classification code of 402, is US Pat. No. 1,673, “Movable Binder” (also titled “Construction of Screw Nuts to Be Applied to Files for Filing Papers, Accounts, Etc.”) issued to William Mann, July 3, 1840. Still 10 years after the Book of Mormon, this early binder patent shows a relatively primitive system with binding in two places, not three (the text is specific: it’s “two,” not “two or more”), as shown in the figure below: 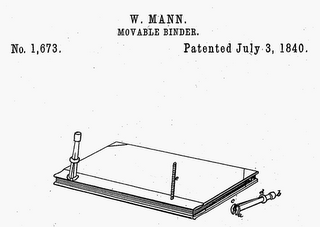 A variation of this theme occurred the following year in US Patent No. 2,105, issued to Isaac Deterree, May 22, 1841. This patent mentioned “two or more” screws for binding paper, but still unlike a ring binder. Prior to Sisson’s 1859 patent, J. Shaw also patented a couple versions of portfolio binders that had rings, but they did not to pass through the sheets, but were anchors for thread that was passed through the sheets. See US Patent Nos. 15,150, issued June 17, 1856, and 6,860, issued Dec. 24, 1850.

H.T. Sisson also had a slightly earlier patent on a binder system in which cords passed through sheets at three places. See US Patent No. 18,994, “Temporary Binder,” issued Dec. 29, 1857.

D-ring innovations continue in our day. Consider, for example, US Patent No. 5,332,327, “D Ring Binder,” issued to Steve Gillum, July 26, 1994. It describes a “ring binder having D-shaped rings wherein the rings, when opened, position a generally straight leg of the D-shape in a vertical orientation with respect to a horizontal bottom cover panel of the binder.” An image is shown below: 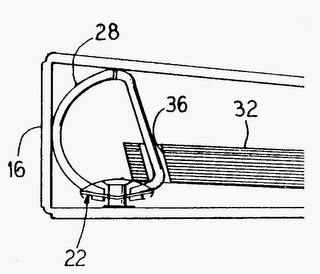 Circular or oval rings persist to this day, and are fine for many applications, especially when efficiency is not critical.

Given all this, I would say that three-ring binders were known by 1859 and that binder systems somewhat similar to D-shaped rings were known in the late nineteenth century, but again, all that was long after Joseph Smith’s day. It’s a minor point, and only minor evidence in favor of plausibility (the basic testimonies of the many witnesses being much more important), but it’s part of the body of evidence that is difficult to account for if Joseph just made up the story of the gold plates.

As a final tangential observation, the inventor of the three-ring binder, Henry T. Sisson, has been honored with a bronze statue in the Union Cemetery in Little Compton Common in the town of Little Compton, Newport County, Rhode Island. According to The Political Graveyard, Sisson was a Rhode Island Colonel in the Union Army during the Civil War; Lieutenant Governor of Rhode Island, 1875-77. You can also view the Henry Tillinghast Sisson Monument online. It was made in 1917. You may also wish to see a scrapbook on RootsWeb.com about H.T. Sisson.

Interestingly, a 2005 Christian Science Monitor quiz mistakenly places his status in Boston Commons rather than Rhode Island’s Little Compton Common, and also repeats the incorrect 1854 date for his patent.

50 thoughts on “A “D” for Plausibility of the Gold Plates: The Book of Mormon in an Interesting Bind”