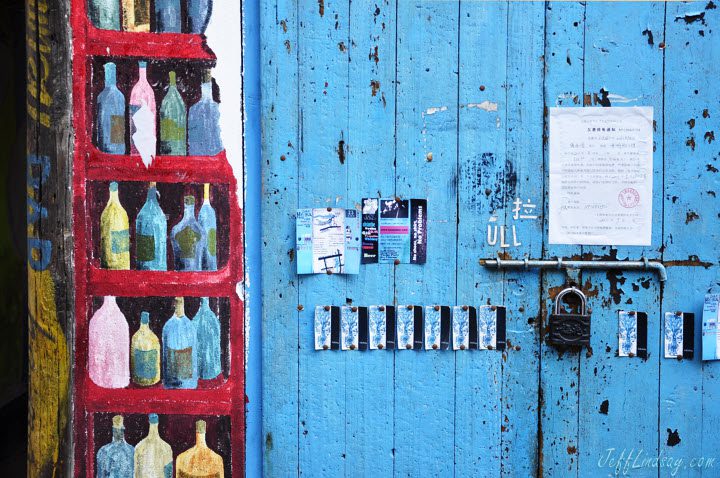 Worse things could happen than the closing of this little bar in the village of Zhu Jia Zhao, an ancient water town with beautiful canals on the outskirts of Shanghai, halfway to Suzhou. Alcohol is not consumed as heavily here as it is Wisconsin, where I spent many years before coming here to to the Appleton of the East (OK, more like the Madison of the East, but without all the angry demonstrators, and, oh, about 100 times as populated). Even though they seem to generally be more temperate, the Chinese people would be even better off if they dropped alcohol completely, IMHO. Healthier and happier. That’s just my Mormon 2 cents worth (or 0.13 RMB).

The official notice on the door is from the local power company declaring that their power has been shut off for failure to pay their bills. It looks like a competitor bar put some of their ads on the door.

Maybe I’ll post some of the photos of this beautiful canal city, but this old door was one of my favorites from my photo shoot there, courtesy of two wonderful local Chinese friends with a car who took my wife and I on a day of adventure that included this ancient water town. We have such great friends out here!