During our recent trip to Mexico, we spent a few days in the city of Oaxaca and then went to Huatulco on the west coast of Oaxaca State. Huatulco in the Nahuatl language supposedly means “place where timber is adored” and is said to refer to the worship of a wooden cross by the native inhabitants of Huatulco (Zapotecs) before the Spaniards arrived. The English pirate Thomas Cavendish attacked the port in 1583 and tried to destroy the native cross that stood on the beach, but the cross was miraculously preserved. Spanish authorities later distributed portions of the sacred wooden cross to many other regions. One such place is the city of Oaxaca. A wooden cross taken from the holy cross of Huatulco is present in a side room at the Cathedral of Oaxaca, shown below in a photograph from our recent trip. 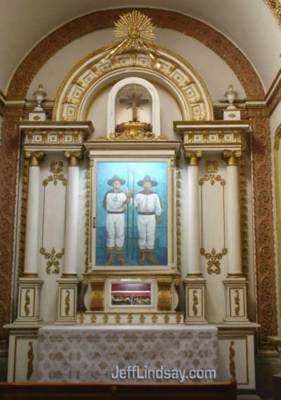 Side room in the Cathedral of Oaxaca with a wooden cross made from a portion of the original ancient wooden cross worshipped by Native Americans at Huatulco, Mexico.

As with legends of Quetzlcoatl, it may be hard to determine what parts of the legend truly reflect precolumbian beliefs and practices, but the legend of the wooden cross of Huatulco may be a story worth knowing about. Perhaps there is more than a sliver of truth to it.

3 thoughts on “Ancient Worship of the Cross in Mexico”