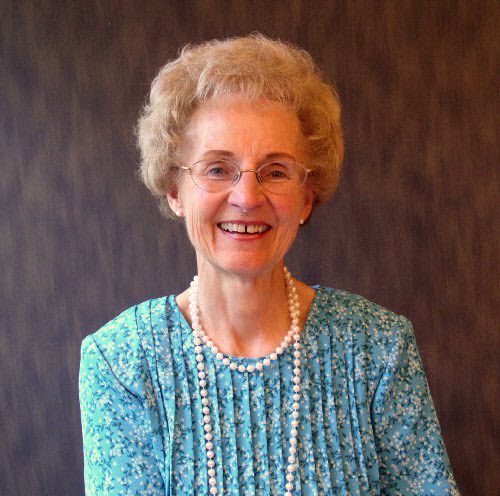 Last Monday I was in Utah for the funeral of one of the most remarkable women I know, my mother-in-law, Doreen Larson. I’ve never been able to understand mother-in-law jokes, but I bet she could appreciate son-in-law jokes. One of the things that I like about her and her now-deceased husband was the loving concern about the person her daughter, Kendra, was hanging out with. Was that strange tall kid trustworthy and good enough for her daughter?

Doreen’s values were so different from the rest of the world. Case in point: As a bright student at the University of Washington in her junior or senior year, she was one of two finalists for an outstanding scholarship. Coming from a family without much money, the scholarship would have meant a lot. She wasn’t getting any money from her family for college but was completely on her own, working to put herself through college. Now she had a shot at a significant scholarship that would have made life easier. In fact, in her interview as a finalist, the committee essentially told her that she was going to be their pick. How exciting! As she left the interview, she met a man waiting out in the hall and started chatting (she’s such a friendly and loving person). She learned that he was the other candidate scheduled for an interview with the committee right after her slot. She learned that he was married and had kids, and learned that he really could use the money.

You know what she did? I just love this about her, and didn’t know the story until the funeral. My wife didn’t even know until the night before when Doreen’s brother shared this story that Doreen kept pretty much to herself. She decided that this other man, a stranger with a family, needed the money more than she did. She made her decision on the spot, excused herself from the conversation with the other candidate, and went back to the committee she had just met with to decline the scholarship. She declined it–to help a stranger, a man who probably never learned how magnanimous and selfless this woman was. We didn’t know the story until after her death, but we knew her character and know that this is exactly the kind of thing she could and would do for others.

After raising 7 wonderful children, she and her husband chose to go on a mission to serve others in Nepal. This was not an easy place to live. The poverty and challenges of the people could be overwhelming. When surrounded by numerous people begging for money from Americans, it’s easy to grow callous and just ignore everybody. But she prepared some money and food every day to be able to help, seeking to follow the Spirit to do the most good with her giving. She had some powerful spiritual experiences in finding people she could help, in addition to the primary service work they were doing in an institution. Always looking for ways to help others, even under trying circumstances–that was Doreen Larson. Quietly, privately, without fanfare or press releases, she was serving people throughout her life and lifting others in so many ways.

She was one of the healthiest and most active people I know. How surprising that she would be diagnosed with cancer and then pass away just a few days later. Mercifully, she had time to say goodbye.

As an example of her vigor, when my wife and I and a son went to Barcelona, Spain a couple years ago, we were delighted that she was able to go with us. (Again, I don’t get mother-in-law jokes. It was always a pleasure and honor to have her around.) Though well into her 70s, she had no trouble keeping pace with us as we trekked through the city, or maybe we were trying to keep pace with her. Vigorous, high energy, and a just a lot of fun.

Her love and charity weren’t always apparent, though. Yes, I’m referring to her penchant for crushing–with a smile–all who stood in her way when playing card games. Canasta, Uno, Rack-O, cribbage, you name it–she was tough and merciless, usually winning with glee. I guess you can call it tough love. She was one of the toughest when holding cards. How I regret that I won’t be able to avenge myself and attempt a rare victory until after the Resurrection. Unfortunately, by then she will have honed her skills to perfection, but I still look forward to the fun of sitting at a table with her.

Such a delightful and powerful woman, an incredible mother, and a humble but bold servant of Jesus Christ who changed many parts of the world for good. How grateful I am that my children have such people as part of their heritage.

Happy Mother’s Day, Doreen, from all of us!

Like my own parents, Doreen and her husband served as missionaries and met on their missions. When she met Elder Larson, an elder sharing her last name of Larson, she kept a watch on him because she was worried that the Larson name would be jeopardized by any bad behavior. She initially thought he was a tad arrogant but would learn he was just shy. She worked in the mission home in the Central States Mission in Missouri (to her chagrin–she wanted to be out proselyting, but her advanced office and organizational skills were probably indispensable) and Floyd would soon be the Assistant to the President, frequenting the mission home also. She came to realize what a remarkable man he was. Years later her husband would scandalize her in jest by claiming that they used to hold hands under the table at the mission home. “Floyd!!” I don’t think they did, but I have no problem with good missionaries recognizing something very good in others on their mission, while staying dedicated to their work and abiding by the rules as I am sure they did. But what a sweet romance that relationship would become, one that was not erased by death.

How strange it is today to not be able to pick up the phone and wish her a happy Mother’s Day. I hope she gets this message somehow. How we miss her, but how proud we are of who she is!

5 thoughts on “Marveling at the Life of Doreen Larson, My Late Mother-in-Law”