During the Communist era in Bulgaria, the annual May Day parade was a major spectacle that drew huge crowds to the streets of Sofia. The crowds would come to 9th September Square and see their Communist Party leaders lined up on the balcony of the massive mausoleum for Georgi Dimitrov, the first Communist leader of Bulgaria who led the nation from 1946 to 1949. The leaders would salute the soldiers and others marching in the parade and wave to the masses. But in 1986, the assembled people of Sophia were puzzled. Where did the leaders go? The balcony was empty. This only happened once during the 43 years of Communist rule. What caused their strange disappearance on May 1, 1986?

The mystery was due to two things: first, very effective government censorship and second, the nuclear reactor accident in Chernobyl, Ukraine, less than 700 miles away. The Chernobyl disaster raised legitimate concerns that some of the released radioactive material would be passing over Bulgaria and contaminating the air or rainfall. The Party officials, of course, simply skipped the May Day parade and were were safely sequestered indoors as the people were outside celebrating without being bothered by news of the Soviet Union’s embarrassing disaster. To me, it helps illustrate some of the dangers and perverseness of censorship. Government censorship, in my opinion, is not really about helping or protecting the people, but protecting the power of those in charge and manipulating their subjects.

This episode in Bulgarian history was related to me by an outstanding tour guide, Nikola, during a highlight of my recent visit to Bulgaria during the “Communist Tour” provided by the 365Association (related to FreeSofiaTour.com and bookable via that website, though the  Communist Tour is not free but worth ever lev of its very low price). Our Bulgarian tour guide, also a musician who has performed across Europe, co-founded this tour to fill a large unmet need in Bulgaria, where surprisingly little information is available to students and tourists about the controversial history of Bulgarian Communism. He has done primary research on the way Communism affected people’s lives and how it operated. Over the course of about 3 hours in Sofia, he took us and about 20 other people to numerous sites where he shared stories to give us a feel for how Communism rose and fell, and what it meant for those who liked it and for those who hated it. As America now struggles with the tension between free speech and government’s growing desire to “protect” the masses from “disinformation,” some of Bulgaria’s lessons (as well as lessons from the Soviet Union, China, Venezuela, Cuba, etc.) might be worth considering. One of those lessons is that when government assumes the right to control information, it’s not just freedom of speech that is at risk, but also religious liberty. Bulgaria discovered this during the Communist era. After centuries of  Muslims and Christians getting along in many communities in Bulgaria

When governments become so powerful and so disrespectful of the citizens they supposedly represent that they dare to censor the information they can receive or share, what follows can include preventing the spread of religious information they don’t like, or even engaging in outright harassment of religious groups they don’t like. Freedom of speech needs to be a concern for those who care about religious freedom.  In my view, it’s time for Americans to speak out against government efforts to increase censorship. 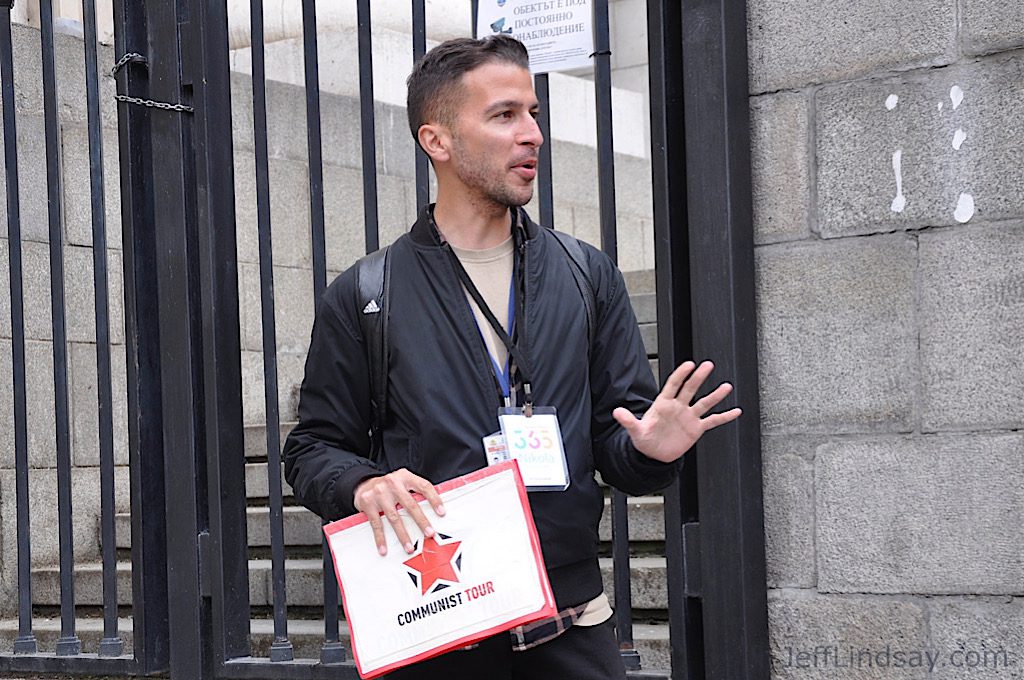 We loved Nikola’s passion for history and the extensive research he has done, allowing him to answer difficult questions with solid information and even more stories. He has material that could make a book or documentary. Some of the information is troubling, such as discovering the sites of many dozens of locations where citizens were detained for questioning or worse. In the photo below, Nikola is showing us a map of these sites in Bulgaria as he stands in front of a door leading to an underground complex where many citizens were detained and often beaten. In the photo following that, you can see the memorial we saw toward the end of the tour that lists the names of over 20,000 victims of Communism in Bulgaria. Many lost their lives, sometimes with great cruelty, when the totalitarians of Bulgaria suspected them of opposing their rule. No trials were needed, no due process was required, to snatch people in the middle of the night or anytime for questioning and cruelty to force a confession or carry out lengthy punishment or execution. Possibly modeled after the Vietnam War Memorial in the US, the Bulgarian memorial is meant to remind us of ugly events, measured in human lives and human pain, that must not be forgotten. 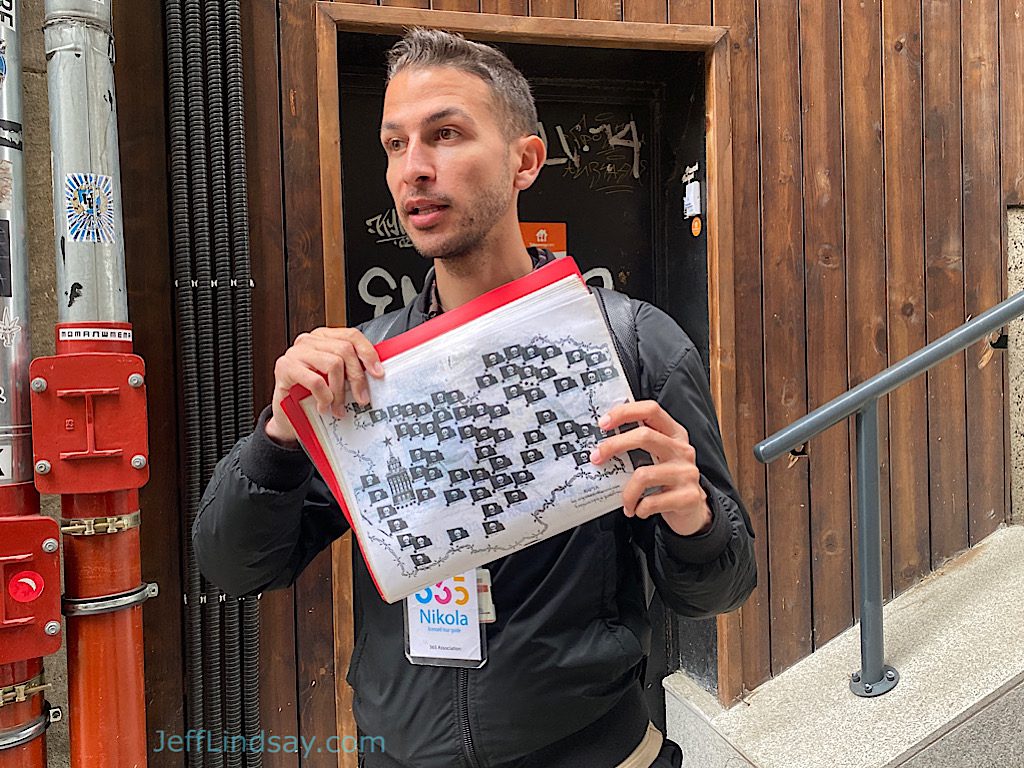 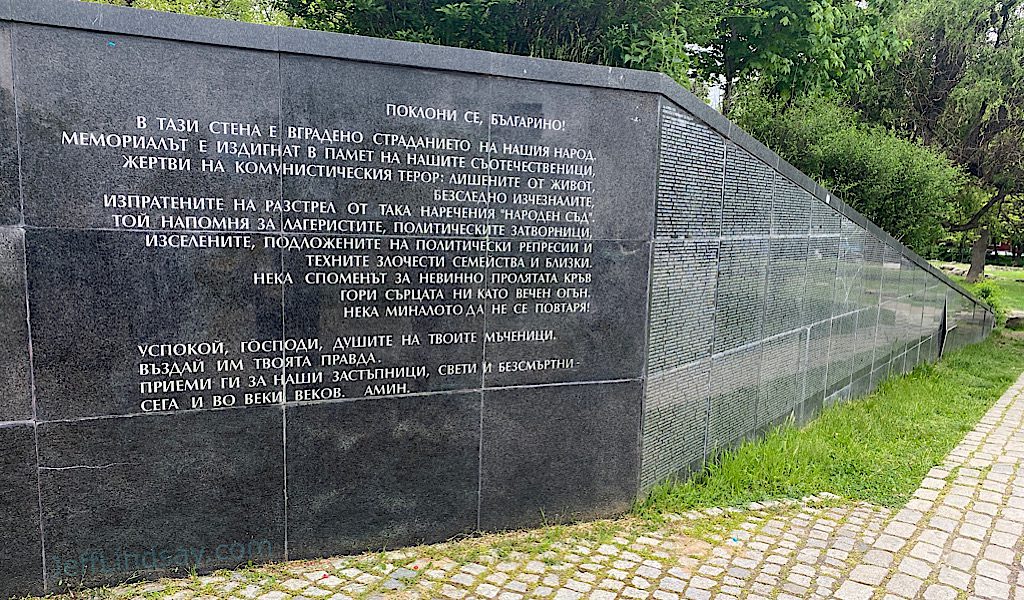 Still, the area of Communism achieved some positive things. Improved job equality for women was one and greatly expanded literacy through focused government programs. The era that followed, still led by many of the same people leading the country during the Communist era, suffered from economic instability with hyperinflation and corruption. So simply not being Communist is not enough to make a country flourish. The nation remains somewhat divided when it comes to judging Communism. From his own family’s experience, our tour guide knows how sensitive the topic of Communism is. One grandmother was fond of Communism and the sense of security it gave her, especially in light of the chaos of hyperinflation that came after the fall of Communism. But his other grandmother could never forget the brutality of Communism, after having her own father be dragged away for unknown reasons by the regime where he was treated cruelly for 18 months. He refused to even talk about what had happened when he was finally released for it was so awful. When the two grandmothers were both present at family gatherings, there was always some tension whenever politics came up. Sensitivity to such feelings among Bulgarians is one reason why the Communism Tour seeks to present both the the positive and the negative sides of the Communist era.

Even with deference to the pro-Communist sentiment that remains in Bulgaria, it’s impossible to gloss over what happened. In addition to the thousands killed, tortured, or detained, beginning in 1984 the Bulgarian Communist dictator decided it was time to “unify” Bulgaria instead of having the diverse communities that had managed to get along relatively well for decades if not centuries in some parts of the country. Thus, it was time to crack down on the many Muslims living there. The dramatic changes beginning at that time are reported in “Words matter. Bulgaria and the 30th anniversary of the largest ethnic cleansing in cold war Europe” by Tomasz Kamusella in New Eastern Europe, February 25, 2019:

In the summer of 1989, between May 30th and August 22nd, communist Bulgaria, led by the dictator of three decades and a half, Todor Zhivkov, unilaterally expelled 360,000 Bulgarian citizens to neighbouring Turkey. The expellees belonged to this country’s Turkish minority of over one million, who officially had been declared non-existent in 1985. Bulgaria was posed as a completely homogenous nation-state, without any non-Bulgarian minorities. The ethnonym “Turks” was banned from the press or any official use. However, the code term “Bulgarian Muslims” was retained for referring to Bulgaria’s Turks. The authorities kept tabs on this minority and knew well who was a Turk, despite the country’s Constitution of 1971, which prohibited any discrimination on racial, ethnic (national) or religious grounds (Article 35.4).

The last act of achieving such an ethnolinguistically and ethnoreligiously homogenous Bulgaria was the forced assimilation campaign of late 1984 and early 1985. As a result of this brutal and heavily militarised action, the “Islamo-Arabic” names of 800,000 people were Bulgarianised, that is, replaced with Slavic and Christian names, seen as “Bulgarian.” Widespread protests involving some 15,000 demonstrators were summarily suppressed and the notorious Belene concentration camp on the eponymous island in the Danube reopened for the incarcerated “ringleaders”.

Governments of all kinds can become racist and cruel, but increased power in the hands of one cruel man can be unstoppable. Freedom and limited government is more likely to lead to protection of individual rights and put limits on the harm that a few corrupt men can inflict on minorities or on everyone. As cries for creased censorship abound in our country, this might be a good time to speak out on the virtues of liberty, free speech, and, of course, it’s sister, freedom of religion.

If you are lucky enough to visit Bulgaria, please consider the Communist Tour. A highlight among many wonderful highlights in this free, beautiful, and delicious nation. I’ll share more later, but here’s a photo of one of the great religious edifices in Europe, the St. Alexander Nevsky Cathedral in downtown Sofia, which was just a short walk away from where we stayed with a good friend. During our visit there, we attended a portion of a religious service where the choir, singing from a small balcony, filled cathedral with the most beautiful, angelic voices I can recall. The acoustics are marvelous. 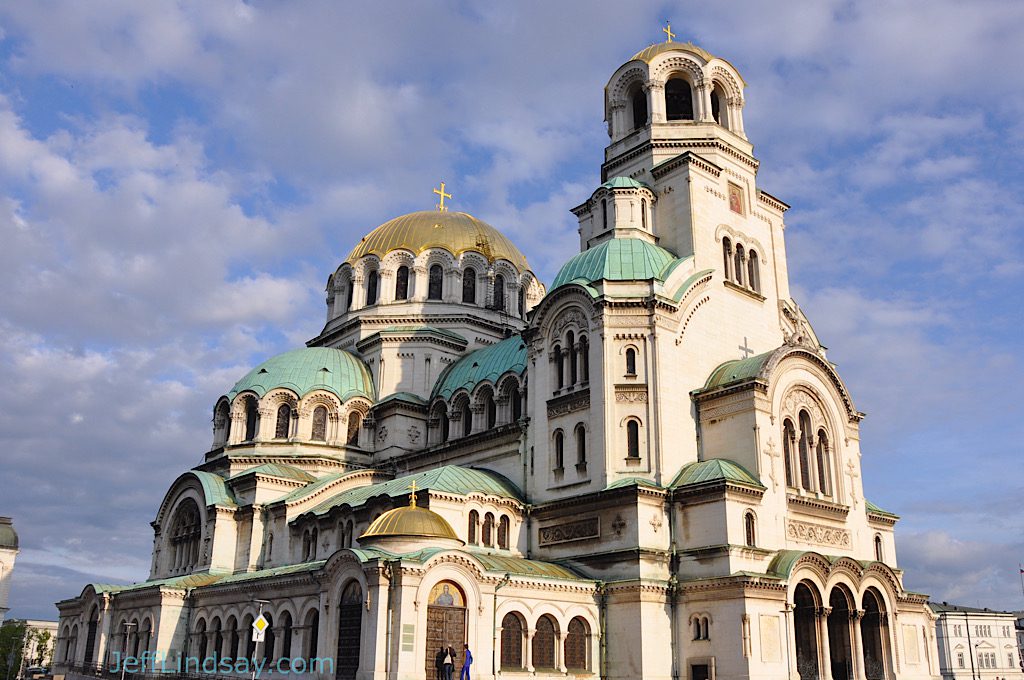 P.S. – If I’ve made any obvious blunders in reporting events in Bulgaria, blame me and my poor notes rather than the Communism Tour. I would also welcome any recollections on time spent in Bulgaria. I was truly delighted with what I encountered there, from the streets of Sophia to the mountains of Rilla and some small villages along the way. Great people, a good degree of religious freedom, beautiful views, and delicious but inexpensive food.

21 thoughts on “Lessons from Bulgaria: The Dangers of Censorship”