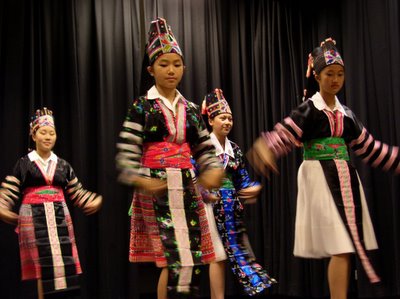 During a talent show our ward held, some of the youth from the local Hmong branch (the Fox Cities Hmong Branch) performed some dances in their traditional Hmong attire. Very enjoyable! Having many Hmong members in Appleton adds a lot to the flavor and diversity of the Church here. Some of my best church-related experiences have been with the Hmong people. (Also some painful ones as well.)

More photographs of local Hmong people (including many LDS friends) are available on my photoalbum of the Hmong people in Wisconsin at Sanity Defense.

What are your thoughts on the pros and cons of having separate non-English speaking branches for immigrant groups in the US? They are often aimed at the adults, I should note, since the kids usually speak English well.