Update, April 30, 2019: Today I noticed there is another document from Oliver Cowdery mentioning Katumin and giving the same English text that Phelps provides. The document is listed as “‘Valuable Discovery,’ circa Early July 1835.” Interestingly, Cowdery places some of the same Egyptian characters in line with the English. His document, from a notebook signed on the cover by Joseph Smith, associates only 6 or 7 characters with the English text, which may explain what he means when speaking of the “comprehensive” nature of the Egyptian and may indicate that Phelps believed he had only provided part of the translation of the Egyptian after all. I may have been wrong in my analysis below, at least in part.

Cowdery, like Phelps in his notebook, spells the names without the added “h” after some vowels that would become more common after Joseph and his brethren began study Hebrew at the end of 1835 and especially in 1836 when Joshua Seixas came to Kirtland at Joseph’s request. These spelling clues may be one of the most important things about these documents, showing how spelling changes after Joseph and his brethren began zealously learning Hebrew from Joshua Seixas in early 1836, which has the surprising implication that the dates many people have assumed for the Kirtland Egyptian Papers are simply too early, and may need to be reclassified as 1836 works, thus coming after the translation of at least much of the Book of Abraham had been completed. Further research is needed on this issue. See the discussion on my following post from April 30, 2019, “Two Important, Even Troubling, Clues About Dating from W.W. Phelps’ Notebook with Egyptian ‘Translation’.”

My original post here follows. Take it with a grain of salt, though it may still apply to what Phelps initially thought.

It is possible that Cowdery’s document influenced Phelps and made him realize that the translation he provided may only be a partial translation, leading to the later use of pencil to add “in part” in a note on his document. Or Phelps may have understood that same association of characters. Cowdery’s final character is backwards compared to Phelps, showing how poor the quality was for the copying of Egyptian characters. Phelps’ view of the relationship between the Egyptian and the English may have changed, leading him to later pencil in “in part,” or it may have been the same as Cowdery’s all along. In any case, this important data does show that at least one scribe may have attributed a large number of words to a few Egyptian characters, with 7 or 8 characters representing about 50 words of English — still not one character for hundreds of words, though Cowdery’s second sentence has just one character, making it relatively expansive. This certainly weakens the argument that there was a much less compact relationship. However, with Katumin occurring at the beginning and again in the middle of Phelps’ English and in the Egyptian characters associated with it. it may be that when he penned his statement, he thought the ratio of Egyptian to English was not much smaller than 1, but later changed his mind based on input from Cowdery. Still unclear.

These issues are secondary compared to the more important issue coming from this document: the pre-Seixas spelling of Onita and Katumin in Phelps’ document, with the same spelling of Katumin in Cowdery’s, while he has “Onitas” instead of Onitah

The manuscript from W.W. Phelps that presents three lines of Egyptian and four lines of English as a translation deserves more attention, in my opinion (see the document and discussion in my recent post, “Did Joseph’s Scribes Think He Translated Paragraphs of Text from a Single Egyptian Character? A View from W.W. Phelps“). Some have argued here that the later addition of a faint “in part” on the page is consistent with the idea that Phelps thought Joseph was translating large chunks of text from single characters, but there’s no hint of such a view in Phelps’ letter. But let’s take a closer look.

Alphabet A: “Kah tou man   /  the name of a royal family in female line”

Alphabet B: “Kah-tou=mun / The name of the a royal famil[y]— The female line”

The symbol for this female name is something like an “0” or a pair of adjacent parentheses.

Interestingly, Phelps’ English translation begins with a variation of this name:

Katumin occurs twice, once at the beginning (reading right to left) and again midway. Now look at the Egyptian. Notice any “O”-like symbols? There is a double O at the beginning and then another almost exactly in the middle of the text:

Why the double “O” at the start? Not sure. But notice the horizontal line over that lead O, connecting it to the next. Could this be related to the character for “princess” in the Egyptian Alphabet? It’s a horizontal line with a little blob on the upper part of the left end. From Alphabet C:

Without the blob, it can mean daughter:

Maybe Phelps thought a Katumin “O” with the horizontal line added for “Princess” could have the blob blow up to another Katumin marker. Or maybe he thought the line mean Katumin was a daughter of a king, equivalent to “princess.” Sure, he didn’t know what he was doing, but there’s a possibility that using the Egyptian Alphabet, he saw “Katumin, Princess” or “Katumin, daughter” (of a king) at the beginning, and again a Katumin in the middle. Note that both instances are followed by what may be the same character, a pair of circles connected by a vertical line. Perhaps Phelps thought this described a parent-child relationship, so the first occurrence is “translated” to express that she was a daughter (of a king), and the second to express that she was born (during the reign of her father).

Some characters occur in his Egyptian that also show in the Alphabet, including several related characters that can mean king, Pharaoh, or first being:

The name “Onitah” also occurs here, as it does in the Book of Abraham manuscripts with occasional Egyptian characters in the left margin. Here is the one that is associated with the paragraph speaking of Onitah, followed by the English text it is next to, both taken from Book of Abraham Manuscript C, page 2: 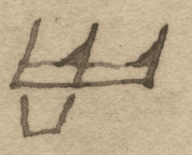 Here is the text:

now this priest had offered upon this altar three Virgins at one time who were the daughters of Onitah, one of the royal descent directly fro[m] the loins of Ham; these Virgins were offered up because of their virtue, they would not bow down to worship gods of wood and <​or of​> stone

One speculative theory might be that Phelps saw this character as somehow related to the name Onitah, and saw it as characterized by having three vertical lines rising from a baseline. If so, he may have seen a relationship to one of his Egyptian characters that would be in roughly the “right place” (my opinion) for the occurrence of the name Onitah in his translation. Yes, speculative.

The table below shows the Egyptian characters, as I guess Phelps may have broken them up. I number them and also list a column for “echoes” where I group together some characters that may look related, and assign the letter A through H for the groupings.  Possible meanings in Phelps’ mind are listed in the fourth column, all speculative. If the meaning comes from a similar character in the Egyptian Alphabet, I give the word without parentheses around it. If it’s just my guess without support from the Egyptian Alphabet (which is hopelessly incomplete if it were supposed to be a tool for translating Egyptian), then I put the word in parentheses.

The groupings I see are:

In any case, the existence of duplicate Egyptian characters such as 2 and 31, and the apparent appearance of Katumin at the beginning and middle in both English and Egyptian (using what Phelps would have understood from the Alphabet, that is), suggests that Phelps’ English text is not his “translation” from a single character, but from many characters of Egyptian.

9 thoughts on “Digging into the Phelps “Translation” of Egyptian: Textual Evidence That Phelps Recognized That Three Lines of Egyptian Yielded About Four Lines of English”