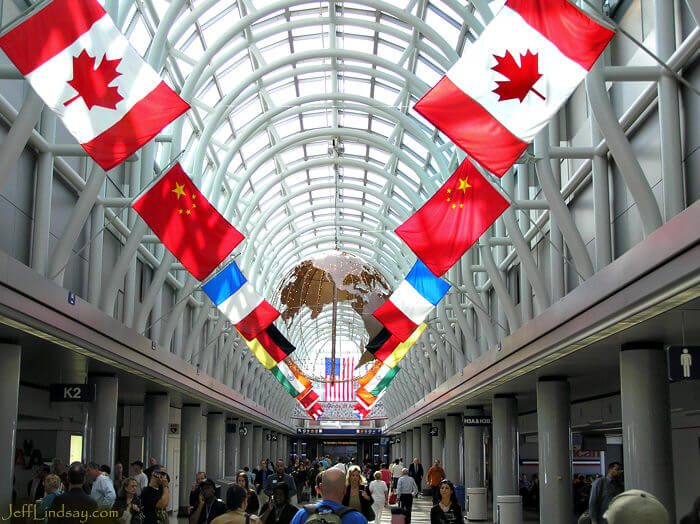 On my recent trip to several parts of the United States, I was in the Chicago airport for a couple of hours on my way to visit my parents. I planned to spend some time with my parents to help them with some issues they are facing. To prepare, I had spoken a few weeks ago with my sister who lives in England and needed to speak with her again. She has spent a lot of time with them recently and is most aware of the details of their situation. However, two recent call attempts, email, and text had failed, probably because she has been extremely busy herself.

My wife and I had been sitting at our gate, but eventually both felt it would be good to wander down the hall and look for some food. We considered McDonalds but I couldn’t see anything I would want to eat, so we continued further to a food court. With hundreds of people around me, my eyes were simply drawn to one particular woman who seemed familiar. As I got closer, i realized this was my sister, the very person I most needed to talk to in order to help my aging parents deal with some very serious issues.

She lives in England. what was she doing at the O’Hare Airport? We had no idea she was in the United States, but she had come here on a very quick trip to take care of another complex issue and was now on her way back to England. The chances of meeting her in the huge and busy Chicago airport were minuscule, yet there she was, the person I most needed to see and had tried to reach recently without success. The information I got from her during our chat would help us in our visits with my parents and make us much better aware of their needs. Just a random coincidence? Yes, perhaps, but it was certainly the kind of coincidence that should at least open one’s mind to the possibility of a blessing from the Lord. The proper response, even if it was just coincidence this time, is gratitude, in my opinion, and a recognition of at least the possibility of the hand of the Lord in the event.

There are some coincidences that really are random or from sources other than divine intervention. The investigator who is visited by an anti-Mormon minister just after meeting with Mormon missionaries may be experiencing a coincidence, or the result of well-meaning friends arranging the coincidence to save a soul from Mormonism. Likewise, it is possible that the person who prays to know the truth and then sees an ad for the Mormons on TV right after the prayer or gets a knock on the door from missionaries may be experiencing a coincidence. It could be by divine design, but coincidence or not, the process of deciding to accept the LDS religion obviously must involve much more careful diligence than just relying on a lone coincidence, even if it may have been a deliberate blessing. It’s fair to be open to the possibility of meaning behind the event, but it is not the end of the investigation process.

Life is full of coincidences. Some may seem both wildly improbable and a genuine blessing that solves a major problem, as my encounter in the airport did. For coincidences of that nature, I think it is fair and healthy to recognize that it may have been by divine design and to receive the blessing with gratitude. But be careful not to let a strange coincidence replace the careful consideration needed in making important decisions.

12 thoughts on “Coincidence or Miracle?”