In an earlier post here at Mormanity, I discussed an intriguing aspect of the temple that Nephi built. I am especially indebted to a chapter from Kevin Christensen, “The Temple, the Monarchy, and Wisdom: Lehi’s World and the Scholarship of Margaret Barker” in the Glimpses of Lehi’s Jerusalem by John Welch, David R. Seely, and Jo Ann N. Seely (Provo: Maxwell Institute, 2004), and to Don Bradley’s presentation, “Piercing the Veil: Temple Worship in the Lost 116 Pages,” FAIRMormon.com, 2012. In that post, I noted how these LDS scholars help us recognize that the Nephites had sacred relics for their own “ark” that have remarkable parallels to the scared relics that were in the Ark of the Covenant of Solomon’s temple.

Four of the five sacred relics of the Nephites that I discussed have fairly clear parallels to their Old World counterparts: the interpreters like the Urim and Thummin, the metal plates like the stone tablets with the law, the sword of Laban as a symbol of authority like the rod of Aaron, and the Nephite breast plate like the High Priest’s breastplate. The least obvious and most interesting parallel deals with the pot of manna preserved in the Ark of Solomon’s temple.

A possible Nephite parallel is introduced using language that may have been crafted to serve as a parallel to the sacred manna which, according to Exodus 16:13-15, was discovered in the desert in the morning and was described as “a small round thing” which obviously astonished them, “for they wist not what it was.” In parallel, it was on a morning in the desert when Lehi was also surprised with his discovery of another gift from the Lord to weary travelers seeking a promised land: “As my father arose in the morning, and went forth to the tent door, to his great astonishment he beheld upon the ground a round ball of curious workmanship” (1 Nephi 16:10). Round, like the “small round thing” that astonished the Hebrews on an earlier morning. Update, 1/30/15: As noted by a helpful commenter, the word “round” in this KJV verse doesn’t appear to be supported by the Hebrew text and is not used in other translations. But the gist of the parallel still stands.

Lehi’s Liahona serves as a fitting parallel to the pot of manna, a symbol of the Lord’s mercy and deliverance. And like manna, it wasn’t a gift to be taken for granted, but could quit functioning as a result of rebellion.

With relics to match each of the relics of the Ark of the Covenant, the Nephites could have a reasonable imitation of Solomon’s temple in spirit and function, making the Holy of Holies an suitably sacred place.

There’s more to the Liahona that we should consider. Long ago I had correspondence with a man studying to become a Rabbi who was also impressed with the Book of Mormon as an authentic ancient Jewish text. He wasn’t LDS and I’m not sure what became of his interest, but he offered his rough analysis of the word Liahona, opining that it was good Hebrew. He said the name (lamed-yud-hey-vav-nun-alef in Hebrew) is related to known Hebrew words with relevant meanings:

That was interesting, but recently I noticed that a much more complete exploration of the name has been conducted: James Curci, “Liahona, ‘The Direction of the Lord,” An Etymological Explanation,” Journal of Book of Mormon Studies, vol. 16, no. 2 (2007): pp. 60-67, 97-98. Curci concludes that Liahona is a word coined by Nephi and/or Lehi using Hebrew elements conveying the meaning “The Direction (Director) of YHWH” or literally “To the Lord Is the Whither.” As is so often the case in the Book of Mormon, there are interesting Hebrew word plays in the text that only recently are coming to light. In this case, the use of the word “whither” in relationship to Liahona-related passages in First Nephi link to the “whither” (hona) element of the name. Here is an excerpt from the PDF of Curci’s paper: 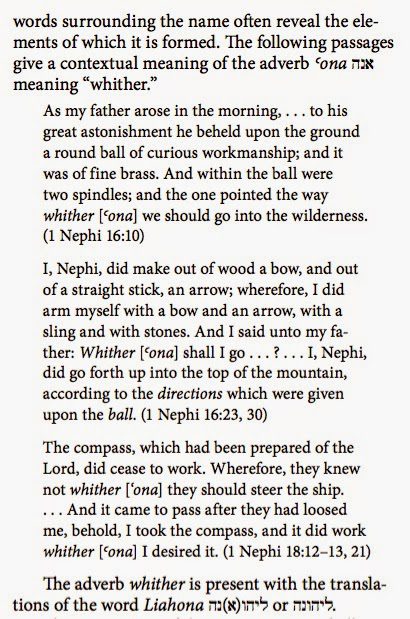 41 thoughts on “The Increasingly Interesting Liahona”