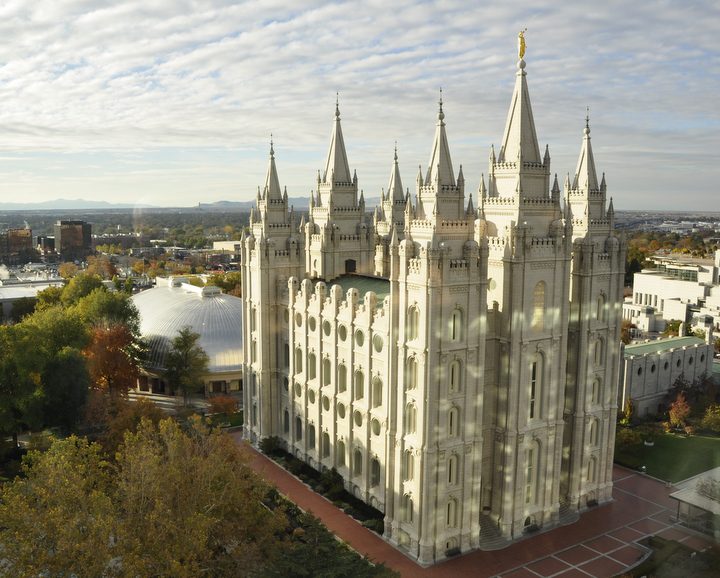 Hordes of critics are wringing their hands, often gleefully, about the uncharitable “hoarding” of the Church, based on shocking claims that the Church has been saving some of the money that members donate to it.

“Hoarding” is one of those emotion-laden terms often used to win an argument without the need for logic and evidence. A Church is “hoarding” its money — the shame! Such misers! That word is sometimes used to advantage when politicians, mobs, or other criminals want to take something that somebody has diligently saved.

“Hoarding” was the key term used for a remarkable episode of looting in the 1930s when President Franklin D. Roosevelt discovered that the President somehow had power, much to the shock of the Founding Fathers on the other side of the veil, I suppose, to take away the gold that citizens had earned and saved. He declared that those vile citizens were “hoarding” gold and thus would be required to sell it to the government at the low price of $20.67 an ounce, after which the official price was $35. See Wikipedia’s article on Executive Order 6102. They were not only deprived of the right to hold and pass on to prosperity their own legally acquired property, but were forced to sell it in effect at nearly a 50% discount to its value. “Hoarding” gold became a crime with a 5-10 year prison sentence. It was a dark day for property rights, especially in a land where the Constitution, still routinely ignored these days, specifically declares gold and silver to be legal currency (Article 1, Section 10). For further background on hoarding and the Great Depression, see “The Virtue of Hoarding” by George Ford Smith, 2009. (To be fair to both parties, note that FDR’s predecessor, Herbert Hoover, had also done the work of the banking interests by denouncing savers holding their money at home in 1932 as “hoarders,” even “traitorous” hoarders, who were hurting the economy by not putting their money into dangerously fragile US banks.)

Shameful as hoarding may be, I hope our anti-hoarding critics will have the wisdom to do a little hoarding in their own lives. May they hoard a little cash, some food, some clothing, some drinking water, some flashlights and batteries, and some sustainable ink-jet paper to be prepared for trouble ahead, whether it’s a blizzard, a power outage, economic collapse, or violent retribution from nations who don’t think that one lone Very Powerful Man in the US has the legal right to arbitrarily kill their political or military leaders (and anyone standing nearby) at will anywhere in the world without any kind of trial if those leaders have done or are said to have done very bad things. (e.g., terrorism, killing people with drones or other means, bombing or invading foreign countries, and perhaps even hoarding for all we know). There are many reasons individuals should recognize that there might be trouble in the future. Smart folks prepare now — or “hoard,” if you insist.

A whistleblower claims the Church has been saving about 1 dollar of every 7 received, and investing it rather than spending it. With successful investments over many years, the savings have accumulated into a sizable stash that can support the Church’s charitable work in the future even if grave economic trouble again strikes us and the Church. But since that stash is not being spent rapidly now to keep the Church as close to insolvency as possible, we are “hoarding” and should be ashamed (frankly, our most vocal critics would certainly prefer that we spent $10 for every $7 received, ensuring eventual economic disaster, contrary to the  entrenched Keynesian views of our government leaders who think that explosive debt will never be a real problem). Think of all the good that money could do if it were handed over to, say, random people on the street or to our critics and the whistleblower (who hopes to get 10% of some huge amount) or to the Clinton Foundation or if it were used to buy carbon credits or to save the earth by investing in green energy scams companies like Solyndra. Better yet, we could work a real miracle by giving it to Congress, whose financial wizardry can turn $1 billion of revenue into $2 billion or more of spending on noble causes that help solve global problems by supporting brilliant initiatives from our politicians that are only occasionally linked to their friends and relatives.

Giving out lots of money in ways that don’t line the pockets of drug dealers, warlords, corrupt politicians, gangsters, scams, and the like is not as simple as it sounds. Major charities can easily spend 30% of their income on finding appropriate places to spend and in managing the spending. It’s hard work and requires lots of professionals. I can only imagine the outrage if the Church started adding hundreds of millions in overhead to do find ways to more rapidly spend down its surplus.

For an organization that had all of its assets seized a little over a century ago, was having severe financial challenges in the late 1950s as I understand,  has had its assets seized in recent years for a while in Ghana (thanks to agitations from some thoughtful anti-Mormons), faces constant threats of costly lawsuits, and faces greatly expanded costs as it expands in poor nations that will require significant investments, one of the most prudent things the Church can do in this time of relative prosperity is to prepare for the future by setting aside a small amount of its income to sustain its ongoing charitable mission. Spending it all now and then being one lawsuit or one recession away from disaster would be foolhardy.

The Church should be held up as an example of frugality, of prudent investment, and financial responsibility. The money saved and the funds donated are not being used to enrich its leaders or buy them mansions to live in. Those funds are used frugally, yet at the same time, the Church is able to be generous in aiding the poor and in helping the needy in many lands. The criticism from those who think they know better is misguided.

As for the shaming of those who encourage the poor to give voluntarily to a charity that doesn’t really need their money, how would you have reacted when Christ, the true Owner of the treasures of the earth and beyond, looked on passively, even approvingly, and utterly failed to prevent a poor widow from casting in her last bit of cash into the donations box (or “hoarding” box) at the Temple in Jerusalem? What would you have shouted in response when He dared to hold her up as an example of faithfulness? The Creator of the Cosmos did not need her money. The hoarders at the Jewish Temple and its charitable branches did not need her money. How dare Christ allow her to make such a huge sacrifice and encourage others in poverty to do the same?! But many Latter-day Saints know the answer. The prime purpose of the principle of sacrifice and tithe paying is not about giving God or the Church more money to “hoard,” but about changing our lives and priorities to more fully follow the Savior. It’s not about taking money from us, but giving us a chance to better follow Him and, indeed, to gladly take even more from Him.

In their criticism of the Church’s teachings on tithing and the experiences shared by so many members, some critics mock the idea that a community, family, or individual might be better off in some way by giving charitably to the Church, in spite of the frequent experience of those who tithe faithfully that they don’t miss the money and feel blessed and helped, even if it is only by learning how to be frugal and spend less. While they mock the idea that voluntary sacrifice might bring benefits, I note that many of our critics tend to wholeheartedly endorse compulsory sacrifice, i.e., raising taxes on others, as the way to economic prosperity. If voluntary giving does not help, why is compulsory sacrifice so magically beneficial? Greatly increased compulsory extraction of wealth from those capable of creating it and putting into the hands of politicians so they can redistribute it their way is touted as the miraculous but ever-failing panacea to poverty and social ills. Yet it’s nonsense to think that there could be any benefit to voluntarily giving to a charitable organization that helps people strengthen their lives, families, and communities? As always, I guess I’m missing something.

Daniel Peterson has given us some wise guidance on these issues in his series, “LDS, Inc.” See, for example, his recent “LDS, Inc., Part 21.” For a solid overview of the non-scandal with some wise legal and financial observations, see Aaron Miller’s “The $100 Billion ‘Mormon Church’ story: A Contextual Analysis.”

57 thoughts on “The “Hoarding” Church”