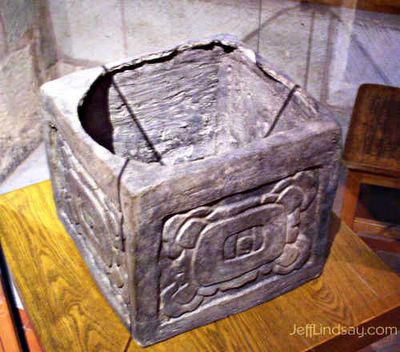 A stone box from Mexico’s Valles Centrales (central valleys) region of Oaxaca dating from 900 A.D. to 1521 A.D. On display in the Cultural Center at the Santo Domingo Cathedral in the city of Oaxaca.

I took the above photo back in March while my family was in Oaxaca for a few days. Though not directly “Book of Mormon evidence,” it reminded me of how much things have changed since 1830, when the idea of ancient records on metal plates in stone boxes was utterly laughable. Since then, many examples of ancient writing on gold plates have been discovered. Further, the whole idea of ancient religious communities preserving and hiding sacred records for future times seemed a lot less ridiculous after the find of the Dead Sea Scrolls. The community at Qumran took careful steps to “embalm” their records before they were buried, seeking to preserve hidden sacred records for future generations. Details on ancient practices to hide and preserve documents, including whole libraries of buried documents, and in particular the use of metal documents in stone boxes, are given by H. Curtis Wright in “Metal Documents in Stone Boxes,” in John M. Lundquist and Stephen R. Ricks, eds., By Study and Also by Faith, Vol. 1 (Salt Lake City: Deseret Book, 1990), pp. 273-334. ncient writing on metal plates is most attested in the ancient Near East, as is the use of stone boxes to preserve records. But this ancient ceremonial stone box from Mexico suggests that the concept of stone boxes for special purposes was also known in the New World, for whatever that’s worth.

1 thought on “Stone Boxes and the Book of Mormon”