Some folks are ablaze over the insulting and trashy cover on Bloomberg Businessweek‘s latest issue featuring a story on how the Mormon Church makes money. Painfully illustrating what can happen when once respectable publications face declining public interest in their writing, journalistic responsibility and professionalism go out the window for a cheap shot at one of America’s favorite Christian religions to belittle. 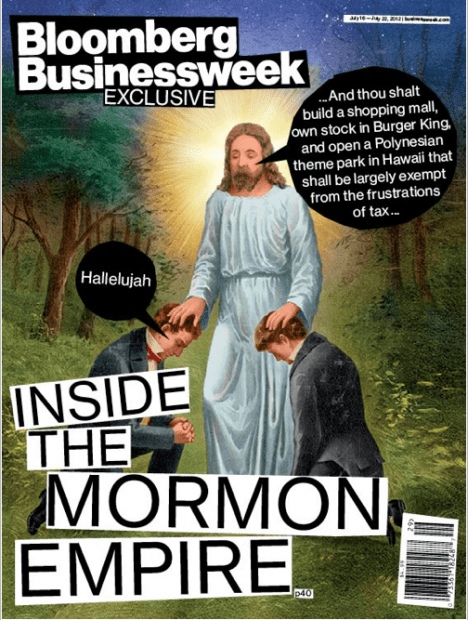 [Update:] The cover, if you know nothing about the Church, mocks what is considered a sacred event in the founding of The Church of Jesus Christ of Latter-day Saints. It depicts the restoration of ancient priesthood authority from God to the earth, with an angel, the resurrected John the Baptist, giving divine authority to Joseph Smith and Oliver Cowdery. That restored power would allow them to baptize one another and carry out other work leading to the founding of the Church. This was a sacred moment, one of several moments of contact between heaven and earth in the founding of the Church, and whether you believe it or not, mocking it on the cover of a business magazine simply doesn’t come close to basic standards of journalism. Yes, professional journalism does actually have some standards, and Jay Evensen of the Deseret News carefully explains why Bloomberg’s cover for this story is unethical and unprofessional.

Bloomberg might do better to learn from the Church’s financial independence rather than mocking it, which is what the cover clearly does, apart from whatever fair questions might be raised inside. The lessons of thrift, discipline, and sound planning in managing finances are needed more than ever in this world of instant gratification and mounting debt.

But is the Church just a big financial empire now? If so, a financial empire for whose benefit? It’s not Church leaders that are making billions. Many walked away from lucrative careers to serve as Church leaders. Service is about sacrifice and service, from bishops up to full-time leaders who receive a living stipend. The success of the Church in managing its finances is not driven by a desire to enrich a few powerful men, but to reach and change the world. Is it not spending enough on humanitarian needs? Is it accumulating too much? Shouldn’t it have more debt and less savings? And goodness gracious, how can it support a mall?

Those who are out to condemn the Church, especially in this heated election year, will easily overlook the realities of what the Church does and what its message is. The Church, fortunately, has issued a statement to remind us of what they are about, and I think it’s a fair and timely statement that deserves to be considered. From the Church’s newsroom, read “The Church and Its Financial Independence,” dated July 12, 2012.

The Church and Its Financial Independence

The growth of The Church of Jesus Christ of Latter-day Saints from a
fledgling band of frontier Americans to a global faith that blesses the
lives of millions is one of the great religious success stories of the
19th and 20th centuries.

From the very beginning, members of the Church displayed a remarkable ability to set aside material things for spiritual goals. One of the earliest Church members, Martin Harris,
mortgaged his farm to pay for the publication of the Book of Mormon. Other examples of self-sacrifice among the early Latter-day Saints abound.

Driven from place to place — from Missouri to Illinois to
the far reaches of the western frontier — Church members several times
abandoned their homes, farms and cottage businesses they had lovingly
nurtured. By the time they made the final great trek across the American
Plains to the Rocky Mountains, many were already impoverished. Those
who came by handcarts because they could not afford wagons are a
poignant testimony to that fact.

Brigham Young once remarked that if the Latter-day Saints could have 10 years unmolested in the Rocky Mountain valleys, they would establish themselves as an independent
people. Over time, Brigham Young’s vision of a thrifty, independent and
spiritual people largely came to be realized.

Complete financial
independence and freedom from debt would take several decades, however.
Historians today point to the early 1900s as the time when the Church
finally began to turn the corner and free itself from decades of
indebtedness — specifically highlighting a sermon by Church President
Lorenzo Snow in which he called on the Latter-day Saints to renew their
commitment to the principle of tithing.

Tithing is an ancient
biblical principle and has been practiced by many churches through the
centuries. Independent studies show, however, that nowhere else in
America today is the principle of tithing so widely and faithfully
followed as among members of The Church of Jesus Christ of Latter-day
Saints. The vast majority of the income used to manage the Church comes
from tithing, not from businesses or investments.

Tithing has thus proved to be an enormous blessing to the Church and its people, along
with simple but sound economic principles such as avoiding debt, living
within one’s means and setting aside funds for a rainy day.

The key to understanding Church finances is to understand that they are a
means to an end. They allow the Church to carry out its religious
mission across the world.

Does the Church own for-profit
businesses? Yes. In the Church’s earlier history as it was establishing
itself in the remote Intermountain West, some of those businesses were
necessitated by the simple fact that they didn’t exist elsewhere in the
community. Gradually, as private businesses developed and the need for
Church-owned businesses diminished, they were sold off, donated to the
community or discontinued. Zions Bank and the LDS Hospital system are
examples.

Today, the Church’s business assets support the Church’s
mission and principles by serving as a rainy day fund. Agricultural
holdings now operated as for-profit enterprises can be converted into
welfare farms in the event of a global food crisis. Companies such as
KSL Television and the Deseret News provide strategically valuable
communication tools.

From time to time, some people, including journalists, try
to attach a monetary value to the Church in the same way they would
assess the assets of a commercial corporation. Such comparisons simply
do not hold up. For instance, a corporation’s branch offices or retail
outlets have to be financially justified as a source of profit. But
every time The Church of Jesus Christ of Latter-day Saints builds a
place of worship, the building becomes a consumer of assets and a
financial obligation that has to be met through worldwide member
donations. The ongoing maintenance and upkeep, utilities and use of the
building can only be achieved as long as faithful members continue to
support the Church.

On occasion someone will try to estimate the
Church’s income and determine how much of that is used to care for the
poor and needy. Again, they rarely capture the whole picture. The
bedrock principles underlying the Church’s welfare and humanitarian
efforts are Christlike service and self-reliance.

Nearly 30,000
bishops who oversee their respective congregations have direct access to
Church funds to care for those in need, as they help members achieve
self-sufficiency.

At Welfare Square in Salt Lake City, where the
Church cans goods for its distribution warehouses, some procedures would
be more efficient if automated. Instead, the Church has opted for more
labor-intensive production lines that provide opportunities for people
to give service and for welfare recipients to work for what they get.
This is not the pattern of a commercial business, but it is the pattern
for helping people to help themselves. The Church’s aim is to help
individuals to overcome temporal barriers as they pursue spiritual
values.

Published numbers related to our humanitarian efforts
include only dollars spent directly on humanitarian service. The Church
absorbs the administrative costs. Furthermore, these numbers do not
reflect the Church’s extensive welfare and employment services that
serve many thousands worldwide. They also do not represent Deseret
Industries thrift stores that provide vouchers to other charities for
their use, donations to food pantries, or humanitarian- or
welfare-focused missionary service or support given to aid other relief
organizations in their missions. Hundreds of thousands of hours of
donated service underpin Church programs such as these.

The Church exists to improve the lives of people across the world by bringing them
closer to Jesus Christ. The assets of the Church are used in ways to
support that mission. Buildings are built for members to come together
to worship God and to be taught the gospel of Jesus Christ. Missionaries
are sent to invite people to come to Christ. Resources are used to
provide food and clothing for the needy and to provide ways for people
to lift themselves up and be self-reliant. What is important is not the
cost but the outcome. As former Church President Gordon B. Hinckley
said, “The only true wealth of the Church is in the faith of its
people.”

Those who attempt to define the Church as an institution
devoted to amassing monetary wealth miss the entire point: the Church’s
purpose is to bring people to Christ and to follow His example by
lifting the burdens of those who are struggling. The key to
understanding the Church is to see it not as a worldwide corporation,
but as millions of faithful members in thousands of congregations across
the world following Christ and caring for each other and their
neighbors.

In my former work as a bishop and in roles in stake callings, I’ve seen a good deal regarding how the Church manages its money including tithing and other funds, how it makes decisions regarding buildings and other projects, and have seen and felt the principles behind its activities. It’s cautious, careful, and generally wise, and I saw nothing pointing to financial motives dominating its work. The claim to be engaged in blessing mankind with the spread of the Gospel as well as humanitarian and compassionate service rings much more true than hollow claims that it’s about financial wealth.

Say, is there any chance that politics is playing a role in Bloomberg’s attack on the Church? Naw, not in a sacred election year! OK, Bloomberg, you’ve played your role well. Too bad that role isn’t journalism. And too bad it doesn’t include high artistic standards. I mean, the artwork on the cover just looks so cheesy. Let’s have higher standards for your next trashy cover, please. Maybe something on Jeremiah Wright, I suppose?

30 thoughts on “Responding to Bloomberg’s Insulting Cover Story, “Inside the Mormon Empire””