For those who want to understand
the things of God and eternity only through the lenses attached to their own
eyeballs, who can only believe what they can see, I would like to ask them how
they can be so confident of the conclusions they might reach through this
means. Science has recently determined that what we can see and measure is only
a tiny fraction of the unseen materials and forces that shape the universe. As
recently discussed here, mysterious
dark matter and dark energy dominate the universe, comprising about 96% of
the matter-energy out there. All our glorious instruments, eyes and hands
included, are incapable of detecting most of what surrounds us in the cosmos.

Apart from that stunning and recent
fact, we stand on one tiny speck of a vast galaxy within a cosmos on millions
upon millions of galaxies. Even if your eyes are very sharp, what you see, even
if you could see dark matter and dark energy, is a vanishingly small fraction
of the scope of the universe. And even for our own domain, in your own town or
apartment or wherever you are, what you see even with the sharpest of eyes is
limited to photons having a wavelength between about 390 nanometers and 700
nanometers. You can’t see ultraviolet or infrared. You can’t see microwaves or
radiowaves or gamma radiation or x-rays. The spectrum of electromagnetic
radiation—light—that places a non-trivial role in the physical world extends far
below and above the range of visible light by many orders of magnitude. What we
can see represents a tiny sliver of the electromagnetic reality right in front
of our noses. Are you so sure you’ve got the full picture, even if you’ve got
20/20 vision? (And I haven’t even mentioned optical illusions. Another fun
topic.)

Here is a representation of the
electromagnetic spectrum, courtesy of Wikipedia’s
article on that topic: 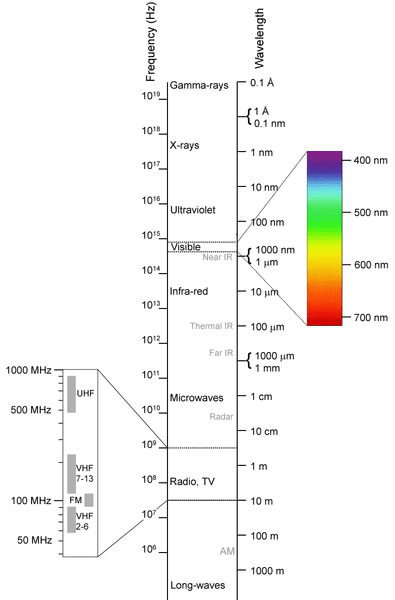 There is vastly more to the
universe and to life than meets the physical eye, and some of the most
important information that we need will be missed if we don’t realize there is a
spiritual dimension to life. Light and truth, spiritual information, can
be conveyed through the Spirit to supplement the pittance of physical data we
obtain with our senses.

Yes, the testimony thing Mormons
talk about isn’t easy and can be confusing. But to trivialize the possibility of gaining information from the Spirit is far more serious than just ignoring 96% of reality or nearly all of the spectrum.
When it comes to the things of God and His beautiful plans for us, this is one
area where we don’t want to be blind.

28 thoughts on ““Eye Hath Not Seen”: Understanding the LDS Testimony”