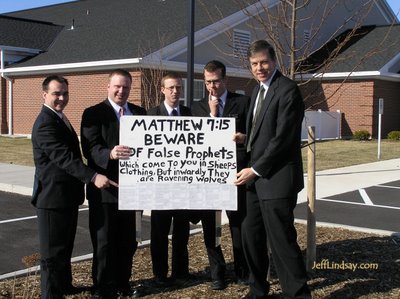 When the Bishop of the newly created Neenah Ward of the Appleton Stake arrived at the newly built stake center in Neenah for his first Sunday of Neenah Ward meetings this morning, he found that a small but sturdy wooden sign had been planted in front of the Church with a friendly spiritual thought from the Bible warning against false prophets. The maker of this sign had undoubtedly been trained in state-of-the-art PowerPoint presentations in Corporate America, for the lower portion of the sign contained extensive text in a microscopic font requiring high-power binoculars to read. The text listed numerous alleged statements of Joseph Smith that show he was a false prophet.

It’s nice to know that others in our community care enough to go to such trouble to welcome us. I suspect it was a local minister since I recently sent out open-house announcements to numerous ministers in the area to invite them to our new building for a community luncheon on April 21, featuring the former mayor of Appleton as the keynote speaker (Sister Dorothy Johnson, one of the most amazing LDS women you’ll ever meet, and one highly respected by thousands in this area).

The photo above (click to enlarge slightly) shows four local missionaries and myself with the sign. We’re standing on the back side of the building for this photo op, although the sign was originally planted in the front. The sign was tossed into a dumpster, but was mysteriously missing after church. I think one of the missionaries wanted it in their apartment as a gag souvenir.

Perhaps a new sign is needed: “Beware of wolves in sheep’s clothing who vandalize the property of others.”