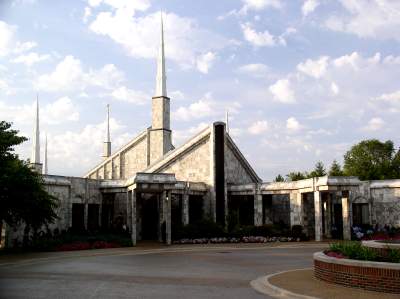 Yesterday I had the privilege of being at the Chicago Temple when my awesome daughter-in-law-to-be received her Endowment. She’s a very smart girl, was well prepared, and was excited about the experience. One thing is for sure: the temple truly is a different place, even foreign and “strange” by modern standards, entirely separate from the profane world. To enter the LDS temple and participate in the temple experience is to enter into a sacred environment and into an ancient tradition as well.

As I’ve mentioned before on my Web site, my understanding and appreciation of the meaning of the LDS Temple grew most dramatically not by reading LDS writings, but by reading two books by modern scholars dealing with ancient religious practices and symbols. Most helpful of all was the book Sinai and Zion: An Entry into the Jewish Bible (Minneapolis: Winston Press, 1985) by Jon D. Levenson , a Jewish scholar at the University of Chicago. (Sadly, it’s out of print.) Also of great value to me was Mircea Eliade’s The Sacred and the Profane, transl. W. R. Trask, (New York: Harcourt, Brace, Jovanovich, 1959). Eliade helped me to see the Temple from the ancient perspective of sacred space, to recognize its meaning and symbolism as the cosmic mountain, an axis that connects the underworld, the living, and the heavens and that provides orientation and directions for our journey in mortality. The significance of altars, of ritual drama, of the emphasis on the Creation, and many other ancient aspects of the modern LDS Temple became much clearer and profound after reading Eliade. But Levenson’s book was most valuable. On page after page, I encountered evidence that ancient Temple practices – covenant making, symbols, meanings – had been restored in a pure and powerful way in the modern LDS Temple.

One of the most exciting discoveries to me was that the typical ancient form of covenant making had been restored (at least in my opinion). This ancient pattern for making a covenant between God and man or a king and his subjects is known as the “covenant formulary” and includes six major steps, though many ancient examples may only have a subset of the six:

This ancient pattern is becoming relatively well known now, and has even made its way into some mainstream Christian sermons such as a recent sermon by Reverend Neil Bramble-Chapman (amazingly, he even mentions the ancient Christian doctrine of theosis in his sermon).

While I do not desire to discuss details of the Temple, each of the six elements of the ancient covenant formulary is present in the LDS Temple, in my opinion. I do not believe that Joseph Smith could have fabricated the structure of ancient covenants based on information available to him, for modern recognition of the ancient covenant formulary only dates back to the 1950s, when George Mendenhall and Klaus Baltzer began comparing biblical literature with other ancient treaties (see discussion in Levenson, p. 26; see also George Mendenhall, “Covenant Forms in Israelite Tradition,” Biblical Archaeologist, Vol. 17, No. 3, 1954, pp. 50-76, as cited by Stephen Ricks in a related essay that I also highly recommend, “Kingship, Coronation, and Covenant in Mosiah 1-6,” in King Benjamin’s Speech, ed. John Welch and Stephen Ricks, Provo, Utah: FARMS, 1998, pp. 233-275, with references pertaining to Mendenhall and other related sources cited on p. 274). Though these elements can be found scattered in the Bible, their significance and their relationship to each other was not appreciated in Joseph Smith’s day.

There is much more in Levenson and other modern writings of ancient practices which puts the LDS Temple squarely into the realm of ancient practice. Some of the elements which deeply impressed me were the relationship between the Temple and the Sabbath day (sacred space and sacred time), the symbolism of the baptismal font (and subterranean waters in general) in the Temple, the relationship between mountains and Temples (also found strongly in the Bible and the Book of Mormon), the significance of covenant making, the link between Zion and the Temple, the things one does to show reverence for sacred ground, the significance of the Creation story, and so on. Levenson probably knows nothing of LDS Temples, yet his writings about the ancient Jewish experience did more for my understanding of LDS Temples than any modern LDS writer had.

That background helped me appreciate the insights into the ancient world that Hugh Nibley has offered in many of his writings.

Please let me know of other resources you recommend on this topic.

1 thought on “The LDS Temple: Restoration of Ancient Practices”