My family (wife and I plus our two younger boys) went to Mexico for spring break, arriving in Oaxaca, Mexico at about noon on Sunday, March 27 (two days later than planned due to serious overbooking by the airlines). The first thing we did after checking in to our little downtown hotel (Casa Cue) was to catch a taxi and head to a couple of local LDS churches in hopes of finding services to attend. Our second try was a success: the Antequra Ward, where we caught the tail end of sacrament meeting and then attended Sunday School. We were delighted at how warm the members were. Over a dozen people came to shake hands and greet us. During Sunday School, after I tried to answer a question in my poor Spanish, a beautiful 5-year-old girl came over to me and handed me the note shown below from her mother, and then the cute little girl gave me a kiss on the cheek with a delightful smile. My wife got a kiss from her, too. The sister who wrote the note to us later chatted with us for a while and just went out of her way to make us feel welcome. 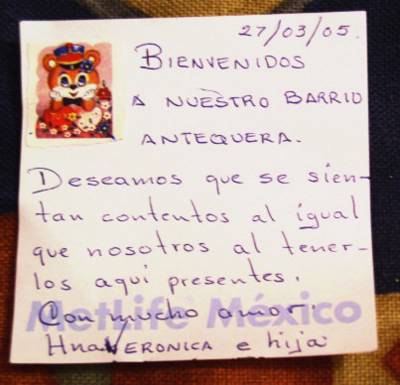 A note we received during Sunday School from a sweet Mexican LDS woman in the Anteqera Ward of Oaxaca, Mexico. The note says something like, “Welcome to our Antequera Ward. We hope that you will feel just as happy as we do at having you present here. With much love, Sister Veronica and daughter.”

OK, I’m not suggesting that you need to send your children around to kiss strangers that walk in the door – I would frankly discourage that in most cases – but my point is that the courtesy and warmth the members of that small ward showed to us as total strangers left a strong impression. If I were going to be living in that area, it would be hard not to want to go back. How wonderful it is to be welcomed by people who genuinely seem to care.

On the other hand, once I attended a ward in a wealthy part of California where I went out of my way to give people a chance to greet me, but was almost completely ignored. As a test, I stood by the doors at the end of sacrament meeting to see how many people would just walk by the stranger on their way out, and I don’t think a single person stopped to greet me or inquire if I was moving in or anything. Maybe they often had too many visitors to deal with (but it was not a tourist area), or maybe I looked too familiar and not like a stranger, but I certainly left with little desire to ever be part of that ward. If I had been an investigator or less active member, that kind of treatment could have been devastating.

The little things we do make a difference. I hope we will all go out of our way to look around and reach out a little more to those around us, especially to the strangers and newcomers and weak ones in our midst. A pound of preaching might do far less than an ounce of simple human kindness.

10 thoughts on “A Great Example of a Ward Welcoming Visitors”