Given all the complexities of preparing the Book of Mormon — multiple ancient sources combined, redacted, then translated into English that is verbally dictated and written by a scribe, then later copied into a printer’s manuscript, and finally put into print — it’s not surprising that there could be inconsistency at times in a text that is still remarkably consistent across the centuries. But now a Mormon scholar has exposed a significant and highly ironic inconsistency that deserves our attention. It’s an example of apparently intentional “ironic inconsistency” remarkably similar to that found in the Bible in 2 Samuel 13–20. The ever insightful Matthew L. Bowen explains in “‘Possess the Land in Peace’: Zeniff’s Ironic Wordplay on Shilom,” Interpreter: A Journal of Mormon Scripture 28 (2017): 115-120:

Regarding the narratological wordplay on the name Absalom (“[my] father is peace”) in terms of šālôm (“peace”) and the verbal root š–l–m
throughout 2 Samuel 13–20, Moshe Garsiel observes that “the entire
story deals in a manner of the most pronounced irony with the absence of
‘peace’ between ‘father’ and son.”1
It is, he notes, an example of the “ironic inconsistency of names to
events” being deliberately highlighted by the biblical writer.2

This observation brings to mind word usage in the brief royal
autobiography of Zeniff recorded in Mosiah 9–10. During his life and reign, Zeniff fights multiple wars with the Lamanites and therefore appears to use the toponym Shilom in a similar, ironic3 way:

Zeniff’s use of parallelistic language in Mosiah 9:5‒6 strongly suggests his correlation of the šlm-derived4 name Shilom with “peace” — Hebrew šālôm. Since the Nephites were a Hebrew-speaking/writing people,5 this correlation makes good sense. We further note Zeniff’s covenant use of the verb know (cf. Hebrew yādaʿ)6 in correlation with “he covenanted with me.” Zeniff seeks a bĕrît šālôm — a “covenant of peace,”7 or what we would today call a “peace treaty” — on terms of equality with the king of the Lamanites.

The last time I mentioned word plays in revealed LDS scriptures, a commenter  objected that it’s impossible (“ridiculous”) to find word plays without the original text. But that’s not quite so. It makes identification of a word play more tentative or speculative, but it can still be done with reasonable plausibility, especially when the proposed word play adds significant meaning to the text or provides reasonable explanatory power in understanding the intent and methods of the authors. 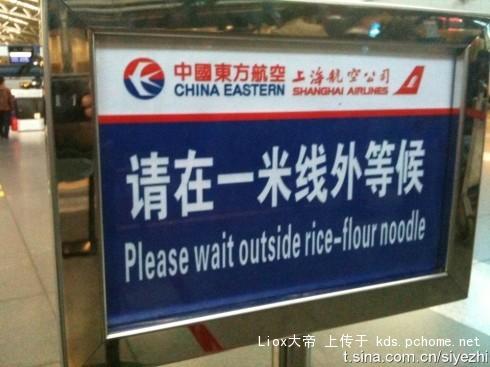 Finding a possible word play in an original text based on examination of a translation is not something unique to desperate Mormon scholars. An interesting example of this comes from China, as I explained in my response to the objection in the comments:

James Fallows at The Atlantic recently mentioned a hilarious example of Chinglish from one of China’s leading airlines at Beijing’s main airport.
An English sign at the check-in area told customers to please “wait
outside rice-flour noodle.” Those familiar with Chinese may be able to
appreciate what happened after a little reflection even without having
the original text to consider, because the common word for a noodle made
from rice flour is mi xian, with mi meaning rice, but it can also mean “meter.” The word xian
can mean line or something like a line, such as a noodle. So Chinese
students can probably guess that the sign was telling people to stand
behind the meter line, or the one-meter line, to keep one meter away
from the agent processing people. But there’s a word play involve here
where the word for “meter line” can also mean “rice-flour noodle.” The
dual meaning, essentially a word play opportunity, created the ambiguity
that led to a very funny translation.

A great deal of English
signage in China and other nations needs to be mentally translated back
into the (apparent) parent language to come up with hypotheses for what
was actually meant. Sometimes that process fails to explain the puzzle,
but often can lead to a plausible scenario with explanatory power.

That’s what may
be going on in the Book of Abraham and the Book of Mormon in quite a
few cases. You are right, of course, that we don’t have the original
test before us, but we can note indicators that point to apparent word plays, and then discuss them as possibilities. Note that I referred to the example in my post as an apparent
word play. It’s not for sure, it’s tentative or even speculative, but
in this case it’s relatively straightforward and provides explanatory
power. I don’t think it’s as ridiculous as you suggest.

For the word play involving Shilom and peace, it’s less speculative than many of the intriguing word plays in the Book of Mormon because here we have a transliterated name from the gold plates, Shilom. This word has long been recognized (see the Book of Mormon Onomasticon entry) as likely being related to the Semitic/Hebrew root š–l–m, “to be whole, or complete,” which links it to the word for peace. The way this word is used in connection with peace and its ironic opposite, including such usage in a case of reasonably clear parallelism, helps us understand authorial intent and suggests we have a deliberate word play and intentional ironic inconsistency in the Book of Mormon, now exposed at last for all to better appreciate. Thanks, Brother Bowen!