Tonight we had an amazing baptismal service in the Appleton Second Ward. Dozens of people came to observe the baptism of a sweet new convert, a young woman named Melody. It was a wonderful and touching occasion. What we didn’t know beforehand was that there would be two baptisms tonight.

Elder Salerno, one of two outstanding missionaries serving in our ward, came to the baptismal service tonight expecting to watch his companion baptize their choice investigator, Melody. As he entered the church, how surprised he was to see his father and mother in the hall. And his father, not a member of the Church, was dressed in white. He had come here all the way from California to surprise his son – and be baptized by him. The Mission President of the Milwaukee Wisconsin Mission was apparently in on this conspiracy. Both President Hunt and his wife attended the touching service.

Many members were choked up by these wonderful baptisms. And we will certainly never forget the story of a father being converted while his son was serving a mission and flying out to take part in a surprise baptism, meeting his son in the halls of the church dressed in white. 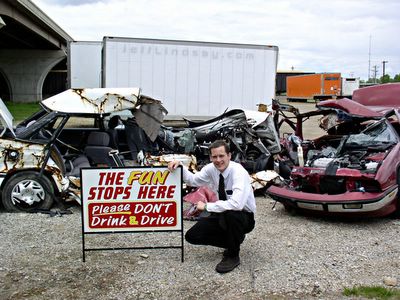 Elder Salerno with an important safety tip from Appleton, Wisconsin.