The Oneida Indian Tribe of Wisconsin held a Pow Wow on April 9 in Green Bay that I was able to attend for a while. I was quite impressed and plan on going to more of these. While there, I talked with the man pictured below. In the Oneida language, his new name means “Bear Who Dances for the People.” He received it as a young man from an Elder of the tribe. The Elder saw him unfold some cloth with a certain symbol on it, and told him that this was what the Elder had seen in his dreams, and that he knew the name the young man was to receive. Receiving this name helped clarify the young man’s mission in life. He told me of the spiritual power he finds in dancing for the people, as he is doing in this photo. His experience with the Elder of the tribe, including the receipt of a new name and a sense of mission in life, reminds me of the LDS patriarchal blessing. We agreed that this was a great blessing for him. I was touched by his gentleness and humility, and by his talk of the significance of sacred dancing and the communion that he finds with the earth. 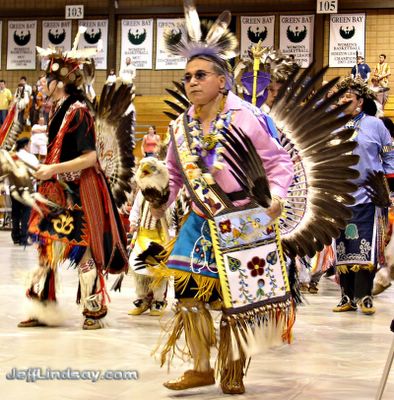 Bear Who Dances for the People – an impressive Oneida man I met at the Spring 2005 Pow Wow in Green Bay, Wisconsin.

I appreciate the spirituality that he has found and the strength of character that he has. I also was deeply touched by the power of the dance that opened the Pow Wow. It was beautiful and even inspiring.

A couple more photos are on my page about the Oneida Indian Tribe of Wisconsin. Members of the Oneida Tribe, by the way, were among the first people in my part of Wisconsin to join the Church and have played a key role in the growth of the Church here. Latter-day Saints are still a small minority among the great Oneida people, but they are a strong a faithful minority that has done much to bless the lives of others.