This is somewhat embarrassing, but it’s best I come clean now. I made a serious mistake in a previous post, “Burying Nahom,” when I said that it would be unlikely for Joseph to have traveled 50 miles from Harmony, Pennsylvania to the academic Bountiful of his region, Allegheny College and its amazing library. If he was actually able to frequent that library, it could have helped him find the word Nehem in Arabia enhance a verse or two, and the collection of books there could have helped on a variety of minor details in Joseph’s relentless quest to give us tantalizing evidences that wouldn’t be noticed for over a century. But as I said, I erred when I rashly argued that the 50 mile journey was just too far to be practical for him. I stand corrected–my apologies!

While Allegheny College is 50 miles away from Harmony, Pennsylvania, that town isn’t the Harmony where Joseph was translating the Book of Mormon. That was Harmony Township, Susquehanna County, Pennsylvania, which you can find by entering “Harmony Township, Susquehanna, PA” into Google Maps. You can also see that Joseph’s Harmony Township is actually around 320 miles from Allegheny College. Ouch. I was off by a factor of six. It’s closer to the medical library in Philadelphia which also had a book with a map of Arabia in it showing Nehem, but still way too far. (Click to enlarge.) 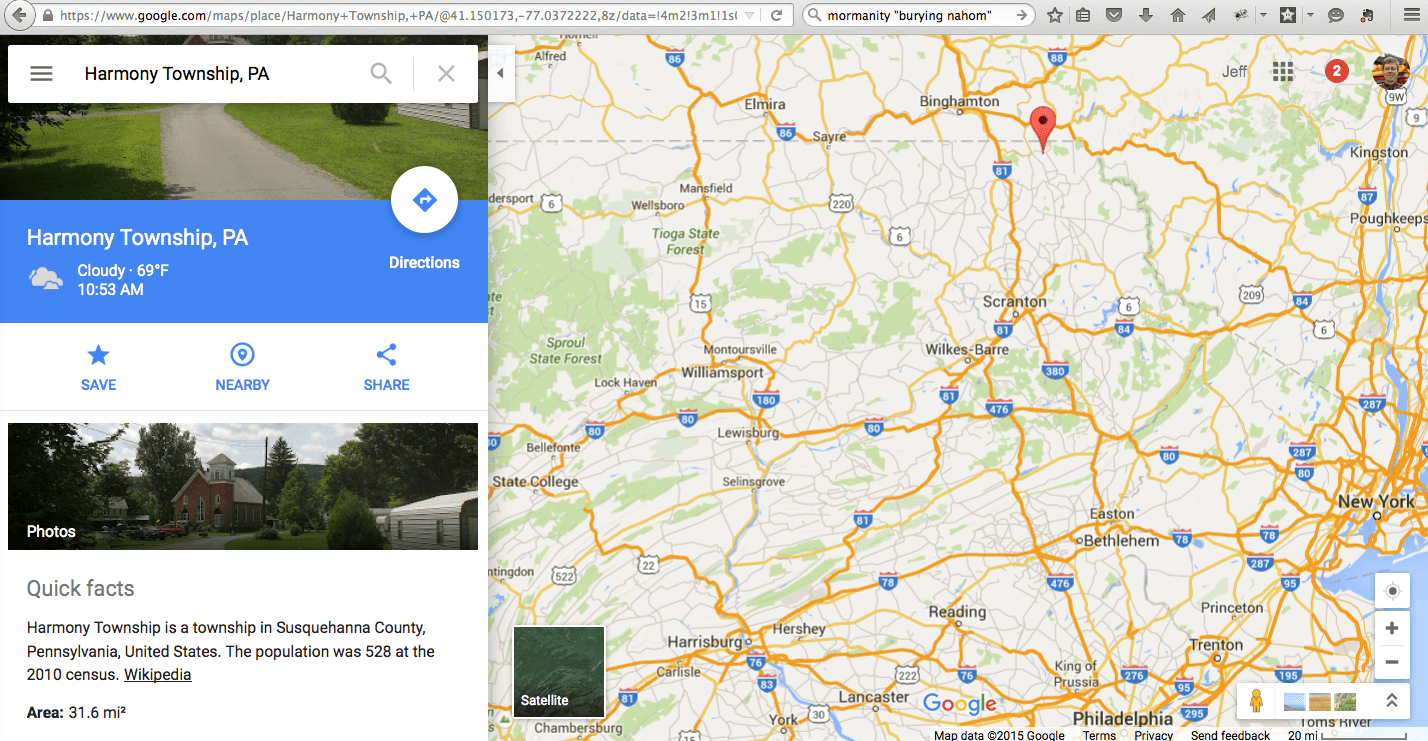 Kudos to the good folks at FAIRMormon.org for their helpful information (way down on that page) that exposed my blunder. Painful as it is, I have to give them credit and admit my mistake.  320 miles, not 50. So sorry!

For those who think they have a reasonable theory for how Joseph fabricated the Book of Mormon, if he did it with books and maps, it remains a mystery where and how he got them and, more crucially, how he could have used them to dictate the text we have.

As a reminder, the Arabian Peninsula evidence, as explained on my Book of Mormon Evidences pages, is about much more than just a lucky hit with the name Nahom. Nahom alone is cool, I’ll admit, being in the right place (right where you can turn due east off the ancient incense trails), and being an ancient burial place, and having archaeological evidence that the tribe with a related NHM name was in the region in Lehi’s day–not to mention the appropriate Hebrew word play that Nephi appears to have made, linking Nahom to mourning and murmuring. Oh, and did I say that if you go east from Nahom, you can in fact reach an excellent candidate (or two candidates) for the previously-alleged-to-be-impossible place Bountiful on the coast of Oman, which, in light of the extensive field work done there verifying the plausibility of the leading candidate (and some decent arguments for the plausibility of the runner-up), is now, of course, deemed to have been obvious and easily done by just, say, glancing at map of Arabia, which Joseph simply and obviously must have had access to?

But what could Joseph have gleaned from the best and most relevant Nehem/Nahom/Nehhm-containing map of his era, even if he did manage to steal off to a distant library, or if one came “nearby” as it floated along the Erie Canal (as some have suggested might have happened), which wasn’t very close to Harmony, either? Could he have come up with Shazer? The Valley of Lemuel? The place Bountiful? Yes, of course, if you have enough faith. Maybe not if you want to see a little evidence before you believe. Ah, a strange turn of events, with apologists poking the critics for some evidence. But they do have a case to make, a case we’ll look at in more detail in the near future.

As a more important reminder, no matter how interesting the Arabian Peninsula evidence is, there will always be plenty of room for doubt and reasonable arguments against it. I think that’s a vital part of the game here in mortality. The purpose of the evidence, in my opinion, is to help those who are willing to exercise faith to get over roadblocks and keep moving forward, in faith. Faith is required to accept the Book of Mormon–but it seems that faith of some kind is also required to accept theories that he fabricated all of its details on his own, with or without the help of the best libraries of his vicinity.

53 thoughts on “More Folly Around Nahom: This Time It’s My Blunder”