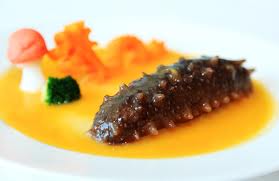 For lunch last week I strolled into a nice restaurant on Henan Street a little north of the Bund Center where I work and decided it was time to try a more expensive and seemingly interesting dish. The menu had a picture of large sea cucumber in a yellow sauce that looked pretty tasty, for those of us who like sea cucumber. It’s a delicacy here that I’ve had just a few times. The sea cucumber in the photo nearly spanned the diameter of a dinner plate, so it appeared. It also came with a little broccoli and a sushi roll that was maybe 2 inches in diameter, clearly less than half the length of the sea cucumber. 88 RMB, about $13–pricey, but I was tempted and ordered it.

When the sea cucumber came about 20 minutes later, the plate was a tiny saucer that one might use to serve dessert, barely bigger than a tea plate, and the sea cucumber was barely 2 inches long, spanning half the little saucer. There was no broccoli and no sushi roll, but a tiny wisp of a cabbage leaf was buried in the sauce. By taking small bites, I was able to stretch the sea cucumber out to make it last for two bites. Only two. I also had a few dainty spoonfuls of the pale flavorless sauce. That was my lunch. (Dining tip: sea cucumbers can be delicious, but they pretty much just soft cartilage with very few calories. If you are hungry before eating one, you could still be hungry after, even with a giant serving.)

When the waitress came by, I asked her why the sea cucumber was so much smaller than the photo. She found a large dinner menu that I had not ordered from and showed me some fine print in English inside. It said something characteristically helpful like, “Some photographs the reference time to consideration customers.” I remained friendly but explained that this did not remove my concerns and that I was quite unsatisfied, but went ahead and paid in full.

In China, employees usually aren’t trained to do anything to resolve customer complaints, so when there is a problem, they might make excuses or just shrug it off or maybe say they are sorry but rarely take any steps to deal with concerns, so I didn’t expect her to do anything. But before I left, I did go talk to the boss, a middle-aged woman behind the front counter. Staying friendly, I opened up the menu and explained that there seemed to be a problem with my order. The photo looks like a big sea cucumber, but what they bring is very small. Plus there was no sushi roll and and broccoli.

The boss said that all their sea cucumbers are that size, and then kindly pointed to a string of text in Chinese on the little lunch menu I had used. The Chinese said what I think the English on the dinner menu was trying to say: “Photographs are only for reference.” Oh, sore of like photographs on food packaging in the States having the disclaimer “serving suggestions only.”

Keeping a big smile, I said, “Oh, so the pictures don’t really describe what the food will look like.” She nodded, pleased that I got the idea. She obviously felt that my problem was now resolved. To clarify, I continued, still smiling: “So the food in the photo can be large, but the food you bring can be small.” “Yes, yes,” she nodded. I’m sure she wished all foreigners were such quick learners. “Or the photo can show lots of things, but what you give can be missing pretty much everything.” Yes, she nodded and smiled. You’ve certainly got it, Mr. American. Well done.

One important thing to remember in China is that American-style sarcasm is usually incomprehensible. She didn’t seem to recognize that I was making a critical statement. So now it was time to be a little more direct, but still friendly: “I see. But I feel, perhaps, that this is a problem, and am not too happy. But thanks anyway.” And still smiling, I walked out–probably for my last time.

In the Church, we have related cultural gaps and differences in expectations. We have people walk into our midst from many walks of life who sometimes feel that the way we advertise our religion doesn’t match what they encounter. Anxious to be fed, they may walk out missing the feast they wanted to find, disappointed that we didn’t do more to understand and meet their needs.

The Gospel and the Church have a lot to offer, with wonderful, delicious fruits that come from living its principles. There can be many spiritual feasts along the way. But sometimes things go wrong and sometimes our service results in a few empty bites when much more was expected. This is where we need to enhance our own customer service orientation, our own willingness to understand what newcomers and struggling old-timers and all those we minister to are facing and struggling with. When they have disappointments and problems, the correct answer is not to shrug it off and do no nothing. Pointing to the printed text of the scriptures may help, but just telling people to read and pray and deal with everything on their own is not the level of attentiveness that people need.

I believe that most of the problems and pains of membership in the Church can be faced and overcome by all members, new and old, IF they are given help and attention in their trials of faith. We may not have all the answers, in fact, we certainly do not, but we can serve, love, sympathize, and listen, and that’s half the battle. While professing to help those in need of help and and to mourn with those who mourn, we also need some among us who can groan with those who groan over the struggles they face from opposition, from blemishes in our history, from troubling issues and tough questions. These co-groaners, of course, should also be equipped with some of the knowledge and resources that come from   faith in action, serious Gospel study, and familiarity with resources like the Mormon Interpreter, FAIRLDS.org, and the Maxwell Institute. And if you throw in a little of my LDSFAQ (Mormon Answers), that’s OK, though it’s a weaker resource with plenty of limitations.

I believe there are some good people who have left our midst who would have been retained if there had been a few people more willing to listen and help in times of difficulty, especially in times of doubt and spiritual crisis. Next time someone feels they’ve been given a mere bite of cartilage when they expected a feast, let’s help them to find more and to want to keep coming back for more. That’s my serving suggestion based on lessons from a Shanghai restaurant.

2 thoughts on “For Reference Only: A Serving Suggestion from a Shanghai Restaurant”