In a previous post, I discussed William Schryver’s 2010 presentation that pointed out some surprising connections in the Kirtland Egyptian Papers that are related to the Book of Abraham project. Schryver’s presentation, “The Meaning of the Kirtland Egyptian Papers” at the the 2010 FAIRMormon Conference is preserved in two Youtube videos, Part 1 and Part 2.  Schryver points to the many non-Egyptian characters in the KEP and also links some of the definitions in the KEP to the Doctrine and Covenants, both issues that show that translating the Book of Abraham from Egyptian scrolls probably was not the intent of the work. Rather, he sees some of the documents as an effort to create a reverse cipher for converting English into code. Whether the reverse cipher theory has merit or not, the observations about the nature of the “Egyptian” and relationships between various documents merit further scholarly attention.

Schryver points to Doctrine and Covenants 76 as a source for several consecutive KEP explanations. In the Grammar and Alphabet of the Egyptian Language, there are passages that refer to the Celestial Kingdom and two lesser kingdoms (parallel with the Terrestrial and Telestial Kingdoms in Section 76). Schryver’s point seems valid: Phelps was drawing upon text from the existing Doctrine and Covenants for some of his explanation of “Egyptian” characters. Here is a screenshot of the relevant portion of the video, occurring around 2:00 minutes into the Part 2 video: 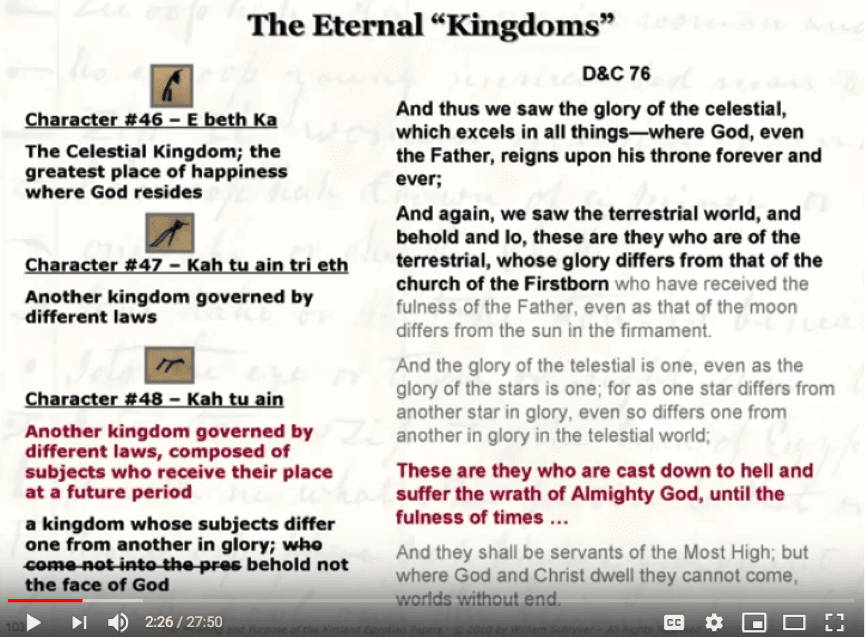 For those using volume 4 of the Joseph Smith Papers, Revelations and Translations series (JSPRT) to study any of these issues, or using other sources to see the Kirtland Egyptian Papers, I should explain that Schryver is combining information from two documents. He’s using the Egyptian characters in the order they appear in the Egyptian Alphabet C document (“Egyptian Alphabet, circa Early July–circa November 1835–C” in JSPRT vol. 4, Book of Abraham and Related Manuscripts), and adding the more complete explanations for these characters in the Grammar and Alphabet of the Egyptian Language (GAEL, the “Grammar and Alphabet of the Egyptian Language, circa July–circa November 1835” in JSPRT vol. 4). His Characters #46 to #48 are labeled in JSPRT vol. 4 as Characters 2.23, 2.24, and 2.25, respectively. Like many of the “Egyptian” characters in the Kirtland Egyptian Papers, these symbols don’t appear to be on the papyrus fragments (relying here on the very helpful “Comparison of Characters” section in the back of JSPRT vol. 4).

His find of a parallel to Doctrine and Covenants 88:24 is also interesting. Continuing after the three characters related to Section 76, the next character in Egyptian Alphabet C, labeled Character #49 (of the EA C) by Schryver but Character 2.26 in JSPRT vol. 4, is another character that doesn’t appear to be on the papyrus fragments. It has no explanation in the Egyptian Alphabet C document but is described as the “least kingdom, a kingdom without glory” in the GAEL, very similar to Doctrine and Covenants 88:24 which dates to Dec. 1832, long before the Egyptian scrolls were acquired in 1835.

Thus in succession in the Egyptian Alphabet C, from Character 2.23 through 2.26, are four characters whose description in the GAEL deals with the three kingdoms of glory, beginning with the “Celestial kingdom” and drawing upon Doctrine and Covenants 76, and then the fourth character pertains to a kingdom of no glory per Doctrine and Covenants 88:24. And none of that has anything to do with the Book of Abraham nor, apparently, with the scrolls that we have. 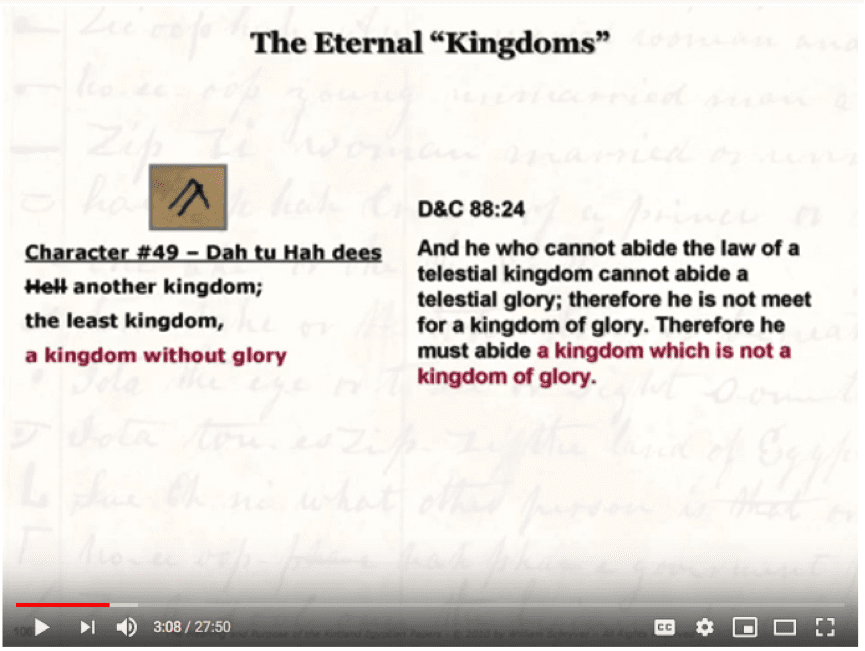 One connection that Schryver didn’t mention involves the character right before his sequence, Character 2.22 (or Character #44 using his counting method). The name and explanation in the GAEL (p. 31 of the GAEL, p. 177 of JSPRT vol. 4) is:

Ebethkuaintrieth— a place beyond this earth a future place of existence, a place of residenden beyond this earth; the ceceles=tiale world; the heavenly bodies; the earth in its most sanctified state as it shall be= eternity.

Q. What is the sea of glass spoken of by John, 4th chapter, and 6th verse of the Revelation?

A. It is the earth, in its sanctified, immortal, and eternal state.

It’s building on the theme of the Celestial Kingdom in Section 76. But this language will also be used again in the 1843 revelation in Doctrine and Covenants 130, where verse 9 tells us that the earth in its “sanctified and immortal state” will be a Urim and Thummim to its inhabitants. Interesting connections.

Why was Phelps drawing upon language from the Doctrine and Covenants? Not sure. But it seems like something besides translating Egyptian from the scrolls is going on. I’m not convinced that a reverse cipher project was underway, and prefer to think this was some aspect of pursuing “pure language” work that was soon abandoned. Thoughts?

Update, June 8, 2019: One more connection may involve Character 2.40 in JSPRT vol. 4. According to W.W. Phelps in the Grammar and Alphabet of the Egyptian Language (GAEL), Part 2, Degree 2 (see the transcript of the GAEL on the JSP website), this character refers to “a messenger having performed certain acts, having been delegated with supreme power for a fixed period of time: hereditary, coming down from father to Son: right of authority from eight days old: according to the law of priesthood.” This seems to refer to Doctrine and Covenants 84:28, which speaks of John the Baptist (a messenger) who was ordained at the age of eight days:

28 For he was baptized while he was yet in his childhood, and was ordained by the angel of God at the time he was eight days old unto this power, to overthrow the kingdom of the Jews, and to make straight the way of the Lord before the face of his people, to prepare them for the coming of the Lord, in whose hand is given all power.

Related to the theme of divinely commissioned messengers, Doctrine and Covenants 93:8 speaks of Christ as “the Word, even the messenger of salvation,” of which John the Baptist bore witness. Perhaps this related to Character 2.36 on p. 27 of the GAEL (p. 169 in JSPRT vol. 4):

Is the authorized messenger “Jah ni hah” derived from the name John?

Jah-ni hah: one delegated from the highest soar [sons?] acting in or b[e]ing clothed with the power of an other; one from sent from the Celestial Kingdom

Looking again at Doctrine and Covenants 93, verse 29 tells us that “man was also in the beginning with God,” which relates to Character 2.2 in JSPRT vol. 4, where all four of the explanations in the KEP begin with “in the beginning with God.” Another relationship related to beginnings involves Doctrine and Covenants 84:16, telling us how Abel received the priesthood “by the hand of his father Adam, who was the first man,” which relates to Character 2.10, for which all four entries in the KEP give the explanation, “Adam or the first man, or first king.”

Now consider Doctrine and Covenants 88 again in a passage talking about the divine roles of light and its power in governing God’s creation and in affecting heavenly bodies:

9 As also the light of the stars, and the power thereof by which they were made;

10 And the earth also, and the power thereof, even the earth upon which you stand.

11 And the light which shineth, which giveth you light, is through him who enlighteneth your eyes, which is the same light that quickeneth your understandings;

45 The earth rolls upon her wings, and the sun giveth his light by day, and the moon giveth her light by night, and the stars also give their light, as they roll upon their wings in their glory, in the midst of the power of God….

Flos isis— The highest degree of light, because its component parts are light. The gover[n]ing principle of light Because God has said Let this be the centre for light, and let there be bounds that it may not pass. He hath set a cloud round about in the heavens, and the light of the grand gover[n]ing of <​15​> fixed stars centre there; and from there its is drawn, by the heavenly bodies according to their portions; according to the decrees that God hath set, as the bounds of the ocean, that it should not pass over as a flood, so God has set the bounds of light lest it pass over and consume the planets.

The concept of bounds of the ocean in verse 90 may be too distant from the governing law of light in verse 13 to be clearly connected, but there are still interesting echoes of Section 88.

Other parallels are found by considering some cosmological information in the Book of Abraham and comparing it to Section 121. Facsimile 2, Fig. 5 refers to the moon, earth, and sun and their “annual revolutions,” while Abraham 3:6 speaks of “set time” of rotating heavenly bodies, namely, the earth, the moon (the lesser light), and the sun (the greater light). Compare this to Doctrine and Covenants 121:30-31, in light of the above-mentioned Character 2.39 with its reference to the bounds of the ocean that echo Doctrine and Covenants 88:90:

30 And also, if there be bounds set to the heavens or to the seas, or to the dry land [earth], or to the sun, moon, or stars—

Doctrine and Covenants 121 dates to March 20, 1839, after the 1835 translation work for the Book of Abraham, and appears to draw upon the unusual “set time” language from Abraham 3:6. Some argue that Abraham 3 and possible Facsimile 2 came later, around 1842, but John Gee and others have argued that most of the book was probably translated (at least a first draft) in 1835, though some Hebrew works in the transliteration system of Joshua Seixas may have been added later after the Saints studied Hebrew in 1836. The relationship the Abraham 3:6 and Doctrine and Covenants 121:30-31 suggest that Abraham 3:6 was translated before 1839, and thus probably in 1835 since there was very little done with the Book of Abraham between 1836 and 1842.

Consideration of the intertextuality with the Doctrine and Covenants puts some bounds on the dating for the translation of the Book of Abraham, favoring much of the book having been translated early rather than in 1842. It also reminds us that whatever the purpose of the puzzling Kirtland Egyptian Papers, the presence of text from the Doctrine and Covenants, along with an abundance of “Egyptian” characters that are not Egyptian, indicates that its purpose may have been something other than trying to translated the real Egyptian on the scrolls.