One of the advantages of working in China is having long national holidays like the Chinese New Year, making it easier to take interesting trips to other lands. There’s a big incentive to do so, for staying in the country while several hundred million people are traveling can be quite challenging for foreigners not used to coping with the world’s biggest mass exodus ever. For New Year’s holiday in February, we joined a group of friends from Shanghai and made a temporary exodus to Israel, the original Promised Land (not the current one in Shanghai, China, which is truly the most exciting place I’ve ever lived and perhaps ever visited). In addition to Israel, we also made a brief journey in Jordan to see one of the wonders of the world, Petra in the beautiful nation of Jordan. Here are some scenes from the trip and a few observations on particularly interesting things I saw with relevance to issues sometimes discussed here at Mormanity.

Here’s what you see while attending sacrament meeting (on Saturday) at “Mormon University” in Jerusalem, also known as the BYU Center, near the Mount of Olives. I’ve never attended a sacrament meeting with a more stunning view behind the pulpit.

It’s interesting that one place where the name “Mormon” will continue being used in all its glory to refer to the Church and its operations is “Mormon University.” Mormon University is the name the officials want to be used and it is prominently displayed on some road signs leading there. It presents much less trouble that having the official name of the Church be displayed in a land where there are great sensitivities over religion and even tougher rules against proselyting than we face in China. In Israel, to attend a religious service at Mormon University, you need to already be a baptized member in addition to having a foreign passport (as China requires). In China, though, we are free to invite other foreigners to our services, and local Chinese members can in some major cities have their own services. Things are very strict in Israel, so be careful and don’t stir up trouble when you go by attempting any missionary work at all. Be respectful of the rules there!

There is so much to see in Israel. One of the things I have long yearned to see was the document with these words, “Alma son of Yehudah” (אלמא בן יהודה), showing that the long-mocked name Alma is not merely a Latin female name sloppily plagiarized by Joseph Smith, but an authentic ancient man’s name. I wasn’t able to see the document in a museum, but could see a photo of it in a book I just purchased. Here is the document, a deed from the era of the Bar Kochba revolt found by Yigael Yadin, one of the most famous archaeologists of Israel. The name “ALMA” is underlined with white in this photo (click to enlarge). 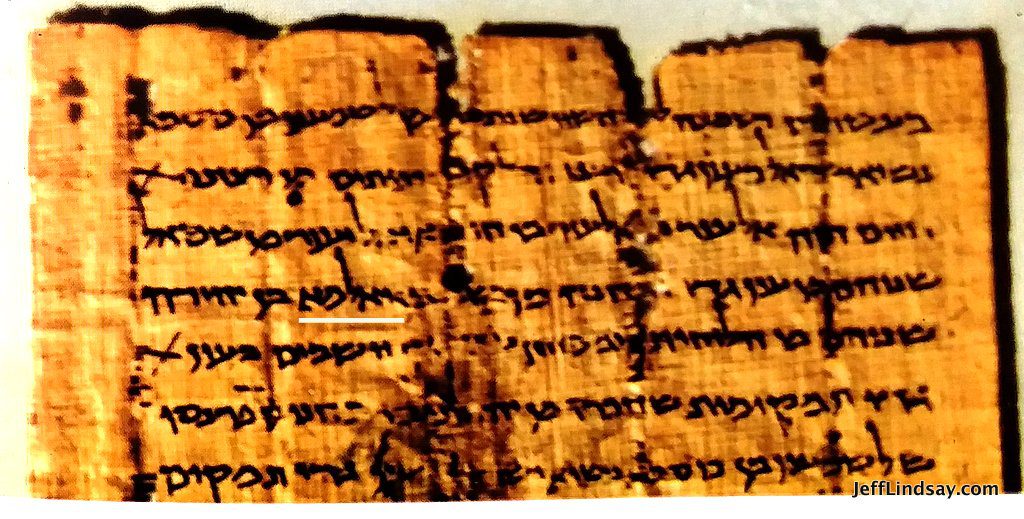 The source is Yigael Yadin’s classic work,  Bar-Kokhba: The rediscovery of the legendary hero of the second Jewish Revolt against Rome (New York: Random House, 1971), p. 177, which depicts a deed from around 132 A.D. A more complete black-and-white image of the full deed is also shown in Terryl L. Givens’ book, By the Hand of Mormon: The American Scripture that Launched a New World Religion (Oxford: Oxford Univ. Press, 2002), p. 140:

Here is what the document looked like before it was opened (also Yadin, p. 177):

The translation from Yigael Yadin of the relevant text reveals that Alma was the name of a Jewish male in antiquity, not merely the female Latin name that some critics have criticized for decades:

On the twenty-eighth of Marheshvan, the third year of Shimeon bar Kosiba, President of Israel; at En-gedi. Of their own free will, on this day, do Eleazar son of Eleazar son of Hitta and Eliezer son of Shmuel, both of En-gedi, and Tehina son of Shimeon and Alma son of Yehudah, both of Luhith in the coastal district of ‘Agaltain, now residents of Engedi, wish to divide up amongst themselves the places that they have leased from Yehonathan son of Mhnym the administrator of Shimeon ben Kosiba, President of Israel, at En-gedi. … [Yigael Yadin, Bar-Kokhba (New York: Random House, 1971): 176].

Long ago I read that this document featuring the name Alma was prominently displayed in the Shrine of the Book Museum in Jerusalem, so seeing that museum was high on my list of things to do while there. Sadly, it is no longer on display there. Not sure where it is now. I asked some of the staff there and in the adjoining National Museum but could not find it. If you know where to see it, please let me know.

Another highlight of our visit was the chance to see with my own eyes the earliest scriptural text discovered so far, a brief excerpt from Numbers that dates to the time of Lehi and Nephi, around 600 B.C. This little text was written on thin silver, a silver scroll serving as an amulet of some kind. How interesting that the earliest scriptural text was written on precious metal, akin to the Book of Mormon and the brass plates. Further, this precious find shows that a passage of Numbers long held to be a late creation from after the Exile was actually known in Lehi’s day (reducing the impact of arguments against the Book of Mormon for relying on passages in the Pentateuch that allegedly were late creations). Here is what I saw in the Israeli National Museum:

No, they don’t look like the gold plates or brass plates, but they do represent an ancient tradition of preserving scripture, and the choice of a precious metal is entirely logical.

Also at the National Museum, we learned about the ancient temple at Arad, a place outside of Jerusalem that also had a Holy of Holies and was a site were sacrifices were altered. It was destroyed — or rather, gently taken apart and buried — during the reign of Hezekiah. It was not desecrated. One argument is that he took it down and buried it to preserve the sacred site as the Assyrians were coming, much as the Latter-day Saints in Utah buried the ongoing work on the Salt Lake Temple when government troops were coming to possibly invade the city. In any case, the temple/shrine at Arad lends support to the notion that people like Lehi and Nephi could have dared to offer sacrifice outside of Jerusalem and even to later build a temple in the New World, just as Jews in Egypt did at Elephantine. 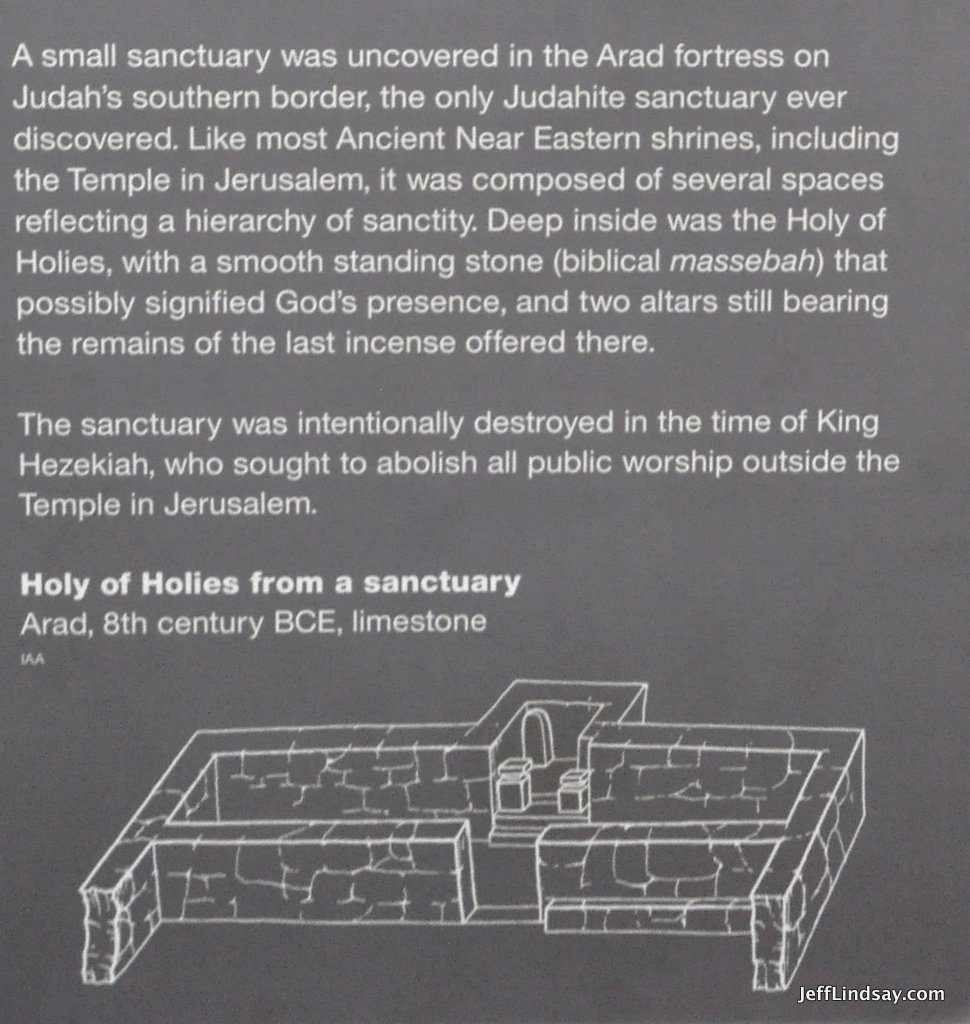 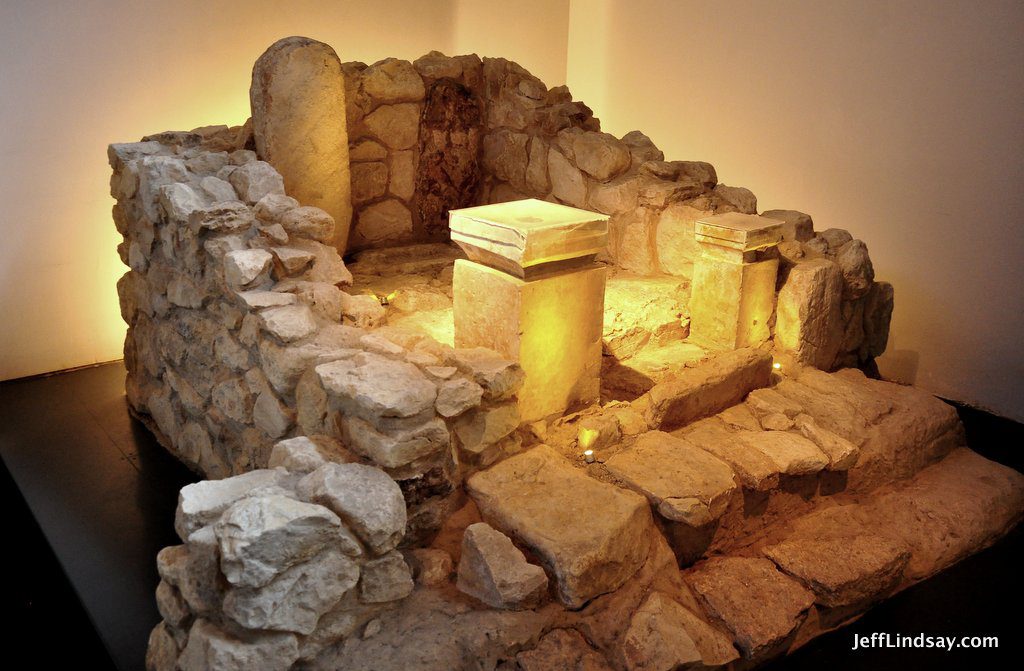 We also saw the following example of a tablet with a wax coating for writing, an instrument that may be the “sticks” of writing from Ephraim and Judah mentioned in Ezekiel 37. 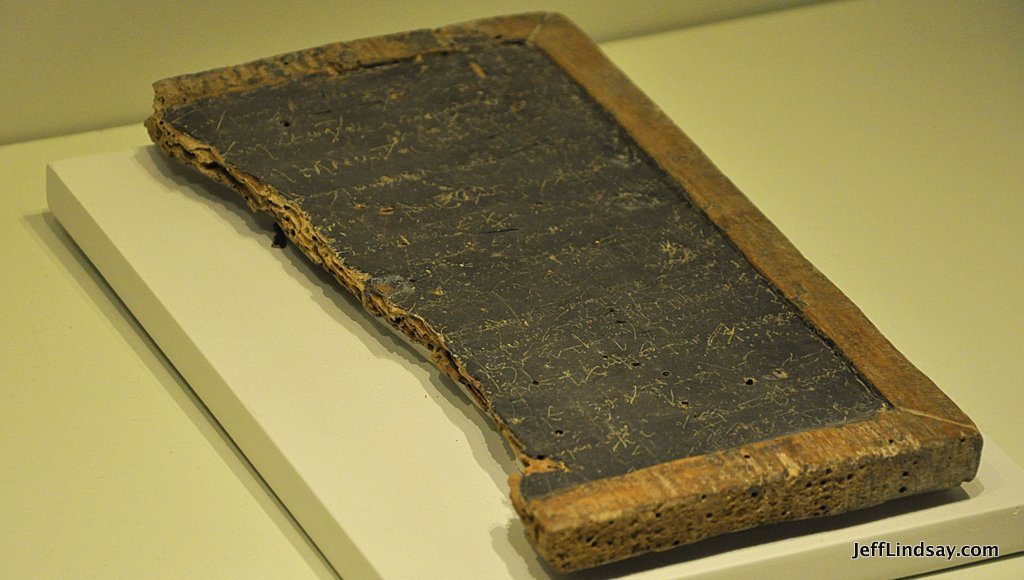 Another interesting exhibit deal with crucifixion. Here a nail through an ankle shows how crucifixion may have been done for many. Not quite the way I always imagine it. 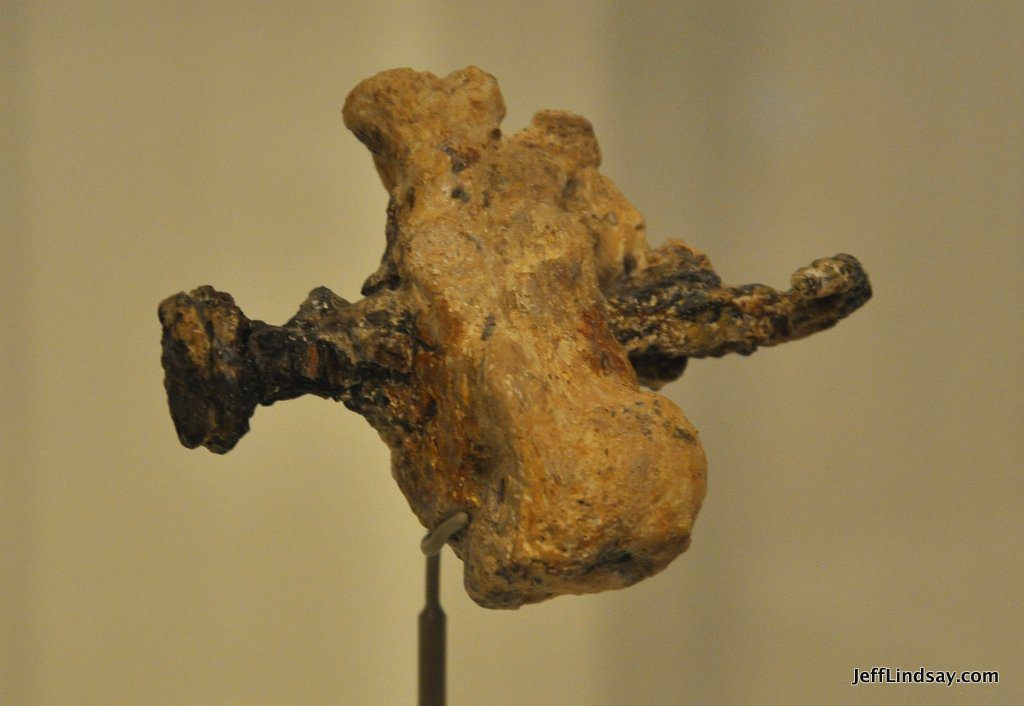 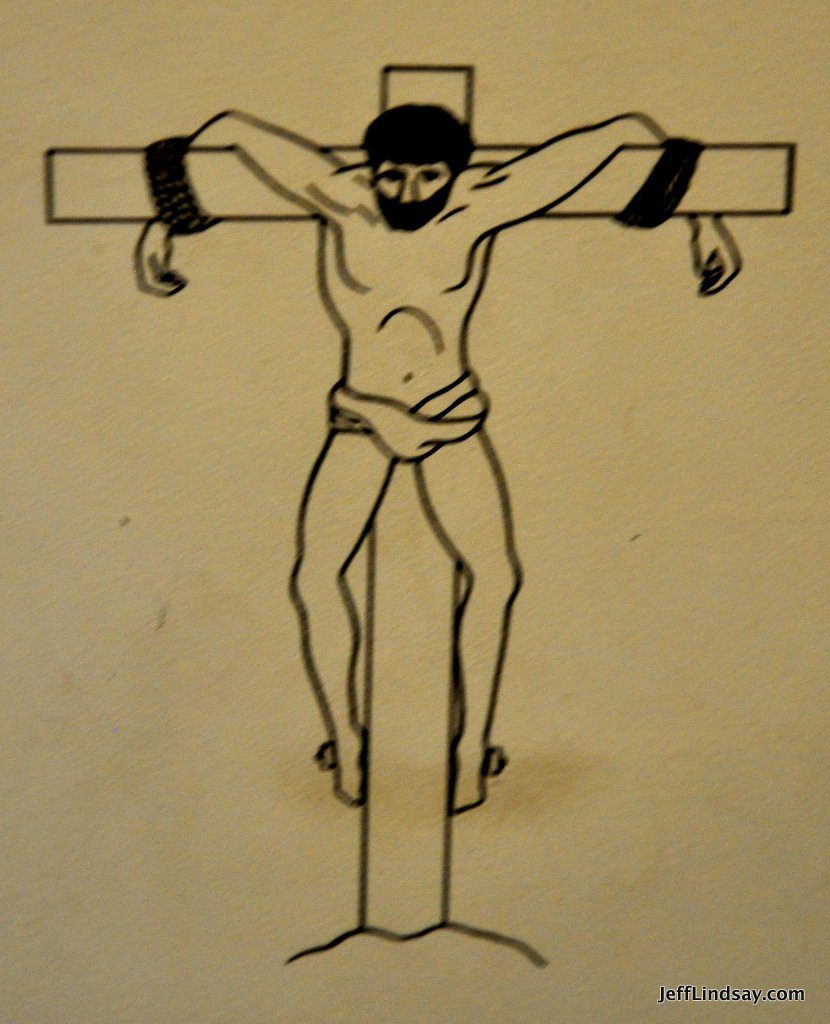 While in Israel, we also took some time to visit Jordan and see the remarkable wonder, Petra, where a vibrant community 2,000 years ago carved numerous edifices out of sandstone. Simply amazing. I was deeply moved by the friendliness and hospitality of the Jordanians I met and am anxious to return. 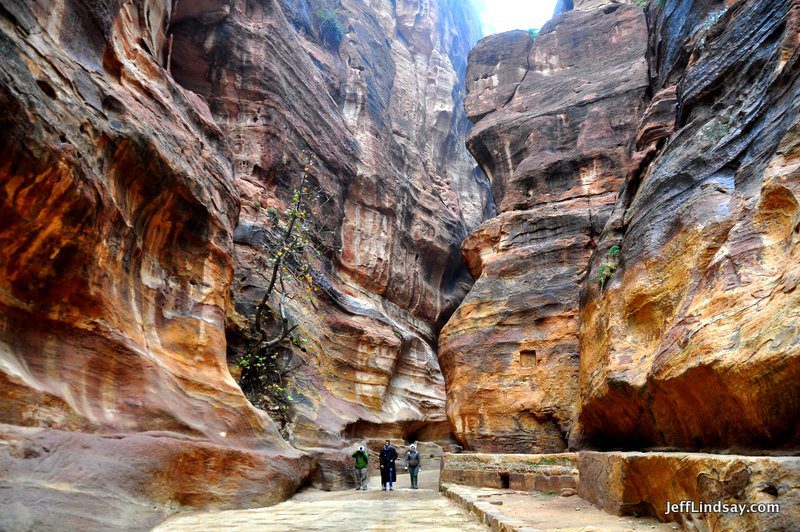 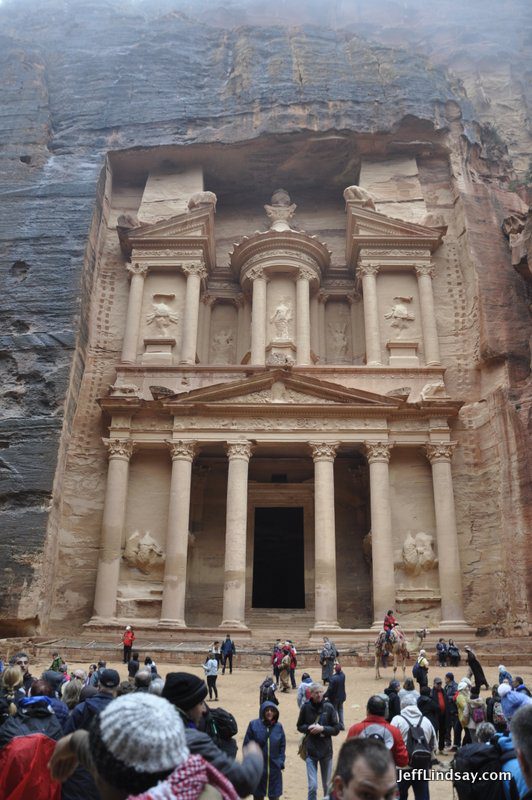 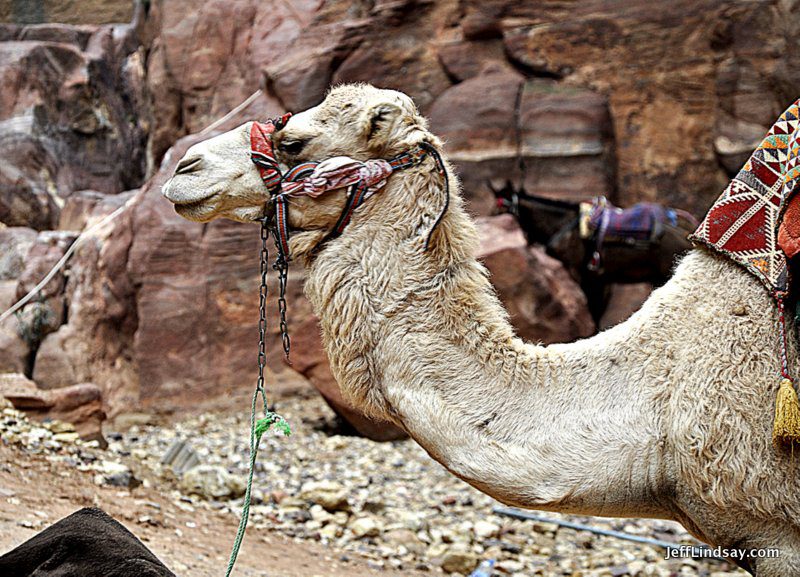 Can’t wait to return! Loved Israel and Jordan, including the people, the food, and the sites. Fabulous places!