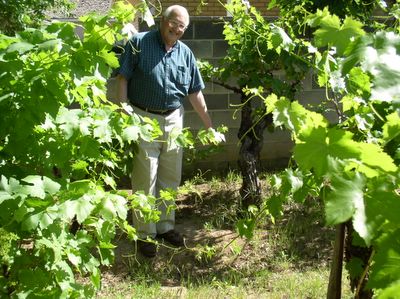 My father, William Dean Lindsay, showing the spot on my grandmother’s property where he found his wedding ring many years ago as an answer to prayer.

Here’s the story: Shortly after he was married, my father took my mother from Salt Lake down to St. George, Utah to visit her family (Maurice Jarvis Miles and Mary Lyon Miles). My mother’s parents had a large backyard with many grape vines. My parents spent a lot of time in the backyard and picked many grapes, some of which they took back with them to Salt Lake. On the way back, just a few miles outside of St. George, my father realized that his wedding ring was missing. He guessed it must have fallen off while he was in the backyard, probably while picking grapes. The area where it could be was so large that it seemed hopeless to even look for it. They debated whether to go back or not, but decided to try to find it. First, though, they prayed for the Lord’s help.

When they got to my grandparents’ home, my Dad walked among the many rows of grapes and felt prompted to turn right at a particular point. As he turned and moved down they row, he immediately saw a glint of sunlight reflected from something on the ground – his ring.

He related this story as we were walking together in the backyard of my grandmother’s home last May while we were in St. George for her funeral. He recalled the spot where he found the ring and pointed to it while I snapped this photo. Thanks, Dad!

That simple story reminds me of the day I recall the beginning of my own personal testimony about the power of prayer. I was six years old and had been having fun with a little magnifying glass my Dad lent me. I thought it was precious and thought he needed it for his job – now I realize it was a cheap plastic one with a value of about 10 cents. Unfortunately, I lost it during the day, and felt a great need to find it before my Dad came home. I thought I looked everywhere, but couldn’t find it. I remember my mother’s teachings about praying for help and decided that this was a time when I really needed God’s help. I closed the door to my room, got on my knees and prayed for help to find the magnifying glass. As soon as I finished, I looked at my chest of drawers, walked over to it, opened a middle drawer, moved something, and there it was. I found it immediately after prayer. As a six-year-old, I had just experienced a direct answer to prayer, something that would be repeated many times in my life.

One of the greatest things my parents did for me as a child was to teach me to pray. How grateful I am for that gift from them, and for the reality of a Living God who hears us – and sometimes grants us answers that we can recognize as gifts from Him.

1 thought on “The Ring in the Vineyard: A Story from My Father’s Life”