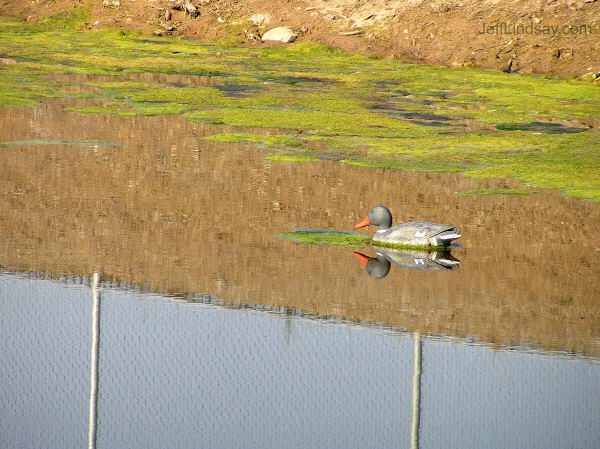 I saw an unusual duck this week right after dropping my youngest son off at his school (yes, it’s summer vacation here, but he’s being exiled for a week to the wilds of Wichita as punishment for the freshman prank of hanging out with a forensics gang and qualifying for the national forensics competition). I don’t know much about ducks, but it sure looked interesting, sitting there in the middle of a containment pond near the high school. Since I’ve often regretted not stopping to take advantage of photo ops, I pulled the car over, dashed across the street and quietly approached the fence around the pond in order to take some photos.

The strongly colored beak of the duck caught my eye. While he was too far away to see in much detail, the 10x zoom on my camera would allow reasonable photos to be taken. I was happy to be capturing such an interesting duck. I took a few shots, then tried a different position, different angles, different camera settings. Lots of fun! The duck didn’t seem to mind, and just kept floating in the middle of the pond, apparently content to be near a pile of duck weed or something green. He shifted position gently as the winds changed, but otherwise didn’t seem too nervous.

I had a lot of work to do and really couldn’t afford the delay of shooting a bunch of photos, but felt it was worth it for such an unusual find.

Later in the day when I looked at my photos, I was pleased with the results. But something about this duck struck me as I zoomed in. Ah, yes, the eyes. Looking into those cold, blank, beady eyes reminded me of some past conversations with religious bigots. No, that’s not fair – this duck actually seemed rather benign. Benign in the sense of inanimate. Inanimate? Good grief, this was a decoy. 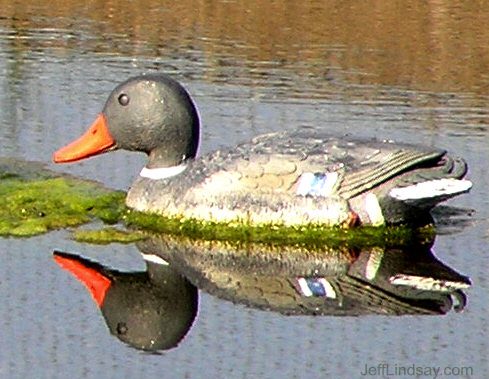 I had been decoyed, suckered into wasting my time on a wild duck chase. I was so intent on framing the photo, capturing the colors I wanted to highlight, and exploring different angles to tell some kind of story that I never bothered to actually understand what I was photographing. It wasn’t a duck at all. Had I been more observant, I would have realized that it wasn’t swimming or moving its head or doing anything except shifting in the wind. It was a stupid floating decoy, but I was so caught up in photographically sharing what I thought I had found that I never bothered to grasp what was in plain sight before me.

My snap judgment on first glance – “this is a pretty duck” – was all that I allowed into my head, in spite of the stream of neglected evidence that came during my subsequent but distracted observation. Like I said, I don’t know much about ducks, and as a result of my little diversion, I realized that I know even less than I thought.

Now this event can be applied in many ways, but here’s one spin. Many people make snap judgments based on their first glance at a subject that they know very little about, and hold that errant opinion even after they think they have explored many angles and done a lot of observation. I see some of this among parts of the anti-Mormon crowd and the “anti-cult” gang. While there are plenty of us Mormons who don’t know enough about their own faith, the problem is especially serious among those who think they have spotted a cult and spend all sorts of time “observing” and denouncing the Church, ignoring the steady stream of data before their eyes that might suggest what they have found is not a demonic organization, a scary cult, a source of evil, or anything to bemoan at all. Through the decoys of men, they’ve been deceived, suckered into fighting against something wholesome, perhaps even something with divine origins (in spite of the many failings of the humans within it). If they would only look carefully and observe with a more open mind, they might realize that their anti-cult efforts are a horrendous waste of their time, and worse.

Don’t be fooled by imitations or deceived by decoys. Look for the real thing, the one with wings.

8 thoughts on “The Parable of the Duck”