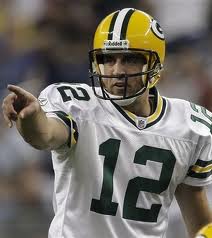 I live just 30 minutes away from Green Bay, Wisconsin, a.k.a. the Center of the Football Universe. Though I’m not a huge football fan, it’s a privilege to be in a region with such a great legacy of excellence. As dramatic as the Packers games can be, some of the most important drama occurs off the field. One touching example was shared by an observant reporter in Milwaukee who attended a charity event that Aaron Rodgers did for the MACC Fund (Midwest Athletes Against Childhood Cancer).

“‘Save me a spot’: A side of Aaron Rodgers you may not know” by Jen Lada of WITI-TV in Milwaukee gives some great insights into Aaron. I was thrilled to see that Aaron’s favorite book is the Bible. Wow. I was also thrilled to see that we share the same favorite movie, The Princess Bride. But I was caught by surprise and a bit of emotion with the dedication that he wrote that night on a father’s football, something that wasn’t done for show but was simply a reflection of the mindset and compassion of this real hero.

Rodgers’ answers and poise on this night were certainly admirable. And I honestly didn’t think I could respect Aaron more than I did when we wrapped our hour-long question and answer segment. But I was wrong.

My friend, the father of that young girl who passed, was there that night – enjoying the opportunity to reconnect with many of his MACC Fund family members and revel in the charity’s big night. He was one of several attendees brought up on stage where he caught a football thrown by the quarterback of the Green Bay Packers. The evening was already a smashing success for him and his grateful family.

And then he asked Aaron to sign the football he’d caught. He wondered if he’d make it out to his daughter. It isn’t shocking that Rodgers obliged. What caught me off guard was the dedication he made. It wasn’t until after Aaron left that I first saw the autograph… and the simple yet sweet message that brought tears to this father’s eyes: “To Cheri the angel. Save me a spot. – Aaron Rodgers”