In the summer of 2002, moments before my eldest son entered the MTC for his mission in Argentina, he was approached at the hotel by a woman who said she had an assignment to get a photo of some missionaries for use by Lladró, the famous porcelain figurine maker in Spain. He said OK and let her take some photos of him holding some scriptures.

My wife has long wondered if they ever made anything based on his photos. That question was answered last week when we spent a few days in Barcelona, Spain (based on a very low-cost travel deal she learned about from Clark Howard). We walked into a Lladró shop in the heart of Barcelona and were amazed to see a figurine of two missionaries, right below one of the Christus. The elder holding the scriptures open appears to be my son. He was wearing a striped blue tie just like the one in the figurine, gray pants, short sleeves, and the face and hair look a lot like him. It just came out last year. We’re pretty sure that’s him. How strange! I haven’t had time yet to take a decent photo, but here are some quick shots in bad light, one from our dim hotel room. Yes, I buckled and bought one, contrary to my normal tightwad approach. (Barcelona, by the way, is one of the most wonderful cities I’ve visited. Especially love the architecture, the food, the big market, and the old city.) 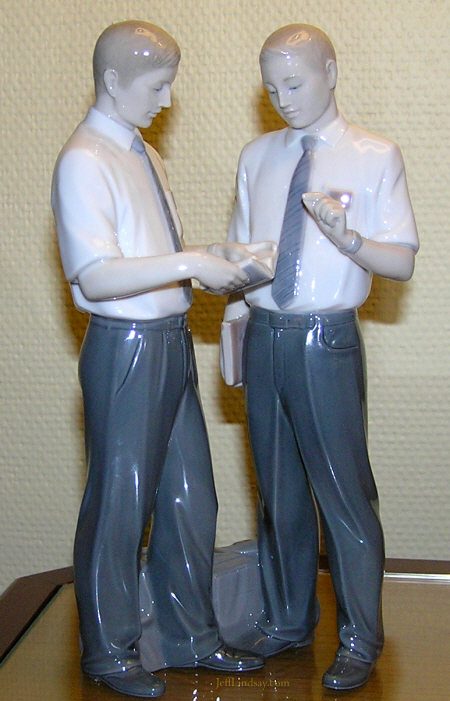 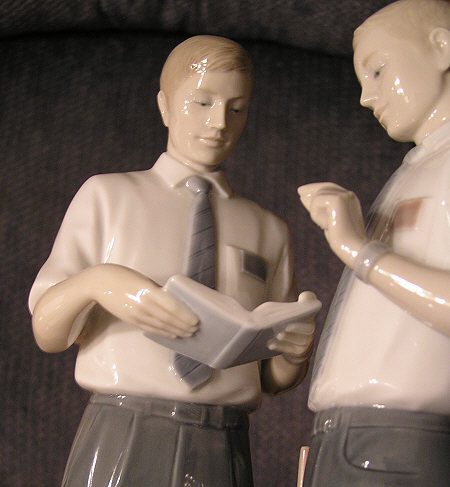 10 thoughts on “Finding My Missionary Son in Spanish Porcelain”