Tonight I had a break from the rigors of an intellectual property strategy course I’m taking in Las Vegas, leaving me with enough time to participate in a session at the LDS Temple here. Best show in town! A bit pricey when tithing is considered, but unlike most of the attractions here, you’re almost certain to leave this establishment better off than when you came.

It’s a pretty temple from the outside, but the majesty of its celestial room caught me by surprise. What fabulously beautiful architecture! Bold lines, gentle curves, sweeping diagonals, an intricate sun theme, beautiful windows and lighting, in a bright, open, and very light presentation that cheers the heart.

The Las Vegas Temple gets my award for Best Celestial Room. And it’s literally just minutes away from Paradise – without any need to depart from your mortal body. (Paradise is a poorly named unincorporated township next to Las Vegas that includes much of the Strip.)

It was built in 1989, yet looks as fresh and new as if it had just opened. It’s on the western eastern foothills overlooking the city and can be seen from many parts of town. In fact, I can see it from the window of my cheap hotel room on Las Vegas Boulevard (comfortably away from the main Strip).

I got there after the sun went down, but was still able to get a few photos. Here’s one: 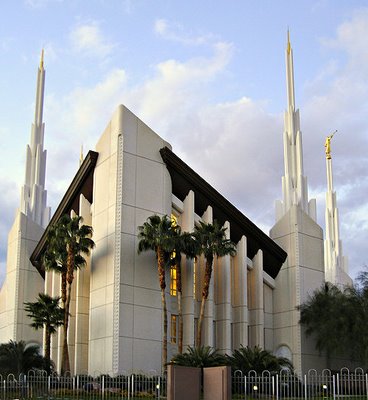